The future of Sidmouth's hospital: to be considered Thursday 2nd March

The pictures emerging over the future of our health service are confusing and opaque:
Futures Forum: The future of East Devon's hospitals: keep informed!

There are still several unanswered questions:
Futures Forum: The future of Sidmouth's hospital: a question of ownership 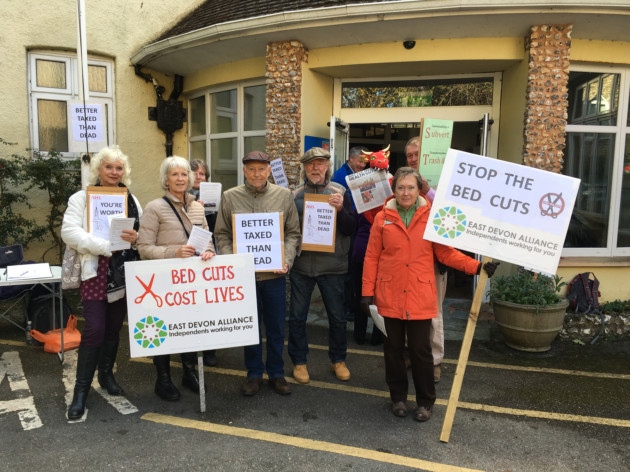 Hope that ‘common sense will prevail’ as health bosses set to consider bed cut proposals
Campaigners say the fight for NHS services is far from over as Sidmouth prepares to hear the fate of its vital inpatient unit.
Health bosses are set to consider plans to axe the number of community hospital beds in East Devon by 54 per cent on Thursday (March 2).
All of Sidmouth’s inpatient beds are under threat.
Graham Vincent, chairman of Sidmouth Victoria Hospital Comforts Fund, expressed hope that ‘common sense will prevail’ as the future of the unit hangs in the balance. The people of Sidmouth have contributed £5million towards a complete refurbishment of the hosptial over 25 years.
The Northern, Eastern and Western Devon Clinical Commissioning Group (CGG) put forward proposals in a bid to plug an expected £384million deficit by 2020/21 and move towards a more home-based model of care. They have been met with widespread opposition that saw hundreds of people pack into public meetings and more than 6,600 sign a petitions to save the beds.
Mr Vincent said: “We in Sidmouth are very passionate about our hospital and hope common sense will prevail. The support over many years by the community, in building, maintaining and providing much equipment has been an inspiration, not only locally, but far beyond.
“The response of local people to the consultation has been brilliant and has enabled us to put forward a very strong case to retain our inpatient beds.”
Campaigners in the town say these proposals are just the tip of the iceberg and are appealing for the public to fight for its health services in the face of further anticipated cuts.
Di Fuller, the Sid Valley’s Patient Participation Group chairman, said: “The decision is not whether they will, but which hospitals will lose their beds. If Sidmouth is fortunate to keep beds, other hospitals will lose theirs and as a result there will be more pressure on the remaining beds.
“Add to this an acute services review taking place across Devon and anyone can see that services will be under huge pressure.”
Campaigner and district councillor for Sidmouth Dr Cathy Gardner reiterated concerns and said ‘it is essential people keep protesting’. She warned ‘costs of administration have sky-rocketed and are draining money from front-line care’.
Dr Gardner is also the leader of the East Devon Alliance, which is organising a coach to a nationwide NHS rally in London on Saturday, March 4, to protest against the ‘dismantling of the NHS’. Anyone is invited to join. For details of pick-up points and how to book, see page 22.
The CCG’s governing body meeting – where the proposals are to be considered - is at 1pm on Thursday (March 2) at Exeter Racecourse and members of the public are welcome to attend.

The Express & Echo looks at the situation County-wide:


Community hospital beds closures in Devon to be decided next week

In less than a week's time, residents living in Exeter and East Devon will know whether they are losing their community hospitalbeds or not.
The plan to close 72 community hospital beds in Devon has been the subject of a 13-week public consultation. The four options proposed, which will reduce the number of community bed units in the eastern locality of NHS Northern, Eastern and Western (NEW) Devon Clinical Commissioning Group (CCG) from seven to three, are...
A) 32 beds in Tiverton, 24 beds in Seaton and 16 beds in Exmouth.
B) 32 beds in Tiverton, 24 beds in Sidmouth and 16 beds in Exmouth.
C) 32 beds in Tiverton, 24 beds in Seaton and 16 beds in Whipton.
D) 32 beds in Tiverton, 24 in Sidmouth and 16 beds in Whipton.
In the options Tiverton hospital will definitely remain open. Honiton and Okehampton have not been included in the options so will close.
Following an analysis of the consultation feedback, the final decision will be made this Thursday, March 2, at a publicly held meeting of NEW Devon CCG's governing body at Exeter Racecourse at 1pm.
When the plans were announced, Angela Pedder, lead chief executive Your Future Care (Success Regime), said: "We have a preferred option, which we have to state, but we have not got a strong preference so we are asking for views.
"Our preference is option A and the reason for that is because of travel times and accessibility for carers. It also takes into account the physical size of buildings as we have to have the physical capacity to deliver the options."
More changes are also on the way. Devon's acute hospital stroke, maternity and urgent care services are the latest to come under scrutiny as part of ongoing plans to transform the regions health care. By this summer,NEW Devon CCG and South Devon and Torbay CCG aims to have drawn up proposals for the future delivery of the three services.
Community hospital beds closures in Devon to be decided next week | Exeter Express and Echo
.
.
.
Posted by Jeremy Woodward at 13:46