"Public parks face the threat of decline - with severe consequences - unless their vital contribution to public health, community integration and climate change mitigation is recognised."

There is real concern that Britain's urban parks are under threat:
Futures Forum: Are your parks and green spaces at risk?

There are several campaigns under way - and one is simply a matter of contacting your local councillor:
Futures Forum: "Email your councillor calling on them to do all they can to protect our parks"

The Parliament's communities and local government committee has just published its findings:

The Communities and Local Government (CLG) Committee report on public parks warns that parks are at a tipping point and face a period of decline with potentially severe consequences unless their vital contribution to areas such as public health, community integration and climate change mitigation is recognised.

The Public parks report highlights considerable challenges for the sector including reduced council spending, with parks management budgets cut by up to 97 per cent, the need for parks to compete with other services for funding, and planning policy not giving them enough weight, particularly as a result of pressures to increase housing supply.
The Committee call on councils to publish strategic plans, which recognise the value of parks beyond leisure and recreation and set out how they will be managed to maximise their contribution to wider local authority agendas, such as promoting healthy lifestyles, tackling social exclusion and managing flood risk. It is hoped these plans will open up parks to support and funding beyond their usual budgets and service areas.
The Government should issue guidance to councils to work with Health and Wellbeing Boards and other relevant bodies to publish these joint plans and consider making producing such a strategy a legal requirement if the guidance proves ineffective, the report adds.

"Every local authority should have a strategic plan, recognising that parks are much more than just grass and tulips and bringing in resources from outside the traditional budgets. Parks make vital contributions to physical and mental health and bring significant community benefits. They also contribute to biodiversity and climate change mitigation and can assist in local economic growth.
Parks are treasured public assets, as the overwhelming response to our inquiry demonstrates, but they are at a tipping point, and if we are to prevent a period of decline with potentially severe consequences then action must be taken. The Government have a leadership and co-ordination role to play and volunteers do fantastic work in the sector, but the primary responsibility lies with local authorities.
We will return to this to see what progress has been made before the end of the Parliament. We call on everyone who cares about parks to be our eyes and ears on the ground, particularly those who contributed to our inquiry, and keep up the pressure on national and local government."

The Committee received a wide range of suggestions for alternative funding sources and management models and says the Parks Minister, Andrew Percy MP, the Local Government Association and local authorities should consider them. The Government should also look to remove barriers to these innovative models, such as considering a public interest test to enable local authorities to overturn restrictive covenants.
The report also raises concern about the unequal distribution of parks, with many people in deprived areas struggling to access the benefits they can provide. The Committee warns that the UK may not meet the UN Sustainable Development Goal 11.7 in respect of safe and inclusive access to parks and green spaces by 2030, and says the Government should look at how to improve provision, such as by accessing funds available under the obesity strategy.
The Committee also acknowledges that tensions can arise from competing demands among park users and says councils should encourage groups such as parkrun to contribute volunteer time for maintenance or fundraising activities.

Other findings, conclusions and recommendations include:

This is the Guardian's report on the state of our green spaces: 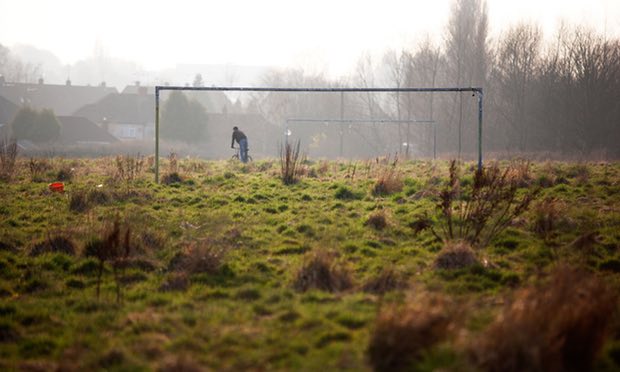 Damian Carrington
The UK’s cash-starved parks are at a tipping point of decline, MPs have warned, with severe impacts expected for park-goers’ health, community cohesion and the environment.
The nation’s 27,000 parks are highly valued by their 37 million regular users, but funding has plummeted in recent years as local authority budgets have been slashed. An inquiry by a cross-party committee of MPs found that the huge benefits that flow from green spaces are now at the point of being lost.
“Parks are treasured public assets, as the overwhelming response to our inquiry demonstrates, but they are at a tipping point, and if we are to prevent a period of decline with potentially severe consequences then action must be taken,” said Clive Betts, who chairs the communities and local government committee.

Park managers like me are a dying breed. No wonder our parks are in crisis

Anonymous
Read more
Over 92% of park budgets have been cut by local authorities, which have suffered an overall 27% budget cut in real terms since 2010-11. Some city councils, such as Newcastle’s, have cut park funds by 97%.
“Areas of parks are being downgraded and left to grow wild,” said Betts, while football pitches are being left unplayable and flower beds left unplanted. The committee’s report also found evidence of broken playground equipment going unrepaired and litter, vandalism and other crime rising.
Park managers warned in September that the neglect of parks was set to plunge them “into the disaster crisis of the 1980s and 1990s when they became no-go areas full of syringes and no park rangers.”
The report concludes that ministers and local authorities must find new ways to run parks that involve all the organisations that benefit from them, for example using funds aimed at cutting obesity to maintain parks as places to exercise.
Well maintained parks bring people a huge range of benefits, according to the evidence submitted to the inquiry, from increased fitness to better mental health and stronger community integration. “Peace, tranquility and a place where people of all backgrounds and ages mingle: [parks are] a little bit of paradise,” said Catherine Davidson, from Hammersmith, London. They are also crucial to young children; 90% of under-fives regularly play in parks.
Matthew Bradbury, chairman of the Parks Alliance, said: “It’s important the committee has recognised that parks are central to our wellbeing, but it is bittersweet to read a report which confirms what we have believed for some time, that parks are at a tipping point. They are at the heart of British life yet are a cinderella service set against competing financial demands.”The environmental benefits are strong too, with trees curbing air pollution, parkland absorbing rain and reducing flooding, and planted areas providing habitat for struggling wildlife such as bees. With climate change expected to cause more heatwaves, parks can also cool urban areas. Environmental consultant Michelle Furtado told MPs green spaces can cut local temperatures by 2-8C.
Bradbury wants ministers to go further than suggested by MPs and dedicate central government funding to parks: “If this comparatively small investment is made, it will deliver huge return in terms of improved wellbeing, social cohesion and environmental management.”
Edinburgh city council said that £1 invested in parks delivers £12 of “social, environmental and economic benefits”, while Sheffield city council found the benefits were even higher, at £34. Separate work by the University of Exeter concluded green spaces in England alone contribute £2.2bn a year to public health.
The MPs said the work of volunteers was important in maintaining parks but “it would be unfair and short-sighted to lay responsibility for resolving the challenges parks face wholly at their doors.” The increasing number of private events in parks does raise important funds, said Betts, but the public must be thoroughly consulted on events that do not provide free access.
A spokesman for the department for communities and local government said: “Parks breathe life into our towns and cities and are vital spaces for the whole community to come together to exercise, learn and play. That’s why last year we announced a £1.5m fund to deliver 87 pocket parks to benefit those living in urban areas with limited access to green space. We’re committed to keeping parks at the heart of the community, and we will respond fully to the committee’s recommendations in due course.”
More than 320,000 people signed a 38 Degrees petition asking that a legal duty was placed on local authorities to maintain parks. But the committee rejected this as “burdensome and complex”. Charlotte Woodworth, campaigns director at 38 Degrees said: “It is vital the government now takes urgent action to ensure councils around the country have the sufficient resources to protect and maintain our local parks and outdoor space. If not, we risk losing them for future generations.”
The MPs report noted that this was not a new concern, recording that in 1833 the select committee on public walks had been charged with “considering the best means of securing open spaces in the immediate vicinity of populous towns, as public walks calculated to promote the health and comfort of the inhabitants”.