Plastic is destroying our oceans:
Futures Forum: Saving the oceans from plastic pollution

The latest 'Knowledge' publication from the District Council takes us to a piece in the Telegraph:
the-knowledge-17-february-2017-issue-38.pdf


Plastic bottle 'tax' could be introduced to tackle waste 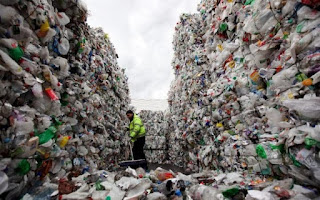 Ministers are considering plans for a plastic bottle charge as part of a crackdown on waste clogging up landfill sites and entering the sea.

Customers could be forced to pay an extra 10p or 20p for every plastic bottle or container they buy, which they would be able to reclaim if they return it as part of a deposit return scheme.

The idea has already been trialed in Scotland, which led the way with the 5p plastic bag tax alongside Wales, and ministers are understood to be evaluating the results of a number of pilots to see if similar projects could work in England. Such schemes are already popular in Europe, America and Canada.

Environment minister Therese Coffey said the Government is developing a new litter strategy which could address the issue of one-use plastic bottles which are not recycled at home.

Asked by Conservative MP Steve Double how ministers plan to cut plastic on British beaches she said: "The consultation is out there on micro-beads but there is in that a call for wider evidence about the need to tackle other plastics.

"We are developing a new litter strategy which may well address this issue.

"The Secretary of State is personally interested in this matter and intends to set up an innovation fund that may explore new ideas to tackle it."

A Government source ruled out a flat tax on plastic bottles similar to the charge for bags, but confirmed that ministers are looking closely at the Scottish scheme as part of a consultation.

It is understood that there are concerns about the amount of money it could cost to set up the deposit return system in the UK and about whether consumers would embrace the idea.

Last year Elena Sautkina, an environmental psychology expert, published research showing that since the plastic bag charge voters across the UK have grown more sympathetic to the idea of a plastic bottle scheme. Her results saw "strong support" for a plastic bottle deposit scheme grow from 33% to 39% in England, 44% to 50% in Wales and from 25% to 34% in Scotland.

But Conservative MP Will Quince warned that the idea could punish consumers who are already doing the right thing by slapping them with extra charges for drinks and other household items.

He said: "We all want to increase recycling but we have to be careful about punishing those who are already doing the right thing.

"The vast majority do already recycle and try their best, but a scheme of this nature is not a reward scheme, its actually a punishment scheme because you pay out at the beginning and you only get your money back at the end if you take your bottle back.

"Whether or not people would do that I don't know, many people would still stick it in the recycling box at home and if that's the case its just another tax."

The Scottish report into the pilots also raised concerns about the amount of money consumers stand to lose by not returning the bottles, which could run into millions of pounds.

In most cases people did not get money back and instead were given vouchers or prizes when they handed their plastic in, which has led to concerns that consumers could shun the scheme.

But Samantha Harding, litter programme director at the Campaign to Protect Rural England, welcomed the idea.

She said: “Billions of bottles and cans are thrown away every year, harming our wildlife and polluting the environment.

"After the positive effects of the plastic bag charge, the obvious next step is a bottle deposit return system. The bag charge’s success has shown emphatically that people will get behind these schemes.

“The Minister’s comments are an encouraging sign that the Government is committed to reducing bottle litter and pollution.

"Introducing a deposit return system would fit well with Government’s admirable ambition that we be the first generation to leave our environment better than we found it.”

The mandatory charge for a single use plastic bag in England, from 5 October 2015

Only retailers larger than this are required to charge for bags

The estimated number of plastic bags removed from circulation, nine months into the policy, as of June 2016. A reduction of about 80 percent

The money raised for charities and good causes through the charge, via the UK's biggest supermarkets, as of June 2016

Plastic bottle 'tax' could be introduced to tackle waste - Telegraph
.
.
.
Posted by Jeremy Woodward at 15:31