Empty shelves give food for thought...

Where's my lettuce? Clearly the dastardly Spaniards are to blame:
Spanish supermarkets hoard fruit and veg while Brit shoppers are being rationed

Bring back the spirit of the Blitz: We should grow our own:

At 7,000 square feet, the tunnels have the capacity to accommodate up to 8,000 people. Nowadays, though, they’re used to host trays upon trays of sprouting herbs

At a time when UK supermarkets haven taken to rationing vegetables as a result of a poor harvest in Southern Europe, one green-fingered duo have found a new solution to the healthy-eating problem: Grow your own greens, deep down below the City of London.

If you get off the tube at Clapham Common and then step into a cage-like lift that takes you about 100ft below the bustling streets of South London, you’ll find yourself in Growing Underground, an urban farm, housed in a network of dark and dingy tunnels originally built as air-raid shelters during World War II.

Childhood friends and founders Steven Dring and Richard Ballard had a simple idea – find a solution to the way that we, often arduously, source our food. Their business could be a step into changing how we eat. Their aim is to reconnect British consumers with local products while reducing food miles and waste.

“There’s climate change, there’s population growth, and you don’t want to keep flying stuff around the world. We need to look at our food system,” Mr Dring told The Independent. “We’ve got enough food to feed the planet, it’s just all in the wrong place. We started looking into that and how to make it into a business,” he added.

It's about knowing where our food comes from:
Futures Forum: Taking control of the food chain

It's about food security:
Futures Forum: "Little over half of our food needs will be produced here at home within 25 years."

It's about a lot more - including how we take food so much for granted:

If 2017 wasn’t already feeling apocalyptic enough, now it is game over for our greens. It seems scarcely credible that not a fortnight after January’s Great Courgette Crisis – a dearth that saw spiralizers across the land rust over and left a thousand new year’s resolutions in tatters – we find ourselves facing an iceberg crisis of Titanic proportions.

British supermarkets have started rationing lettuces and broccoli. At Tesco, customers are limited to three iceberg lettuces per person. Morrisons has imposed a two-lettuce limit, while also banning shoppers from buying more than three heads of broccoli. No more big Sunday roasts for you and your kin. Signs have gone up in supermarkets warning customers against bulk-buying these simplest of foods.

Is this the end of times? It feels a bit like it. Soon we will be eating only granola and Kettle Chips, shivering as oil pipelines are turned off one by one, our only source of light the screeds of #fakenews and POTUS tweets scrolling down our slave-built iPhone screens. 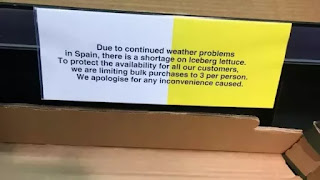 In the meantime, iceberg lettuce has become a sought-after commodity on a par with a Heston Blumenthal Christmas pudding in 2010, or cranberries, back when Delia Smith discovered them in 1995.

Icebergs are currently unavailable on Tesco’s website and in-store prices have jumped from 50p to 79p. Sainsbury’s is selling American-grown lettuces for £1.40 each, while Aldi’s US icebergs have doubled in price.

While some schoolchildren will be delighted that eating one’s greens has become a transgression rather than a duty, and supermarkets may be thrilled that iceberg – the most basic of salad bases – has suddenly become cool, the vegetable crisis is more serious than “First World problem” jokes would suggest.

The reason for the shortage is the weather. Southern Spain – known as the “bread basket” of Europe because it provides 80 per cent of the continent’s fresh produce in these winter months – has had unprecedented bad weather.

First came the heaviest rains in 30 years, which wrecked the lettuce harvest in Murcia. There followed highly unusual frost and snow, causing more crop problems – courgettes, celery, spinach, aubergines and artichokes are also affected – and export issues. Southern Europe is a climate-change hotspot and is likely to experience more extreme weather in future. This is not a one-off.

Supermarket rationing might, then, finally be the wake-up call that makes British shoppers confront where the meal on their plate has come from. Britain imports 50 per cent of its vegetables and 90 per cent of its fruit – and probably less than 10 per cent of people ever give that a second thought. For a couple of months every summer, I am adamant that I will only buy British strawberries, but I haven’t a clue where the bags of lemons and salad I buy week in, week out come from.

Food miles and shopping “local” are not new concepts, but it is far easier to remember them when pottering around the monthly pop-up farmers’ market ooh-ing and aah-ing over the odd shiny aubergine or bunch of muddy carrots than it is when doing the weekly shop at Tesco, wheeling a wonky trolley around the plastic-wrapped mountains of two-for-ones.

In supermarkets especially, eating fresh and “local” comes at a price, too; not everyone is able to pay more to get the life story of their onion and a full history of the soil it was grown in.

Not that closer necessarily means better. Boycott green beans from Kenya and you boycott the way that thousands of farmers make their living. And there is nothing to say that your locally grown beans (artificially fertilised; farmed by diesel-guzzling tractors) are more environmentally sound than the ones that have been farmed manually, fertilised with cow manure and flown over from Africa.

Nevertheless, a large number of shoppers (I’m aware that not everyone has the luxury of worrying about where their next courgette will come from) have become so used to having raspberries in February and asparagus in November that suddenly being faced with empty shelves feels like an affront.

When, in January, we decide to eat only avocado and courgetti for a month in order to lose the weight we put on indulging in meat, potatoes, booze and Quality Street in December, or when we have a go at Veganuary, just to see what it feels like, there is an expectation that the greens will just be there, waiting for us.

Supermarkets have made it that way by providing shoppers with everything they want, all of the time. It’s always summer in Sainsbury’s. Buy a bag of lettuce, eat a bit, wait for the rest to go brown, throw it away – and repeat. A few more empty shelves every so often might at least give us food for thought.

The great iceberg lettuce shortage of 2017 might teach us a lesson - The i newspaper online iNews
.
.
.
Posted by Jeremy Woodward at 11:27