Brexit: and 'What will you eat when the food runs out?'

The front page of today's Western Morning News has him saying more:

What will you eat when the food runs out? 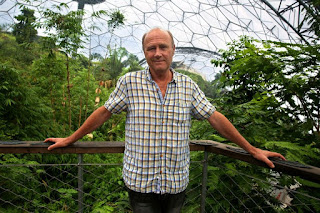 Sir Tim Smit in the tropical biome at the Eden Project
The cost of food in Britain could soar as competition for the world’s resources heats up, Eden Project co-founder Sir Tim Smit warns. And British agriculture is in no shape to step into the breach, he says.“The average age of farmers is well over 60, and there’s a blasé approach that we’ll just get food from other places. When you’re competing with other countries that need that food as well, you may suddenly find that your relationships are more difficult than you thought.“And it is my belief that the demands for food from a growing middle class in India and China is going to take a lot of the surplus food from where we’ve got cheap food and you’re going to see really significant inflation in this country as cheap food ceases to be available. If we don’t have the skills to grow it or the people that understand how to bring these things to market, we’re in a pickle.”Sir Tim and Eden executive director David Harland insist that agronomy – the science and technology of producing and using plants – has to take its place in
the ranks of professions such as accountancy and law – as it has in Holland. 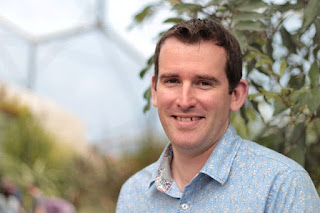 Sir Tim and Eden executive director David Harland have put themselves at the centre of the revolution. In partnership with the Eden Project, Duchy College has developed a unique set of university-level degrees taught on-site at Eden, to complement Eden’s ethos of making the world a better place.

Eden Project Learning students have the opportunity study for a university-level degree, awarded by Plymouth University, alongside experiencing hands-on practical experience. Already 63 students are in their third year on the degree course, with 110 more starting this autumn.

“We are intending to be a hugely disruptive force,” Sir Tim says. “We want to build this capacity really quickly. We are going to be training the trainers because we don’t think there are enough good teachers, and we also want to export what we do to China and elsewhere.”

To run a business well, you need to be trained in how to do it well, he says. “It’s a skill. Well I hope it is – that’s what David tells me,” he adds. “We want to turn out young people after getting their degrees to be independent, not thinking their future has to be tugging their forelock working for some lord or lady with a stately home, but that they can run businesses of their own. Which is the kind of attitude you get in Holland, but you don’t generally get here.

“I might get shot for this, but one of the really appalling things in British horticulture is people are taught brilliantly the identification of God knows how many plant varieties, but couldn’t manage a piss-up in a brewery. The management training is appalling, absolutely appalling.”

David interjects: “Which is true in many industries.”

Sir Tim, who was born in Holland, has a knighthood but that doesn’t guarantee that he identifies with the “Tweed set”.

“Britain has monster potential if we could break our hold on, if you like, the tweed mindset of the country,” he says. “In this country we have looked at agricultural land as being something which is part of the patrimony of those who own it, rather than being a national resource.

“The Dutch have always viewed agronomy in a different way. They have seen it as a profession that looks after the land, producing products that are needed by people. They could never understand why it wasn’t perceived as being a massively important business.

“In Britain the land ownership is really skewed. Land is viewed in this country as a form of banking whereas in Holland it is considered a matter of shame to own land which you do not utilise. We have a government department that is too much in thrall to the powers that be in agricultural business, and the self-interest of the NFU.

“Although there have been tremendous criticisms of the EU’s Common Agricultural Policy (CAP), the system has over the last ten years developed enough so that all the subsidies people thought were going to create the food lakes and food mountains has all gone. What the subsidies are now there for are predominantly environmental stewardship grants, to do with hedgerows, health of grasslands, the wildlife.”

His newest venture, Exporting Eden, with David Harland as chief executive, has opened his eyes to the revolution happening in China.

“The Chinese love the British and we’ve got this extraordinary opportunity,” he says. “I haven’t got that much good to say about George Osborne, except I would say that he instinctively did understand the potential of the relationship with China.

“If ever there was a presidency that suited the British temperament, it would be the current one under President Xi Jinping because he has seen as no other world leader I believe has seen that the future revolutions are over-burdened with middle-aged men’s expectations of technology and under-appreciate the huge potential of agronomy – agriculture and horticulture.

“He has shaken up the whole of the Chinese horticulture establishment by saying, ‘We have to feed ourselves. The fertility of the soils is decreasing; the poison in our land is great; and we have to transform ourselves to be an environmental powerhouse’. This would be an astonishing opportunity for Britain, if we were awake.

“We at Eden made a conscious decision to specialise in the teaching of agronomy, because the major agricultural colleges in this country have slid pretty much into obscurity, with the morale of teaching, the expectation that those teachers have for the career paths of their charges, being shamefully low.

“We decided that we were going to look at the model in Holland, where it is a profession. We were told we were going to have a failure on this course. Everybody turned their noses up at it. We’re developing the idea of teaching modules in entrepreneurial practice, understanding of media and marketing.”

David is quick to clarify: “What we’re talking about is expertise. [rather than outgrowing the Dutch, who are the world’s second biggest food exporter, after the United States]. Horticulture was not seen in the same professional way was accountants or lawyers, and we felt that was wrong.”

Sir Tim adds: “Where ever you go – China or California or Tiverton – people are concerned with how are you going to feed nine billion or more. Food security is a real issue in China. They know that they have got some problems. And they know they’ve got to sort it out.”

They also hope to persuade the Lottery to put money into buying land which people can then bid to grow on – in partnership with those who can teach them how to do the job well.

“That has received a lot of interest. There is a huge hunger among people in the cities to have the opportunity to have a bit of a rural lifestyle. They don’t want to buy a farm. But I think you’re going to see growing clubs develop.”

Sir Tim is unimpressed by the modern food industry.

“We all worship the National Health Service – except it isn’t a national health service, it’s a national illness service,” he says. “In 1953 Britain was as a whole far healthier than it has been before or since, because of rationing in the Second World War. We had to become a lot smarter about what we ate.

“In the Western world there’s a real frustration with people’s impotence to manage the food industry that is actually in many ways pumping us full of stuff that’s killing us, because it means the food has a longer shelf life.

“The future of food, you are going to see people growing optimally for the nutritional value, rather than just bulk and its homogenous look. That’s already happening in a lot of places.

“We want to create a rock ‘n’ roll edge around growing stuff that doesn’t feel Hippy dippy and alternative. The Metropolitan establishment do like the idea of growing, and they do like to find nice good-looking boys and girls who are growing vegetables in Underground stations and places like that.

“The truth is they’re all going bust. The business models don’t work. It’s a bit like Accessorize. There seems to be this thought that growing stuff, and brown bags, and bread, the business will just roll over and give you lots of money. It won’t, because they haven’t got a business model.

“The kids that are running it are not business literate. They get so wound up measuring the column inches that are written about them, as if that was money in the bank. If we lose the ability to grow things really really well, we will get ourselves in a real pickle.”

They have teamed up with academic partners at Exeter, Sheffield, Reading and – sensibly - Wageningen University in the Netherlands, the centre of Dutch expertise in agronomy.

They are also encouraging their team to go back 150 years to the idea of the journeyman – or journeyperson – gardener, working in partnership with famous gardens around the world.

“We want to have a system where you can come in as an apprentice, you can start honing your horticultural skills, and as your interests grow and you realise that you’re smarter than you thought you were, you can effortlessly change horse.