Plans for Port Royal: an alternative view: a new campaign: an online petition > The '3Rs' vision to "retain, refurbish and reuse" > handed into Town Council

The next meeting of the Reference Group for the Scoping Study at Port Royal will be in two weeks time - although the timetabling beyond that is not absolutely clear:
Futures Forum: Plans for Port Royal: anticipating a Regeneration Board >> Scoping Study consultants' report due to be presented to Reference Group > Thursday 21st September

Meanwhile, the 3Rs campaign has been collecting signatures asking for alternatives to be considered:
Futures Forum: Plans for Port Royal: an alternative view: a new campaign: an online petition > The '3Rs' vision to "retain, refurbish and reuse" > latest campaign news

The petition was handed in on Monday - when some further clarification was given on the timetable: 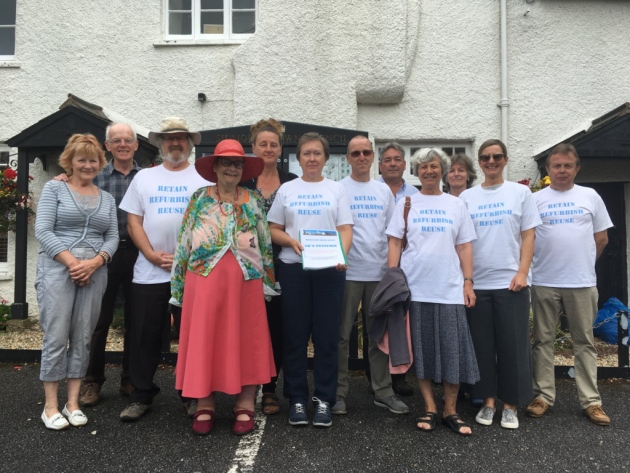 More than 1,860 people signed a petition opposing the large-scale development of Sidmouth seafront that has been handed to civic leaders


District councillors Cathy Gardner, Matt Booth, Marianne Rixson and Dawn Manley launched the ‘Three Rs’ campaign to retain, refurbish and reuse the existing buildings at Port Royal. They argue the petition, and previous studies, show the weight of public opinion is behind the area staying ‘pretty much as it is’.
But landowners Sidmouth Town Council and East Devon District Council (EDDC) insist their scoping study is only the first step and no decisions have yet been made.
Cllr Gardner said: “We are really pleased with the response to our proposal for an alternative approach to the regeneration of Port Royal and eastern town. This petition, the responses to an earlier Vision Group for Sidmouth study and the recent Neighbourhood Plan survey show that many people want the area to stay pretty much as it is.
“We call on Sidmouth Town Council to take heed of what thousands of residents are saying and to reject what could result from the site allocation in the East Devon Local Plan.”
The petition will also be handed to EDDC.
Cllr Booth said: “It’s not too late to change the course of this project – EDDC can choose to deviate from the Local Plan if they wish. Community benefit should carry a lot of weight on such a prominent site.”
The petition was presented ahead of Monday’s town council meeting but the campaigners attended to ask that it was acknowledged.
Council chairman Ian McKenzie-Edwards told them: “It’s safely in my possession. It will be considered at the appropriate time alongside other evidence at the appropriate time.”
Other evidence will include the Neighbourhood Plan, which attracted 1,863 responses from households across the Sid Valley, and the 250 responses to the scoping study consultation.
Town clerk Christopher Holland said the Port Royal Reference Group will meet on September 21 but it is not yet clear if the consultant’s report on the scoping study will be available for them to discuss. The report is unlikely to come before Sidmouth Town Council or EDDC’s cabinet before November, he said.