All sorts of promises have been made by central government when it comes to 'building more housing' - but they don't seem terribly convincing:
Futures Forum: "Public opposed to £10 billion Help to Buy expansion"
Futures Forum: "Why the new £2bn council house promise won't fix the social housing crisis"

Because, most of the new cash promised by central government seems to be going to house builders.

With the latest observation from the East Devon Watch blog on a piece in the Sunday Times:

HOW TO SOLVE THE HOUSING CRISIS – GIVE MORE MONEY TO DEVELOPERS!

Oh dear, more changes to the planning rules… no mention of stopping the Big Four developers from land banking and claiming that each and every development will not be viable, so no affordable housing…
How to solve the housing crisis – give more money to developers! | East Devon Watch 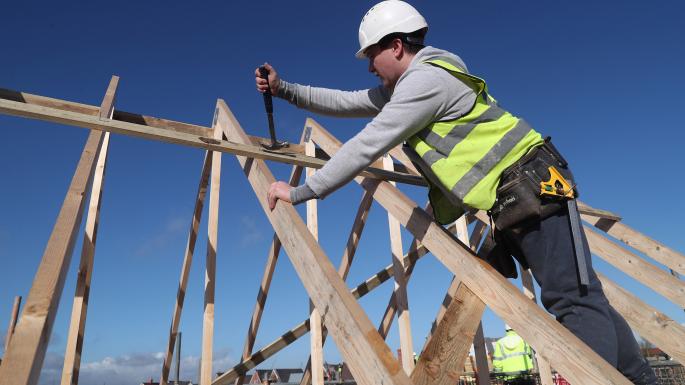 Construction companies will be boosted by the scrapping of a planned 3.9% rise in business rates REUTERS
Theresa May and Philip Hammond have agreed a deal to make housebuilding a centrepiece of the budget this month after crisis talks last week.

Theresa May and Philip Hammond have agreed a deal to make housebuilding a centrepiece of the budget this month after crisis talks last week.

The prime minister held a “trilateral summit” on Thursday night with the chancellor and Sajid Javid, the communities secretary, in an attempt to cut through cabinet divisions over housing, and agreed there would be new money, reforms to planning and incentives for the construction industry to build homes.

The Sunday Times can also reveal that Hammond will give a boost to companies by scrapping a planned 3.9% rise in business rates, set to cost firms £1.1bn next April. Instead of increasing rates by the retail prices index measure of inflation, the chancellor is preparing for an increase in line with consumer prices, which stands at 3%.

Hammond has ditched plans to offer lower tax rates for young people, after internal Tory polling showed that the idea was not hugely popular with the young and was strongly opposed by older voters.

Sources in the Treasury and Downing Street say the chancellor and prime minister are committed to finding a package of measures on housing which will include more cash, alterations to planning rules and other “supply side” changes to increase Britain’s brick-making capacity and train bricklayers and electricians.

May is still understood to be resisting plans to build on the green belt, which have widespread support from other cabinet ministers. The prime minister’s Maidenhead constituency borders the green belt.

Hammond is reluctant to agree huge new sums and has rejected calls for £50bn of borrowing, but has concluded he will have to find some money.

A senior figure said: “The general election sent some political warning signals, which need to be responded to. We are going to tackle intergenerational unfairness and the obvious dysfunctionality in the housing market.”

The plans have the strong support of Gavin Barwell, the former housing minister who is May’s new chief of staff.

Hammond has privately argued that the construction industry is stretched to the limit and wants to uncork the problems. “We import 100m bricks,” said a source.

“There are not thousands of unemployed bricklayers sitting around waiting to build. We need supply-side reforms as well as money.”

Hammond and May are understood to recognise that they have to signal to voters under 40 that they are on their side, having failed to do so during the general election and the party conference last month.

Any tax rises are likely to be confined to asset-rich older voters and those with pensions. “Raising tax is always difficult, but it depends who you are taxing,” said a senior source.

He is also drawing up a package of measures to train young people for the hi-tech jobs of the future and plough money into research and development in sectors such as artificial intelligence and robotics.

The chancellor will also outline plans to improve productivity, which he regards as the most important factor in boosting growth in the years ahead.”

The problem is that there have been many other such 'initiatives' before:
Sajid Javid and Philip Hammond: Let’s get Britain building - GOV.UK

But it will need smaller building firms to do the job - as suggested by Conservative Home last month:

We all know that the remarkable increase in jobs has been driven to a large degree by small- and medium-sized employers, many of which have put on small numbers of staff each, producing a large effect nationally. The construction issue is the reverse. With more small building firms, there’d be more capacity to take up the opportunity to build out smaller planning permissions, more impetus to build on approved sites which aren’t simply the easiest or most profitable, and more new homes being started simultaneously, rather than sequentially.
Behind the shortage of new homes is a shortage of construction companies | Conservative Home
.
.
.
Posted by Jeremy Woodward at 15:35