Brexit: and the wine trade

Whilst food and drink prices will be going up with the fall of the pound:
Futures Forum: Brexit: and food prices

... and that includes wine: 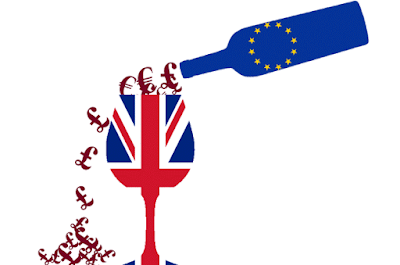 ... some commentators feel it can only be good for local business:

Hush Heath Estate co-owner Richard Balfour-Lynn said the weakening of the pound since the EU referendum vote "has helped our non-European trade tremendously". He added: "For an industry still in its infancy, the Government now has the flexibility to help English producers by cutting duties on our wine so that we no longer pay the same as European competitors to sell in our own market."
But he warned that the growing market for "British wine", industrially fermented from imported grape must, could muddy the waters for English wine in export markets. "Our customers in Japan or America don't know the difference when buying a bottle, but there are obviously substantial differences in quality and taste," he said. "Should they have a bad experience, it could put them off English wine."
Freed from EU obligations, the Government could address this by revoking the "British" designation from such products, he added. "We're gaining an international reputation, but that foothold is fragile and at risk of being undermined."
Currently around 250,000 bottles of "true" English wine are exported annually, mainly to the USA and Japan, according to trade body English Wine Producers. The industry has set a target of increasing that tenfold by 2020.
Meanwhile, the Co-op is to begin stocking its first English wines at selected stores, including Hush Heath's Balfour 1503 Foxwood sparkling wine. It will also stock an own-label English still white wine in around 1,000 outlets, priced £7.99. Made by England's largest wine producer Denbies of Surrey from the Bacchus and Ortega varieties, Limestone Rise will be the first wine in the Co-op's new premium Irresistible range.
Co-op category trading manager Simon Cairns explained: "In the past the scale and volume required for all stores was a challenge, but now we are looking at our estate by cluster. Going into partnership with Denbies helped us to achieve the right volume.
"With English wines we have been really looking at what is good value for money. I have tried a lot of English wine and I asked myself whether it really offered that, but occasionally it does."