We Back Beauty in local planning

Another would be to actually talk about 'beauty':

The Rt Hon John Hayes CBE MP discusses good design in transport at an event hosted by ResPublica, the Woodland Trust and the National Trust.

Truth is an absolute. And beauty the means by which it is revealed to us in its most comprehensible form. In John Keats’ words: Beauty is truth, truth beauty — that is all / Ye know on earth, and all ye need to know.

Through our connection with beauty, we enjoy a taste of the sublime and both an escape from and a compensation for the inevitable pains and trials of daily life. Through beauty the common good is nurtured, for humans are spiritual creatures who need much more than their daily bread.

Our sense of place is inseparable from our sense of worth and so the places in which we live and the environment around us feeds our individual and communal well-being.

To believe that a government minister shouldn’t dare to speak of beauty is to assume that beauty is beyond politics or perhaps that politics is beneath aesthetics. It is a misconception I want to confront this evening.

Politicians, as their confidence has been eroded, have retreated to, where a less challenging, less ambitious, less thoughtful discourse prevails.

Nervous about broaching matters about which they feel they can’t do much or don’t want to do much, it is unsurprising that they have failed to inspire those whose everyday lives have been blighted by the ugliness of the built environment they endure.

Back in 2005, my colleague Oliver Letwin observed that:

The loss Oliver described is one I have regularly encountered, both in my role as Transport Minister and in the other offices of state I have held.

Even the most obvious truth — the advocacy of the pursuit of beauty — is regarded with either disregard or distain. In part, this is explained by egalitarian hostility to those who judge the taste of others — for we are encouraged to believe that all is of equal worth regardless of how brutal, ugly or crass it is.

We are moving toward a dictatorship of relativism which does not recognise anything as definitive and has as its highest value one’s own ego and one’s own desires.

Yet this does not have to be so. Through beauty, our ideals and what is real can be harmonised. Those who dare to make a case for beauty, elegance, grace or refinement are far from a public discourse brutalised by modern media and the consequent zeitgeist.

We are forced to live in too many spheres which have been colonised, in Umberto Eco’s terms, by the Empire of Imbeciles. The crass preoccupation with utility becomes imbecilic as it descends to the defence of ugliness.

No one has done more nor suffered more for his advocacy of beauty than His Royal Highness The Prince of Wales. As long ago as 1989, he set out in ‘A Vision of Britain’ the defining principles of good architectural design. In 2011, he explained again that these timeless principles fit the future:

We can’t have a future without the past. There has to be a sense of timelessness, a living tradition that helps to maintain (that) sense of identity and belonging.

More recently, in December 2014, he once again made the case for the re-connection of design with the natural order. He argues:

Universal principles are expressed in the order of Nature, which can never be ‘old-fashioned’… Basing designs on the timeless universal principles expressed by Nature’s order enables the full scope of our humanity to be fulfilled, on the physical, communal, cultural and spiritual levels.

Perhaps the most easily grasped and so persuasive counter to the zealous preachers of modernism is the relationship — understood for centuries but now neglected — between the simple, God-given beauty of nature and what man can do. The essence of Prince Charles’ case is that there are timeless principles of good design. Such an argument would for centuries have been regarded as a priori.

Now the wish for art to please – to inspire – has been replaced by a thirst to shock, to alarm. As Roger Scruton has said:

Without the background of a remembered faith modernism loses its conviction: it becomes routinised. For a long time now it has been assumed that … Art must give offence, stepping out of the future fully armed against the bourgeois taste for kitsch and cliché. But the result of this is that offence becomes a cliché.
Yet, despite popular revulsion with much they have imposed upon us, those responsible — who rarely live where they have wrought havoc — viciously attack anyone who dares to articulate what most people know: that most of what’s been built in my lifetime could be demolished without aesthetic cost, and so bring the seductive benefit of leaving what was there before to stand proud.

The legal news site Out-law would agree:
Sustainable design should be at the heart of the planning system, says expert - Out-law

A new campaign has been launched: 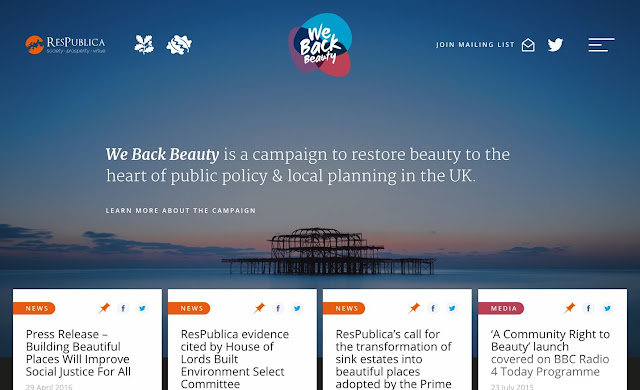 ResPublica launches We Back Beauty campaign

Give communities more control over their surroundings, says commission

ResPublica launches We Back Beauty campaign

The Backing Beauty Commission has launched a campaign ‘We Back Beauty’ to give local communities greater power to decide how their neighbourhood should look in order to create more democratic access to beauty – and its health and community benefits.

A report, published last summer, ‘A Community Right to Beauty’, by independent think tank ResPublica, showed that households with incomes above £45,000 a year were more likely to have access to beautiful surroundings and that this had an impact on health and wellbeing.

ResPublica also concluded that the current planning system and poorly resourced local planning departments exclude communities from discussion over the future of their neighbourhood. Instead it identified a system of ‘planning by appeal’ whereby objecting to a development was the only input available.

The Backing Beauty Commission proposes devolving more power to local authorities and building on the Neighbourhood Plan scheme to allow local communities to be more involved in the details of new developments. It also proposed financial incentives for developers to include beauty in their schemes, and the creation of listed ‘local beauty assets’.

The commission comprises organisations including the National Trust, Woodland Trust, English Heritage, and the CPRE as well as MPs and Tom Bloxham of developer Urban Splash.

Duncan Sim, senior policy and projects officer at ResPublica, said: ‘Landscape architects have an intimate role to play if our idea of what the planning system could look like – with neighbourhoods proactively feeding into and shaping the vision for their area’s future, guided by experts – is to become a reality.

‘We would encourage members to place the highest emphasis on seeking the views of local people and incorporating these into their designs and plans wherever possible, on account of the benefits our research and other studies demonstrate can be realised when people feel satisfied and comfortable with the look and feel of their area.’