Building a new HQ isn't necessarily the best 'strategic decision', as excerpts from this piece from this blog three years ago suggested:

Elsewhere in the District, there are other buildings with cost issues:RELOCATION… BALANCING THE BOOKS

It seems VERY fashionable these days to move HQ after a few years – wonder how long Honiton and Exmouth would be declared not fit for purpose?Civic centre exit is ‘on schedule’ - News - North Devon GazetteNorth Devon District Council on the move too | East Devon Alliance
More alarmingly, the cost to build something is not always the same as the price you get when you want to sell it...
A correspondent asks:

Question: Having received such a poor offer for the business centre from Asda, what re-sale price do they expect for a £10m white elephant house in a low value location after the abolition of EDDC? (£1m, 2m!?)

At least West Dorset have centralised their services in the middle of Dorchester not on remote industrial estate near Honiton.
See: Futures Forum: Knowle relocation project: comparing the Sidmouth and Honiton/Exmouth optionsEDDC’s relocation project….let’s take a close look | East Devon Alliance
There are other examples elsewhere of investing in assets of diminishing value:
New Rochdale Council HQ is worth half what it cost to build

Futures Forum: Knowle relocation project: the cost of council buildings: before and after

Meanwhile, back to what's happening now, all around the country, councils are selling off their HQs - simply because they haven't got the money:

Hammered by cuts, local authorities are being forced to flog or rent out their headquarters to continue to provide essential services. It’s a fitting metaphor for the hollowing out of municipal power


While Newcastle’s options were limited by the Civic Centre’s listed status, “some local authorities have turned around and what they’re doing is moving from a town hall or civic hub into a newer building elsewhere”, says Cllr Ged Bell. “Some are planning on demolition of the current town halls.” And you don’t have to go far to find them.

There are many precedents for a local authority selling off its home in this way. In 2015, Plymouth flogged its own Civic Centre to developers Urban Splash for the nominal fee of £1. It was Grade II-listed, which thwarted the council’s preferred option of demolition. It’s yet to be refurbished. Swansea’s council initially put its own sea-front Civic Centre up for sale in 2015, but continues to occupy it, and recently confirmed plans to rent the third floor to Swansea University. Northumberland county council’s proposal to demolish its headquarters at Morpeth, replacing the buildings with a retail park, school and housing development, reached an advanced stage before being shelved earlier this year. Durham has also demolished civic centres at Chester-le-Street and Consett.

Elsewhere in the country, another council is struggling:

A cash-strapped local authority has imposed emergency spending controls as it faces "severe financial challenges". Last month the government said an inspector would look into allegations of financial failings at the authority. 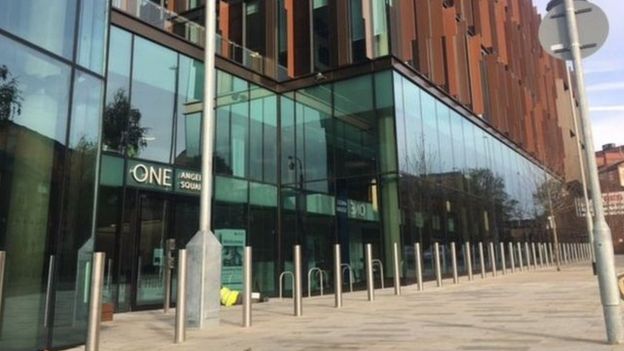 The Conservative-led council announced in December that it was looking to increase council tax by almost 5% as it sought to make savings of £34.3m. At the time, council leaders claimed they were facing huge demand for services, as well as cuts in government grants.

And this has led to the idea of scrapping its nice new HQ: 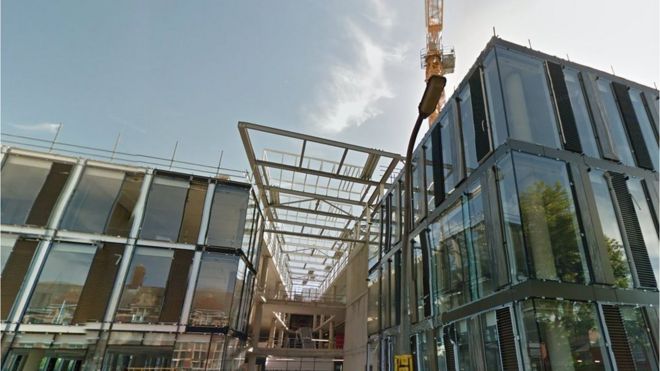 A cash-strapped local authority is considering selling its new £53m headquarters, which officially opened in October.

Northamptonshire County Council's plan would then see the building leased back, the BBC has learned.

One Angel Square was designed to save money by closing 12 offices and making best use of a new office block.

The BBC has learned the council is looking at a number of options to bring in money short-term one of which is to sell the building.