How far is it possible to go shopping and not come home with some plastic?

Others are making some efforts:
Asda bans single-use bags in blitz aimed at cutting 10 per cent of plastics from products in next year | The Independent
Morrisons to drop single-use plastic bags within months - Business Green

There is plenty of handy advice on how to avoid shopping with plastic:
Going plastic-free? Easy eco-friendly kitchen swaps - Telegraph
Break the plastic habit by purging it from your shopping | Daily Mail Online

But, as ever, Totnes is showing the way:

In the past few weeks Richard Eckersley has noticed a change in the type of people who come into his shop.
The former Manchester United footballer, who turned his back on the game to set up the the UK’s first “zero waste” store on Totnes high street in Devon, says it is no longer only committed environmentalists who pop in, looking for a cleaner way to shop.
“We thought January might be a bit quieter but it has been crazy,” says Eckersley, who set up the Earth.Food.Love shop with his wife Nicola in March. “A lot of new people are coming in – people who have not necessarily been involved in green issues before ... it really feels like this [concern about plastic waste] is starting to break out of the environmental bubble.” 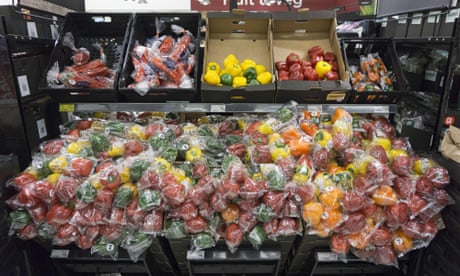 Read more
Last week Theresa May put cutting plastic pollution at the heart of the government’s 25-year environmental plan, and although critics said it was short on detail she did call for supermarkets to introduce plastic-free aisles to offer customers more choice.
But Eckersley says many consumers are already way ahead of politicians. He and his wife have helped people who are planning to set up similar stores in Wales, Birmingham and Bristol.
“We are getting calls every week from around the country from people wanting to set up something similar in their towns ... it feels like this has really tapped into something that is growing all the time.”
More than 200 miles away, Ingrid Caldironi shares the enthusiasm. She set up the plastic-free Bulk Market in east London last year. It has proven so popular that it is now moving to bigger, permanent premises at the end of the month.
“We have had an amazing response, especially in the last couple of months,” she says.

Eckersley and Caldironi are at the vanguard of a burgeoning anti-plastics movement in the UK that has been fuelled by newspaper investigations including the Guardian’s Bottling It series, the Blue Planet television series and a general alarm at the damage plastic is doing to the natural environment.
But their enthusiasm is not shared by big supermarkets, which have thus far shown little inclination to reduce their plastic waste.
“For a nation of shopkeepers we are lagging behind in this race,” says Sian Sutherland, founder of the campaign A Plastic Planet which led the calls for plastic-free aisles.
“The most exciting thing is that politicians and industry are no longer claiming that we can recycle our way out of the plastic problem,” she added. “Banning the use of indestructible plastic packaging for food and drink products is the only answer.”
Wandering the aisles of the supermarket where everything from pizza to fresh fruit and veg is covered in plastic, Sutherland says urgent action - rather than warm words - is needed.

“Once you start to see it, to notice it, it is really quite overwhelming,” she says.
Her co-founder Frederikke Magnussen explains the origins of their campaign. “It started with two unreasonable women who wanted choice – and supermarkets are supposed to be all about choice, right?
“I can buy gluten-free, fat-free, African food, Asian food, yet if I want to buy plastic-free it is impossible for me to do so … In this land of multiple choice the one thing I can’t do is buy things without plastic.”
In the past year there has been a growing awareness of the scale of plastic pollution around the world which is causing widespread damage to oceans, habitats and food chains. Last year a Guardian investigation revealed more than 1m plastic bottles are bought around the world every minute, with most ending up in landfill or the sea. And later in the summer it emerged that the contamination is so extensive that tap water around the world also contains plastic. 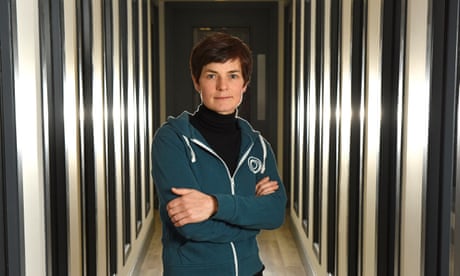 'It's shocking, it's horrendous': Ellen MacArthur's fight against plastic

Read more
The UK environment secretary, Michael Gove, has also admitted that he had been “haunted” by images of the damage being done from David Attenborough’s Blue Planet II TV series
Back in Devon, as politicians wake up to the scale of the problem, Eckersley says he hopes people are now becoming aware of the benefits of a more sustainable way of life.
And the former premiership footballer says he has no regrets about turning his back on the big money to live “at a much slower pace, enjoying the simpler things in life with my family”.
“After Willow, my daughter, was born, it made me think about what future lies ahead for her. I wanted to say that I at least tried, I wanted to make a difference.”

The plastic-free stores showing the big brands how to do it | World news | The Guardian
.
.
.
Posted by Jeremy Woodward at 10:58