Plans for Port Royal: "a missed opportunity ... It requires an ambitious approach."

The Town Council met earlier this evening - when disappointment at the lack of 'blue-skies thinking' from the consultants was widely expressed by many councillors:
Futures Forum: Plans for Port Royal: anticipating a Regeneration Board >> Scoping Study consultants' "final report" to be presented to Town Council > Monday 5th February

Meanwhile, our local MP has been referring to bigger ideas for the area - which have been mooted before:
Futures Forum: Plans for Port Royal and the Eastern Town >>> >>> >>> >>> "a wrap-around car park, weaved between starter flats"
Futures Forum: Plans for Port Royal: anticipating a Regeneration Board >>> 'a clever design that incorporates multi-storey parking and residential homes with affordable housing' 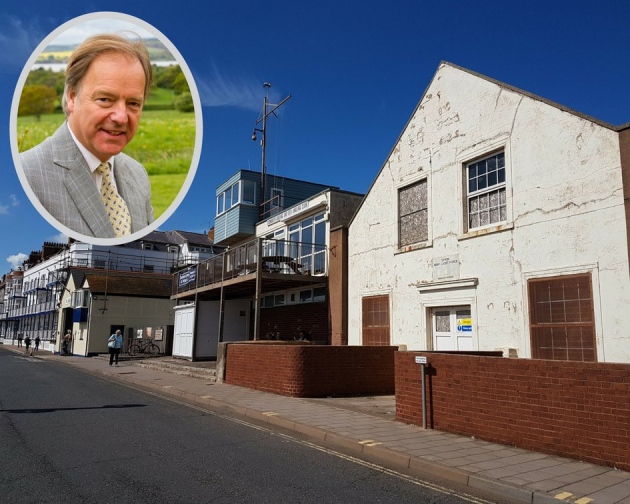 Limiting the regeneration of Port Royal to a potential new use for the Drill Hall would be a missed opportunity, according to East Devon’s MP.

Sir Hugo Swire told the Herald the vision for the area ‘lacks ambition’ and suggested bringing in the Prince of Wales’ design team to create a master plan.
Doing so would take politics out of the equation and could create a development that has the backing of the community, he said.
“As an MP, I’m not involved in planning, but this MP cares passionately about the seafront in Sidmouth and its built community,” said Sir Hugo.
“My view of the Ham is that we could do multi-storey car parking there. It could be wrapped in retail or starter flats. There’s terrible parking pressure there already. You could have more people living in that part of the town.
“I think it would be a missed opportunity to just do something with the Drill Hall and not the rest of it. It requires an ambitious approach.
“It’s getting tied up in local politics. I would take politics out of it.”
East Devon District Council (EDDC) and Sidmouth Town Council conducted a £10,000 scoping study to consider options for the redevelopment of Port Royal.
Consultants Heynes Planning Ltd and Groupwest said the site’s renewal was a ‘once in a lifetime’ opportunity and suggested drawing up a master plan.
But the report revealed a number of ‘unresolved uncertainties’ and the recommendations from council officers centred on marketing the Drill Hall so it can be reopened, potentially as a restaurant or bar. The councils will vote on the recommendations this week - Sidmouth Town Council this evening (Friday) and EDDC’s cabinet on Wednesday.
Sir Hugo said: “Saying it’s too difficult I think is unambitious. I think it needs a respectable organisation like the Prince’s Foundation to bring in its expertise and come up with a masterplan.
“I’m frustrated – I’ve been speaking to the councils about it for a few years.
“They [the Prince’s Foundation] would take the community with them. I’ve had several meetings with them but they have to be asked to do it by the council.”
Prince Charles’ vision for the foundation was ‘to champion and to show what it means to build harmoniously and in an environmentally friendly manner’.

The East Devon Watch blog is not impressed:
Sidmouth: Swire fancies flats and car parking at Port Royal – or getting Prince Charles in! | East Devon Watch
.
.
.
Posted by Jeremy Woodward at 15:21