Brexit: and the future of energy projects

There are very different messages coming out as to what the energy sector will look like post-Brexit:

Siemens boss: My confidence in Britain's future after Brexit

Joe Kaeser, chief executive of the German industrial giant, sees big opportunities and thinks the PM is listening to concerns.

... It recently invested more than £300m into a renewable energy project in Hull, and Kaeser told me he still sees the UK as one of the "two most powerful economic environments in Europe", along with Germany.

"There was no specific area," said Mr Kaeser. "We talked about economic conditions, about skills and renewable energy. We wanted to understand the policy about renewables going forward. As a great employer, one of things we prize is political consistency and clear policy."

I understand he found consensus on issues such as skills training and education in the energy sector.


Siemens boss: My confidence in Britain's future after Brexit

The study reveals that though more than 1,200 energy leaders across 95 countries consider investment in renewable projects as their top priority this year, Britain’s decision to leave the EU has made the country's clean energy sector unpredictable.

Other major findings highlight that skill and efficiency in the energy sector has become a concern as workforce is ageing and not being adequately replaced. 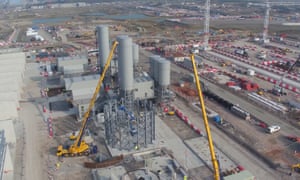 There are concerns that Brexit will make it harder to import skilled EU nationals to build Hinkley, which is slated to provide 7% of UK electricity. Photograph: EDF Energy

Vital energy projects including the £18bn Hinkley Point C nuclear power plant and interconnectors used to import cheap electricity from Europe are under threat due to Brexit, energy experts have warned. They said the projects, which are key to efforts to keep the UK’s lights on, could be at risk if the energy sector is denied entry to Europe’s internal energy market.

That looks increasingly likely, after the European parliament passed a resolution on Wednesday opposing “piecemeal or sectoral provisions” for individual UK industries.

Speaking at an event organised by the Energy and Climate Intelligence Unit, experts said plans by French power firm EDF to build two new reactors at Hinkley Point C could be affected.

See also:
Futures Forum: The future of Hinkley: Is the UK government about to invest 'direct public subsidies'? And is China about to 'pull out of the UK, creating an even bigger tax burden'?
Futures Forum: The Great Infrastructure Myth
.
.
.
Posted by Jeremy Woodward at 08:21