In her interview with Rob Hopkins, Molly Scott-Cato referred to her book on 'the Bioregional Economy':
Futures Forum: Localism and 'East Devon First' 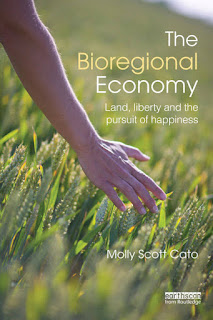 A strong local economy is important to sustainability, but how large is a local economy, how self-reliant can it be, and what resources will still need to be imported?

A bioregional economy explores these questions while challenging the values of the current global economic system, putting people and locality before profit and growth.
Join Cambridge Carbon Footprint and leading Green Economist Molly Scott Cato as she sets out a visionary account of what a bioregional approach to the economy would mean — and how to get there from here.

It's connected to the idea of 'bioregionalism':


The bioregionalist perspective opposes a homogeneous economy and consumer culture with its lack of stewardship towards the environment. This perspective seeks to:

Here is an academic piece from a couple of years ago:
From Resilient Regions to Bioregions: An Exploration of GreenPost-Keynesianism
A bioregional economy: A green and post-capitalist alternative to an economy of accumulation - Mar 05, 2014

Because, we have to ask ourselves to what extent we have come to rely on goods and resources which are a very long, long way away:
Futures Forum: Empty shelves give food for thought...
Futures Forum: Brexit: and free trade in lettuce
Futures Forum: Taking control of the food chain
Futures Forum: The failure of the UK food system

The Professor of Strategy and Sustainability at the University of Roehampton, a green economist, offers a model for achieving the 90% reductions in carbon emissions needed to avoid dangerous climate change and proposes a system of self-reliant local economies organised around ‘bioregions’.

In her book, The Bioregional Economy, Professor Scott Cato sets out a visionary account of what a bioregional approach to the economy would mean — and how to get there.

Green economists suggest a need to replace the globalised economy, and its extended supply chains, with a more ‘local’ economy. But what does this mean in more concrete terms?
> How large is a local economy,
> how self-reliant can it be,
> and what resources will still need to be imported?

The global economy is currently driven by growth, and the consumption ethic that matches this is one of expansion in range and quantity. Goods are defined as scarce, and access to them is a process based on competition.

A bioregional approach to economics assumes a different system of values to that which dominates neoclassical economics and works towards a global economy composed of largely self-sufficient local economies.

It proposes a shift in the focus of the economy away from profits and towards provisioning, seeking a new ethic of consumption to replace the failed economic goals of expansion and profit, prioritising locality, accountability and conviviality.

The Bioregional Economy – Localise WM
.
.
.
Posted by Jeremy Woodward at 08:30