Extreme sports and the environment

The top story on-line at the Herald is the damage off-road vehicles can do to vulnerable habitats: 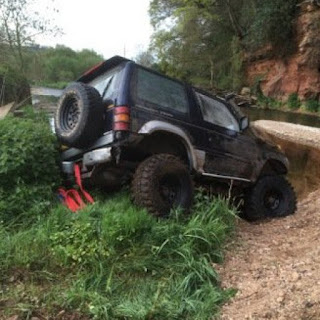 Police provided this photo of a 4X4 on Clinton Devon Estates' land in Dotton as an example of the issue.

Police Sergeant Andy Squires said offenders are taking their four-wheel-drives over historic Devon banks and farm crops - and even up the River Otter. If caught, those responsible could be summonsed to court or served a Police Reform Act notice, which could see their vehicles seized and crushed if they are used in an antisocial manner a second time.

Sgt Squires said: “They have trashed the Devon banks and verges around White Cross car park [on Fire Beacon Hill] and East Hill, and more recently have been driving up the River Otter. This last weekend, damage was caused to the river bank, the farmer’s crops adjacent, not to mention the environmental damage to the river. They do not have the landowner’s permission. It is an offence to drive a vehicle elsewhere than on a road and we will be looking to prosecute anyone caught doing so.

“Green laning is an entirely different matter, usually undertaken by responsible enthusiasts on lanes and tracks where vehicles are permitted.”

Green lanes – shown as white lines on an Ordnance Survey map – are permitted for vehicle use as they are technically highways, but that also means normal laws, standards of driving and vehicle documentation apply.

Sgt Squires added: “Driving up a Devon bank, through a hedge or down a river is unacceptable and will be taken seriously. It is selfish and unfair on those that enjoy our beautiful countryside.”

He said witnesses to 4x4s being driven off-road should call 101 unless someone’s life is in danger, when they should call 999.

Stephen Hussey, of the Devon Wildlife Trust, said: “Using a vehicle in this fashion is reckless and shows a lack of care for local people and the countryside. Beyond the damage to farmers’ land and livestock, this kind of irresponsible behaviour will also harm nature.

“The River Otter is home to some special wildlife. It has good numbers of otters, kingfishers and, of course, is the place where we now have a breeding population of beavers – the first time that these animals have been seen in the English countryside for 300 - 400 years. It would be a shame if the welfare of this special wildlife is put at risk by a few thoughtless people.”

Estate surveyor Clare James confirmed that there had been several incidents involving 4x4s being driven onto Clinton Devon Estates land near Dotton and information had been passed to police and the Environment Agency.

But bikers are not necessarily about trashing habitats, as with this piece from Totnes last year:

‘Lost lane’ reopens thanks to bikers

Bikers have put their muscle and money behind a mini bridge building operation to reopen the ‘lost lane’ of Harbertonford. The 1km long Ashwell Lane, near Rolster Bridge, is part of the area’s network of green lanes. It was closed as a through route one year ago after a bridge became too dangerous to use. But now it is back in use after members of the Devon Trail Riders Fellowship teamed up with the county council to repair it.

This week the county council admitted that if the bikers’s group had not helped, the lane would have had to remain closed. Ten tonnes of sand and cement were used to rebuild the bridge with some of the materials funded by the Train Riders Fellowship – which also provided some of the skilled labour in the shape of three stonemasons who are members of the motorcycle fellowship.

As with the hunting fraternity, there is an interesting relationship between 'extreme sports' and 'the environment'.


Extreme Sports as a Precursor to Environmental Sustainability

Extreme sports have unfortunately gained a reputation for being risk focused and adrenaline fuelled. This perspective has obscured the place of the natural world, making extreme athletes appear to seek to conquer, compete against or defeat natural forces. In contrast, this paper explores findings from a larger ... study that suggests extreme sports can initiate a positive change in participants’ relationships with the natural world.

Extreme Sports as a Precursor to Environmental Sustainability: Journal of Sport & Tourism: Vol 14, No 2-3

Although there are differences between using a vehicle and not - as pointed out by the same author as above, this time on a north Devon website:

Adrenaline zen: what we can learn from extreme sports

BASE jumping, wingsuit flying, big wave surfing, extreme skiing and solo rope-free climbing, when we think of someone who takes part in these extreme activities, we think of a risk-taker. The type of person you might describe as a “deviant hedonist” or a “sensation-seeker”, who is looking for an “adrenaline rush”. And they are most likely to be young and male.

The problem with this stereotype of extreme sport participants, is that not only does it not always ring true, but it also means that extreme sports then become viewed in a way that makes them inaccessible to “normal people”.

This view can be extremely damaging, especially given evidence – which emerged when I was researching a book on the subject – shows that extreme sports might actually be more accessible and have more of a positive impact than traditional, competitive sports.

Interviews I conducted with people between the ages of 30 and 70 who participate in extreme sports suggested they can help to create profound and positive life changes – both in the short term and longer term. So instead of just the fast-paced experiences often portrayed in short videos of extreme sports, in reality, participants describe a feeling of peace and tranquillity during the experience that reflects something similar to mindfulness.

Over the long term, these experiences support sustained well-being benefits including the realisation that emotions, such as fear, that are traditionally considered negative, do not have to constrain one’s potential.

Adrenaline zen: what we can learn from extreme sports |

You could of course just get on your (non-motorized) bike:
Dartmoor's spring makeover | Environment | The Guardian
Tamar trails: get on your bike this summer | West Country - ITV News
In Devon heaven: cycling the Exe Estuary trail | Travel | The Guardian
.
.
.
Posted by Jeremy Woodward at 08:44