We need to be using less plastic:
Futures Forum: Plastic bags: You can't throw something away, because there is no 'away'

However, it's causing huge problems at sea:
Futures Forum: Saving the oceans from plastic pollution >>> Bring in a deposit scheme on plastic bottles


EDIBLE WATER: HOW EATING LITTLE BALLS OF H2O COULD BE THE ANSWER TO THE WORLD'S PLASTIC POLLUTION

Plastic water bottles are one of the worst culprits for the 16 million plastic bottles that are dumped in the UK each year. Julia Platt Leonard meets the innovators who have ditched the plastic and want us to eat water instead
I’ve slurped water. I’ve guzzled it. I’ve sipped it. But I’ve never eaten it. That changed when I tried my first Ooho. Ooho – or edible water – is the brainchild of Pierre Paslier and Rodrigo Garcia Gonzalez, who wanted to create an alternative to plastic bottles, the ones many of us buy everyday and toss away. Their ingenious solution is an edible, seaweed-based membrane that holds water.
Quirky? Yes, but also very smart. Their company Skipping Rocks Lab just launched a funding initiative through Crowdcube and raised £850,000 in only 72 hours, smashing their initial target of £400,000.
The two met while studying for a masters in innovation design engineering, a programme offered jointly by Imperial College and the Royal College of Art in London. 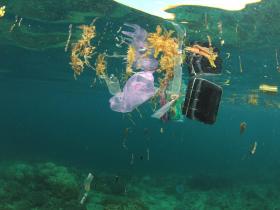 How not recycling plastic is damaging our oceans

They set themselves the Herculean task of finding an alternative to plastic, using natural materials. “The problem is that a plastic cap or plastic bottle will take 700 years to decompose, so there is a complete mismatch between how long they are going to be used and how long the environment is going to take to decompose them,” Paslier says. “Our goal is to match the actual time it’s going to take to consume, with the right packaging.” 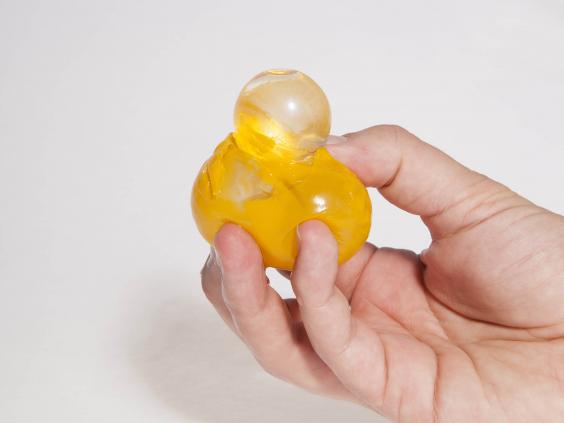 A group of three to 10 Oohos can be encapsulated in a peelable skin, just like an orange. The material is transparent but can be coloured to differentiate the peel from the core (Skipping Rocks Lab)
They found inspiration in an unusual place. “The starting point for the exploration was to look at fake caviar – fish balls that are actually made of alginate which is an extract from brown seaweed,” he says. Seaweed, it turned out, ticked a lot of boxes. It’s readily available around the world so in the future their edible water can be produced locally rather than being shipped long distances, dramatically reducing the carbon footprint. Seaweed is also fast growing. “It’s something that is so renewable that it makes you wonder why we are using precious materials when nature provides materials that are so renewable.” 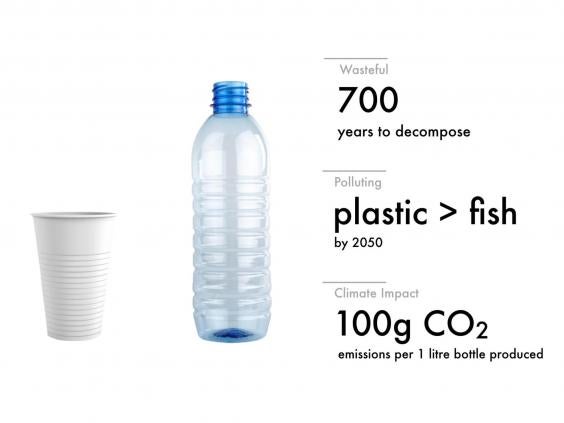 Paslier and Gonzalez wanted to find an alternative to the plastic bottles which many of us buy and throw away daily, which take hundreds of years to decompose (Skipping Rocks Lab)
The group Recycle Now estimates that the average UK household uses around 480 plastic bottles a year but only recycles around 270, so nearly half are never recycled. That translates into nearly 16 million bottles dumped every year across the country, winding up in landfills or the ocean. Of course, not all of those are water bottles but they are a big culprit. The problem is compounded, Paslier says, since it takes a lot of natural resources to make plastic bottles in the first place, making them costly in more ways than one.
On paper, the two perhaps weren’t the most likely candidates to tackle the huge issue of plastic bottles. “His background is architecture,” says Paslier, “and mine is in mechanical engineering, so we weren’t really supposed to be the ones to bring this sort of innovation to the world.”
Currently the two are focussing specifically on a replacement for the small, single-serve bottles you buy when you’re on the go. Paslier says this accounts for about 30 per cent of the bottled water market in the UK. They’re developing the technology so edible water can be made on the spot so you could walk into a place such as Pret A Manger, Leon or Starbucks, pick up something to eat and grab an Ooho too. “We’re actually talking to some of these chains to provide the technology so they can produce Ooho and sell them as they would fruit. And that’s really where we see a lot of potential in the next few years.” 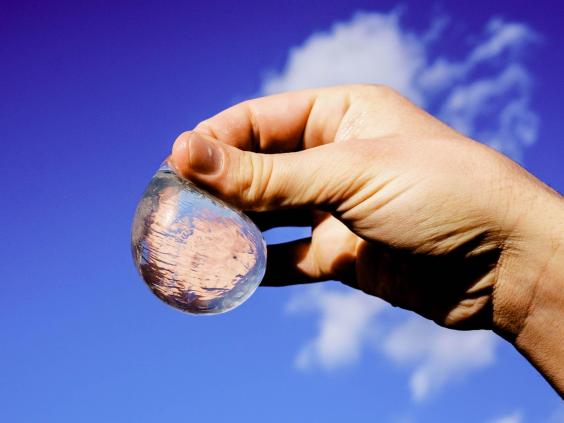 Water in the Ooho is contained by an edible, seaweed-based membrane (Katherine Fawsett)
Their goal isn’t to add another brand of water to an already crowded market but instead to offer a new packaging technology. They envision a range of products so, for example, there would be one version with a very thin membrane suitable to hand out to runners in a race.  For the retail market, there would be another with a thicker outer layer that you could peel off and discard, making it more durable and hygienic.

Coming up with the idea for Ooho was the first step but turning it into a reality was another. “It’s definitely an uphill battle, I’m not going to lie. But at the same time, it’s easier than ever for ideas like this to become a reality,” Paslier says, but help from a programme called Climate-KIC, the EU’s climate innovation initiative, was invaluable in getting started.
It all makes for a business success story but listening to Paslier, the real joy comes from helping to solve a tricky problem. “What’s interesting is that we don’t necessarily want to block other people from exploring the potential of seaweed,” he says. “We want to be part of this ecosystem so of course we protect our technology, but I think there’s room for a lot of people to solve these problems.”
And what’s it like to eat/drink an Ooho? It’s surprisingly easy (I had worried that it would burst like a water balloon) and you can eat the seaweed membrane or discard it. “It’s fun, it’s different and provides a completely guilt-free experience,” says Paslier. Not bad for a drink of water.
For more information, visit skippingrockslab.com


Edible water: How eating little balls of H2O could be the answer to the world's plastic pollution | The Independent
.
.
.
Posted by Jeremy Woodward at 01:00