Meat should be taxed to help save the planet, think-tank suggests

Beef production contributes to global warming, in part due to methane emissions from the cows' digestive systems Photo: Alamy

By Emily Gosden, Energy Editor
12:01AM GMT 24 Nov 2015
Meat should be taxed to help tackle global warming, a leading think-tank has suggested, as it urged ministers to also reduce the amount of meat served in schools and hospitals.
Proceeds from a tax on meat could be used to subsidise healthier alternatives that are less damaging to the environment, such as fruit, vegetables and tofu, researchers from Chatham House said.
A “carbon tax” of £1.76 per kilo on the price of beef could reduce consumption by 14 per cent, a study they highlighted suggests.
In a report, the think-tank argues that the livestock sector has been “almost completely overlooked” in efforts to tackle climate change, despite the fact it accounts for about 15 per cent of global greenhouse emissions – the same proportion as direct emissions from cars, planes, trains and ships combined.

Public procurement represents a major opportunity to influence diets by reducing the meat on offer in schools, hospitals, armed forces and prisons, the researchers said  Photo: Alamy
Beef and lamb production are the worst for the environment, with emissions generated both in the production of the large quantities of animal feed and from the digestive systems of cattle and sheep directly.
• Hate wind farms? Eat chicken not beef
A carbon tax on meat would be one of the “most effective” policies to reduce meat consumption, the researchers said, and would also bring public health benefits, as average Britons eat about twice the amount of meat that is thought to be healthy.
The researchers acknowledged the policy would be one of the most unpopular options for reducing meat consumption but said focus group research suggested that “governments overestimate the public backlash that would follow from price increases and limits on food choices”.

Steak: bad for your health and bad for the environment
Public procurement also presented a major opportunity to influence diets by reducing the amount of meat and offering more vegetarian alternatives in places such as school, hospitals, prisons and the armed forces, they said.
Current global pledges to tackle climate change by cutting emissions – primarily in the power and transport sectors - are forecast to put the world on track for 2.7C warming this century.
According to the report, limiting global meat consumption to healthy levels could provide one-quarter of the further emissions cuts needed to limit warming to the 2C level that scientists say should not be exceeded if the world wants to avoid the most dangerous effects of climate change.

Meat should be taxed to help save the planet, think-tank suggests - Telegraph

Across the Pond, this observation was made at the time:

In the largest ever gathering of world leaders, the global representatives of 196 nations on Dec. 12 signed a historic climate change pact.
The consensus of great global powers and some of the planet's poorest nations alike was that the landmark agreement is necessary to make changes in human behavior that will slow and limit the earth's increasing temperature.
A new study, however, suggests that people worldwide need to make a change in their eating habits. And one way to accomplish such a dietary change might be a meat tax. 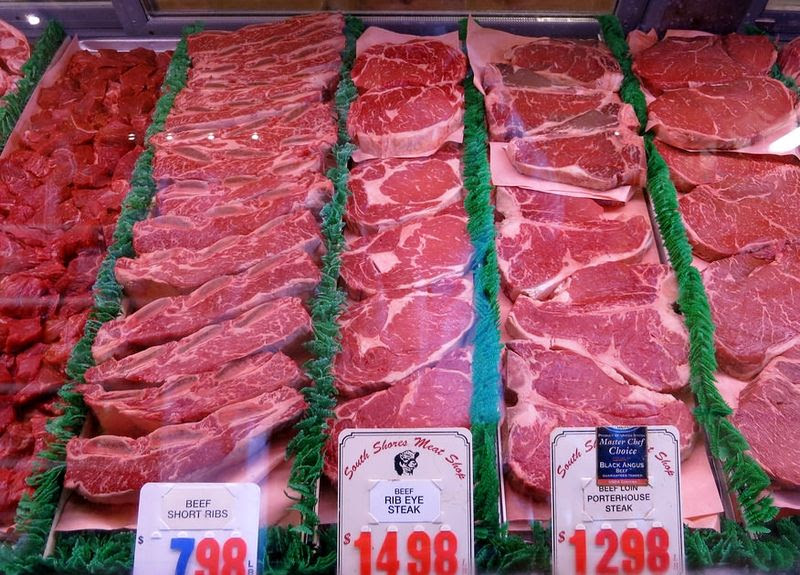 Would a tax on your steak and other meat cause you to change your eating habits? Some say it would in a way that could help ease global warming. Photo by Carlfbagge via Flickr.
Republicans discount human climate causes: Most scientists and citizens across the world agree that humans have affected and now can help alter for the better the effects of climate change.
Much of the Texas Congressional delegation, however, is not among that group. Lone Star State lawmakers, at almost all levels of government, tend to be climate change deniers.
That's not a big surprise, since so many Texas elected officials nowadays tend to be Republicans.
And the state GOP's official position is that "while we all strive to be good stewards of the earth, 'climate change' is a political agenda which attempts to control every aspect of our lives. We urge government at all levels to ignore any plea for money to fund global climate change or 'climate justice' initiatives."
That position expands beyond my native state's borders. In Washington, D.C., two Texans in on committees that oversee the country's scientific efforts recently have been slamming efforts to combat climate change.
Rep. Lamar Smith, chair of the House Science, Space and Technology Committee, has pressed ahead his inquiry that questions the processes and findings of the National Oceanic and Atmospheric Administration (NOAA). Smith wants to see NOAA internal emails on global warming research and has sought to bring the agency's chief and its staffers into closed-door, deposition-like interviews.
On the other side of Capitol Hill, Sen. Ted Cruz recently convened a hearing of his Subcommittee on Space, Science, and Competitiveness to discuss, in Cruz's words, "Data or Dogma? Promoting Open Inquiry in the Debate over the Magnitude of Human Impact on Earth's Climate."
While Cruz, who recently has picked up momentum in his quest to be the GOP's 2016 presidential nominee, described the hearing as open, the witnesses were skewed four-to-one against human involvement in climatological effects on our planet.
A beef with a warming planet: But sharing membership in the Republican Party might not be the only or main reason these Texans deny climate change.
It also could be because of one of the iconic symbols of my native state: beef.
All those herds of cattle scattered across Texas are enormous contributors to carbon emissions. And we steak and hamburger and barbecue lovers are to blame.
That's a key finding of Chatham House, the Royal Institute of International Affairs, an independent policy institute based in London. In a Nov. 24 report, the group said that reducing global meat consumption is critical to keeping global warming below the danger level cited in the Paris climate change accord.
The researchers also noted:
Taxes for the greater good: While it's difficult to change eating patterns -- trust me, I know. We eat smoked brisket a lot in our house. -- one way to shift consumer diets is through taxing what we eat.
"Interventions to change the relative prices of foods are likely to be among the most effective in changing consumption patterns," according to the report. "Opportunities include removal of direct or indirect subsidies to the livestock sector, subsidization of plant-based alternatives, or interventions to increase the price of meat and other unsustainable products, such as a carbon tax."
The report also points to product-specific taxes that it says have been used "by a number of governments to remove incentives for the consumption of certain unhealthy products, notably sugar-sweetened beverages." These cases, generally known as sin taxes, point to the potential for influencing meat and dairy consumption habits through taxes.
Laura Wellesley, a research associate at Chatham House, says she and her colleagues realize that the public response to a tax on all meat, not just beef, would be opposed by a large portion of the world's consumers. But she thinks that it won't last.
"Our focus group discussions seem to suggest that any resistance would be relatively short-lived," Wellesley told Fast Company. "There's a recognition that other behaviors have changed -- smoking, for example -- in response to government measures that may at first have been unpopular. People do tend to come to accept the need for those kinds of measures if the rationale behind them is made clear."
Cultural hurdles, too: However, the report does acknowledge that there are factors beyond price.
"The culture of meat-eating is complex and highly influential," according to the report. It cites "social norms, including meat-based meals cooked by close friends and family members," and the strength of such social interactions in countries as diverse as the United States, the United Kingdom and Brazil.
The weekend barbecue in Brazil is a long-established tradition that brings people together and, for some, it is the high point of the week, particularly in the south of the country, according to the report.
"There was a concern that to limit meat consumption might require respondents to sacrifice social activities and to be marginalized in their peer group by such behavior," notes Chatham House.
Sounds like Brazil is a lot like Texas.
Would a tax on beef or other meat make you change your diet? Or would you cut back on other food products in order to slap a T-bone on the grill every summer weekend?

Although perhaps the debate is becoming less 'political':
Climate Change and The Conservative Republican

And now Denmark is now proposing to slap a tax on meat:

And others don't:
I'm sick of fetishistic Instagrams gleefully celebrating meat - we need to consider a red meat tax like Denmark | Voices | The Independent