Going, going, gone >>> Disappearing Britain @ BBC Four >>> allowing buildings to fall into disrepair so they can be sold to developers

And yet it can be shown that looking after your assets can be worthwhile:
Futures Forum: Knowle relocation project: "gaining the most out of your existing buildings and demonstrating how they can continue to be valuable assets"

The film-maker Nick Broomfield has been looking at these ideas in a new documentary on BBC Four.

We’re used to Nick Broomfield as an investigative film-maker, headphones on, boom in hand, probing secrets. Here the secrets involve listed buildings in peril, including the Cardiff Coal Exchange, which Broomfield remembers from his time as a student in the 1960s.

It has since fallen into sad disrepair and campaigners suspect this is a tactic councils use with expensive-to-renovate listed buildings: left to rot long enough they can be declared unsafe and demolished – or sold to developers.

Broomfield’s film works as a love letter not just to one building but to Victorian streetscapes in general.

He was interviewed earlier by the Guardian and was asked why councils don't seem keen on protecting their heritage:

Is it just about money, or attitudes?
I think it’s in the head. It is so much to do with the imagination of planners. I talked to people at Cardiff council and they have a lot of embarrassment about the coal industry and the history of coal, because it led to disease and exploitation. They’re correct about that, but until people embrace their past they’re stuck in no man’s land. They’re denying their industry and also their culture and past.

In Going Going Gone you include people with memories of the buildings when they were still in use: an Afro-Caribbean woman who celebrated her golden wedding in the Exchange, an Irish Liverpudlian couple who fell in love at first sight in the Wellington Rooms. It’s obviously important to you to show something of the lives lived in them.
These buildings were built by the elite with no expense spared, but then became buildings of the people and people have a right to have a say in them. If you live in a democracy part of urban renewal should be that the public participate.

Are you hopeful that these buildings will be saved?
In terms of short-term gain the easiest thing is to knock buildings down but I am hopeful with both – they are dying to be made into something special. I don’t think it’s too late to save the historical area of Cardiff. There’s a plan for a luxury hotel in the Coal Exchange that might not be perfect, but it will attract other money and the place will kick off.
Nick Broomfield: ‘I’ve always been fascinated by buildings and history’ | Film | The Guardian

Here's the programme from this evening - available on the BBC i-player: 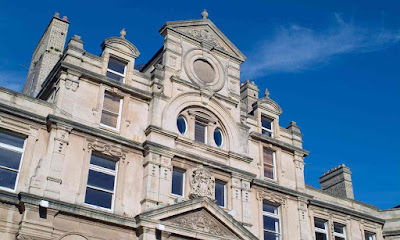 Two iconic British buildings are threatened with demolition and the intrepid Nick Broomfield is on the case. In a pair of documentaries, Broomfield profiles the Wellington Rooms in Liverpool and the CoalExchange in Cardiff.
The Wellington Rooms, built in 1815 by Edmund Aikin, was originally the social hub for the super-rich, slave traders, businessmen and the elite. The prime minister William Gladstone's family, themselves wealthy slave owners, invested heavily in this magnificent building with the most intricate detailing and proportions. A Wedgwood ceiling and sprung dance floor, with classical columns, create a building of love and light.
Despite the depression in Liverpool's fortunes, it's a building that has brought enormous happiness to many different people over a couple of centuries. Countless people seem to have fallen in love and met their future partners in the assembly room. Now in a rundown state of faded glory, the question is - what to do with the Wellington Rooms?
The Coal Exchange in Cardiff, built in 1883 by Edward Seward, is a magnificent celebration of the industry of coal and its immense wealth. A glass-ceilinged exchange room with galleries on three floors and a unique lowered floor are a remarkable monument to this time.
Now in serious neglect, the whole building, the size of a city block, faces demolition. It signifies the serious lack of resourcefulness on the part of Cardiff Council to celebrate and regenerate not only this building but the whole area. The once great Butetown Docks and the magnificent buildings surrounding the Coal Exchange have also been allowed to crumble and disintegrate. Rather than redevelop the docks in a way that they have been so wonderfully done in Liverpool, the docks in Cardiff have been filled in. Magnificent warehouses have been torn down, and the whole history of coal and the uniqueness of this area have been almost obliterated.