'Why our Drill Hall is nationally as well as locally important'

The website dedicated to researching the Drill Hall has constant updates:
Futures Forum: The Sidmouth Drill Hall research site >>> "Why the current building is worthy of retention."

This is from the latest pages which consider the detail of the interior - whilst giving it both historical and architectural context. [Reblogged with permission of the author]

Recent Drill Hall photographs show just how much of the original details still remain. They also provide an historical record of a type of building which is just starting to be appreciated.

According to the research document produced for Historic England in 2015, although thousands of Drill Halls were built between the late 1850s and the Second World War few remain in anything near their original state. This document ‘Drill Halls: a National Overview‘, by Katie Carmichael, helps us understand why our Drill Hall is nationally as well as locally important.

It has been established that there were about 350 purpose built drill halls erected before 1900, and it is estimated that 200 of those have been demolished or changed substantially by being converted to other uses.

As Ms Carmichael points out ‘Many drill halls are significant not only architecturally but also for their associations with local communities’.

She also says that ‘many drill halls are simple, undistinguished, utilitarian structures with little or no embellishment’. As the pictures on this site show our hall was not one of these, our hall was a proud statement about Sidmouth and its inhabitants.

East Devon District Council acquired the Drill Hall some years ago but will not let anyone in to document it. Fortunately when they had workmen in to check for the existence of asbestos in the building a passerby with a camera was able to make some records. The photos on this page are all taken from those and I am very grateful for the permission to use them here.

The layout of the building is over three floors, a basement, the main hall with two rooms flanking the entrance, and an upper room over these two rooms. The main hall is 60 feet by 30 feet and more than 18 feet high. Even with the current state of disrepair it is possible to see what a nice space it could be.

The roof is supported by ornamental beams and trusses as shown below. 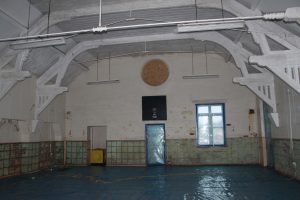 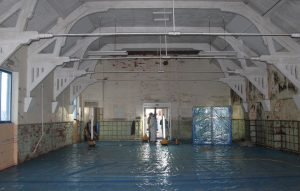 The iron ties are of one design at the south end of the hall and of a different design at the north end. This must be intentional as the ornamental parts match. 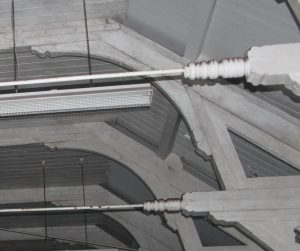 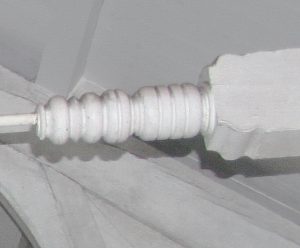 When the modern lights and the worst of the cosmetic damage is removed the hall looks more impressive. I am still searching for photos of the interior with  the original gas lights. The central door leads to the stairs to the lower level, and the door to the left is the entrance to the toilets which were a much later addition. 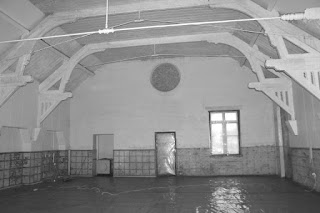 The panelling on the east and west walls is mostly still present, as is that in the basement and the upper room, although there is water damage. Certainly in the basement this seems to be mainly a condensation problem and this could well be the case in other areas too. This does not mean that there have not been earlier problems with the roof. 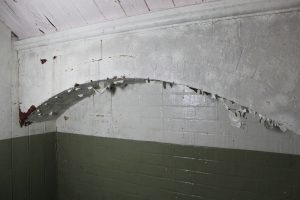 On the detailed images above you can see moisture condensing and running down. This is not water entering from outside as it was a hot sunny day and it is not penetrating damp as there is an approximately 10 foot gap between the outside of this wall and the Esplanade.
In the upper room there are indictions that some beams may be suffering from rot. This could be a relatively minor problem if only this area is affected.

With the high level of moisture in the air and the fact that the temperature varies a great deal it is not surprising the sandstone corbels have deteriorated over the past 121 years. This may have been made worse by boxing them in. 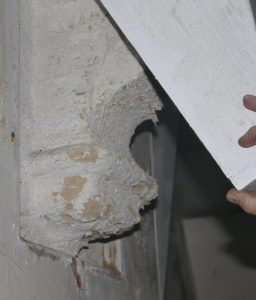 The south end of the hall still has the original glazing above the eastern door but the matching window which would have helped light the stairs has been filled in. The glazing shows us exactly what type of cathedral glass was originally used, this was the glass pattern used in the front doors too. 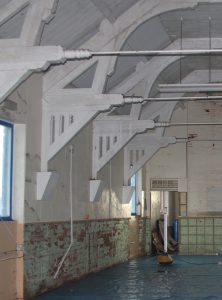 There is also an arch visible above the centre door, I suspect there would have been a fan-light there; even though the doors themselves had glass panels. This whole building was designed to be light and airy.