Peak stuff: and the 'experience economy'

The idea of 'peak stuff' seems to be gaining currency:
Futures Forum: Peak stuff >>> Are consumers getting tired of consuming?

Some have had enough - reacting to the annual spending frenzy of Black Friday:
Why I'm buying nothing for a year – no clothes, no holidays, no coffee ... | Money | The Guardian

And yet the prices of raw materials are going down:
Worst week for iron ore price since October 2011 | MINING.com

And have been doing so for some time:


Population and Income Doubled – And Most Commodity Prices Fell

Malthus was wrong, and Julian Simon was right

Five indexes rose in price between 1960 and 2015. However, only two indexes, energy and precious metals, increased more than income, appreciating 451 percent and 402 percent respectively. Three indexes increased less than income. They included “other” food (7 percent), timber (7 percent) and fertilizers (38 percent).

Taken together, commodities rose by 43 percent. 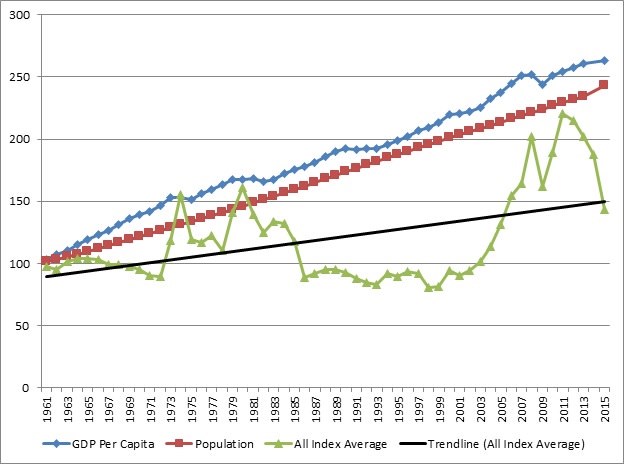 If energy and precious metals are excluded, they declined by 16 percent. 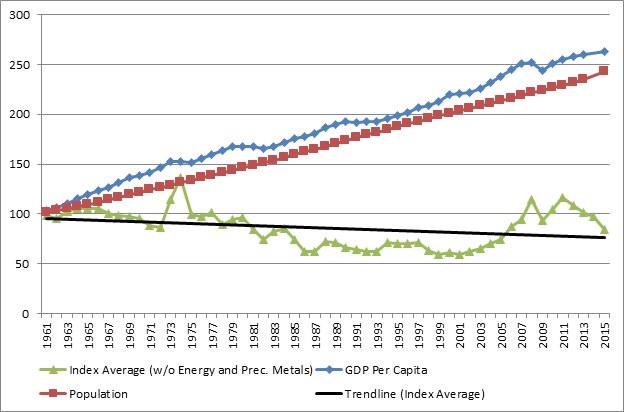 Assuming that an average inhabitant of the world spent exactly the same fraction of her income on the World Bank’s list of commodities in 1960 and in 2015, she would be better off under either scenario, since her income rose by 163 percent over the same time period.

This course of events was predicted by the contrarian economist Julian Simon some 35 years ago. In The Ultimate Resource, Simon noted that humans are intelligent animals, who innovate their way out of scarcity. In some cases, we have become more parsimonious in using natural resources. An aluminum can, for example, weighed about 3 ounces in 1959. Today, it weighs less than half an ounce. In other cases, we have replaced scarce resources with others. Instead of killing whales for lamp oil, for instance, we burn coal, oil and gas.

We should be using more natural resources, according to the classical model of supply and demand:
The Market and Scarce Resources | Foundation for Economic Education

But the figures show the reverse: 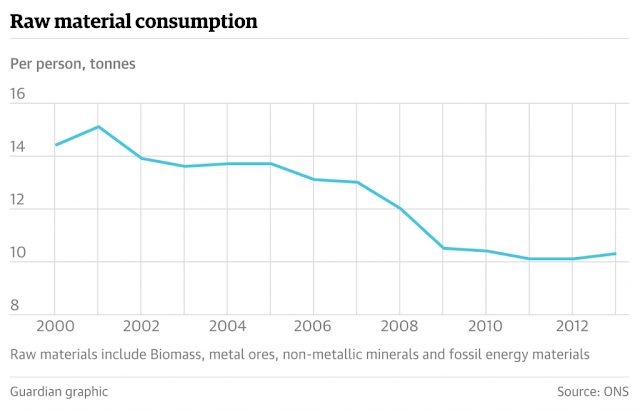 UK consumes far less than a decade ago – 'peak stuff' or something else? | Business | The Guardian

It's very much about 'sustainable design':
A decade of reduced UK consumption - better design or user behaviour?

And human ingenuity:
Scarcity or Abundance? A Debate on the Environment | Foundation for Economic Education

But it's also about changing habits:

The way we shop now: the revolution in British spending habits

They call it the “experience economy”: a huge shift in consumer behaviour is said to be under way, from buying things to doing things.

The demise of high street stalwarts BHS and Austin Reed, poor retail spending figures and a downturn in the number of people visiting high streets and shopping centres, are all being held up as evidence that Britons’ priorities are changing.

Earlier this year a senior Ikea executive warned that the appetite of western consumers to own ever more goods and chattels was probably waning. “In the west”, he warned, “we have probably hit peak stuff.”

Now retailers ranging from fashion to food chains are making similar observations, because official data shows that households are spending less on clothes and food but more on holidays, cars, entertainment and eating out. Spending on gadgets that keep people connected to the internet is also on the rise.

“We increasingly see a trend for consumers to spend more on experiences rather than on products,” said Kevin Jenkins, the UK and Ireland managing director of payment card group Visa Europe.

“Eating out, booking holidays and discovering new experiences are all driving spending growth at a time when the lower cost of living is creating higher disposable incomes.”

There are six areas where spending is growing and this is what they tell us about the changing way we shop...

Holidays: Leisure trips have increased by 10% since 2010

Online shopping: Number of vans of Britain's roads has hit a record 4m


The way we shop now: the revolution in British spending habits | Business | The Guardian

These ideas formed the context of the presentations during the Sidmouth Climate Week in March:

From the TourFish report:

– in its simplest form this is the selling of experiences. Responsible tourism experiences can be framed in a range of ways; however, connecting tourists in an authentic way with local sustainable food, local livelihoods and culture, and the meaning of place, is particularly relevant in the context of agri-food and small-scale fisheries.

RESPONSIBLE TOURISM: A GUIDE FOR TOURISM AND SUSTAINABILITY IN SMALL-SCALE FISHERIES AND AGRI-FOOD: EXECUTIVE SUMMARY

And from the Drill Hall report:

All respondents agreed that Responsible Tourism (RT) is important to Sidmouth’s future. Of those RT aspects, they ranked their importance in the following order:
1. Looking at opportunities for local producers to support Sidmouth’s local economy.
2. Strengthening Sidmouth’s identity as a place to live and visit.
3. Making decisions that respect the needs of future generations through sustainable actions.
4. Increasing social engagement for all sections of the community in Sidmouth
5. Helping to value cultural activities of local people.
6. Developing coastal education opportunities for local people and visitors.