The rise of hydropower: good news or bad news?

To what extent could the River Sid be used to create some hydroelectric power?
Futures Forum: Sidmouth hydroelectricity

It would not necessarily be a good thing - as George Monbiot reminded us when it came to the extensive damming of British Rivers in pre-Industrial Revolution times:

The damming and weiring of British rivers for watermills was small-scale, renewable, picturesque and devastating. By blocking the rivers and silting up the spawning beds, they helped bring to an end the gigantic runs of migratory fish that were once among our great natural spectacles and which fed much of Britain: wiping out sturgeon, lampreys and shad as well as most seatrout and salmon (Callum Roberts, 2007. The Unnatural History of the Sea. Gaia Thinking, London.)

A way of harnessing water power without damaging the environment is 'run-of-river' hydropower:

The latest from the New Economics Foundation looks at the latest: 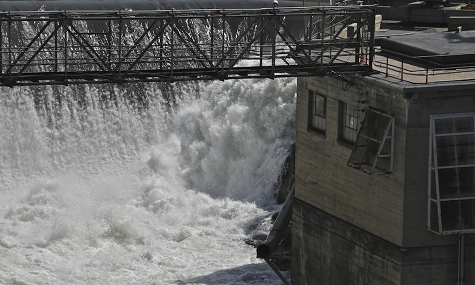 As global temperatures continue to rise and energy use remains high, we need to find ways of providing that energy in a cleaner way.

The rise of hydropower

Global hydropower capacity has been steadily growing since the 1960s and now makes up for about three quarters of total renewable energy generation – and this growth is set to continue.
Researchers predict a “global boom in hydropower dam construction” over the coming decades, with projects underway in the world’s major river basins – such as the Nile and the Amazon – and their tributaries
The World Energy Council estimates that global hydropower energy generation will double by 2050.

Both in developed and developing countries, hydropower is perceived as a viable alternative to fossil fuels. Big hydro plants can cover a sizeable fraction of energy needs in a centralized way and quickly replace dirty coal plants.
There are indirect emissions, linked to deforestation, flooding and vegetation decay in large reservoirs, but these are tiny compared to overall emissions savings.
So for tackling climate change, this is certainly good news.
But a just and sustainable energy system is about more than climate change. Big centralized projects translate into other big impacts.
Dam construction projects are threatening one third of global freshwater species found in the Amazon, Congo and Mekong rivers – and the income of communities relying on those fisheries – according to a recentScience paper.
Then there’s the relocation of local, sometimes indigenous, communities –often triggering conflicts or other social, economic and cultural losses.
Directly and indirectly, big dam construction projects may also contribute to river sedimentation and salinization; an altered water flow may also undermine freshwater uses for other downstream economic activities like irrigation for agriculture.

Hydropower’s effectiveness – it has by far the largest energy payback of any other renewable source – means we simply can’t ignore it if we’re to move away from fossil fuels.
But there are things we can do, like prioritising forms of hydroelectric power with the least possible impacts. For example, genuine “run-of-the-river” plants can reduce both environmental and economic risks – compared to dams and large reservoirs. Proper basin-wide assessments could be used to assess impacts on surrounding ecosystems and economies – prioritizing development with the lower risks
Small-scale hydro should be promoted, particularly in remote areas and communities without access to national grids
Large hydro projects should only be undertaken when all renewable alternatives have been exhausted, giving priority to solar and wind power which are seeing their costs plummet.
Hydropower comes with some catches, but managed well it has to be part of the mix in an energy system that moves away from fossil fuels.

A tax on red meat?
Denmark’s Ethics Council (the government’s think tank) has called for aspecial tax on red meat to deter consumption and reduce emissions from cattle. Along with positive climate and health impacts, research shows that a change in our dietary habits could also limit global biodiversity loss.
Japan’s car fleet goes electric
According to a recent survey, Japan now has more electric car charge points than petrol stations. Although this is largely symbolic, as many of those electric charge points are actually private, it has been estimated that electric vehicles may represent more than 35% of total car sales by 2040.
The UK is downgraded
Throughout the 2000s, the UK was topping the league of the most attractive global destinations for investment in renewables. But due to the current government’s policy, which scrapped incentives for renewable energy, the UK has been downgraded: it now ranks 13th globally. Reversing the government’s policy changes is critical for recovering the UK’s competitive advantage and increasing jobs in the renewable energy sector.