Here is the report itself: 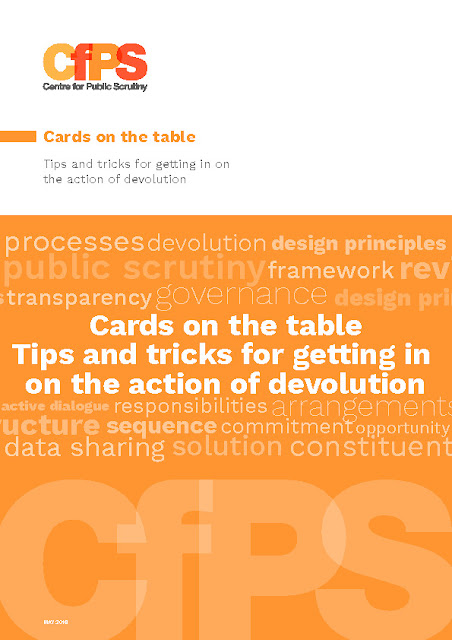 In September 2015 we published “Devo why, devo how?” – our opening thoughts on the fastdeveloping issue of English devolution. It would have been confusing if we had titled this new report “Devo who, devo when?”, but that is essentially its focus – exploring the critical role of two groups of people who we feel have been overlooked in discussions so far (non-executive councillors and the public) and when they might fruitfully and usefully “feed in” to the formulation of devolution plans.

In this document, we provide a clear and consistent way for local areas to address some of the principal governance challenges with which they are faced. This is not about thinking of governance during an initial “design” phase, or putting together a bolt-on solution once other elements of a devolution deal have been agreed. It is about seeing governance as a way both to successfully agree a deal – and secure sign-up from a wide range of local stakeholders – and as a way to put that deal in place on the ground.

Here the author of the report gives an overview:

The Centre for Public Scrutiny has just launched a new paper on devolution in England, writes Ed Hammond.
May 23, 2016
Our report, Cards on the table suggests the different stages that local areas will have to go through in agreeing and implementing a devolution deals – highlighting the fact that there is a sequence to the process, with each stage in that sequence demanding its own unique governance response. Many of these responses focus on the need to bring in the wider member corps, and the public, to discussions on devolution and its outcomes.
Member and public involvement is critical to the success of English devolution, but it is an element that until now many areas have filed away as “too difficult”. It never seems to be quite the right time to do it. Too early, and plans and proposals may be too vague. Too late, and the decisions may already have been made. In between, many of the negotiations with government are required – by government – to be private. What space is there?
We think that there is more space than you might think, but to take advantage of the opportunities requires a different mindset to that which has been prevalent up until now. Primarily, there are big opportunities to engage non-executive councillors and the public at the earliest stage – to talk to them about “the place” and what they want it to look like in the future. Having discussions with a wide group of people about the future, and their place in that future, helps to do three things:
Beyond these three reasons, there are the wider and less tangible benefits for local democracy of opening this process out at an early stage. Transparency is a good thing, and the more that local people know and understand about how devolution is likely to make a different to their lives, the more likely it is that political and community buy-in will happen later on in the process.
Our report suggests that local areas establish what we have termed a “governance framework” to help them to clarify fundamental issues around decision-making. We think that at its most basic such a framework might cover policy development, decision-making and the monitoring of performance. Crucially, such a framework would also highlight the steps that decision-makers would take to involve and engage the wider public in each of these issues. Bringing the public in to the devolution debate earlier on in the process means that agreeing clear and open systems for engagement and involvement becomes much easier.
Contrary to the accepted assumption amongst those who would resist this kind of public dialogue, the public are, in fact, interested in devolution. They are interested in economic development, in skills and jobs, in education, in transport, in public health and so on, because what difference devolution makes to those issues will have an impact on their daily lives. Best, then, to focus the public discussion on devolution on those outcomes.
Cards on the table, was published on 12 May and can be downloaded from the CfPS website.
Ed Hammond is Director of Local Accountability, CfPS