Rewilding Devon: the return of the lynx?

There is a successful 'rewilding' programme happening in Devon:
Futures Forum: On the River Otter: releasing beavers as part of the DWT's "groundbreaking project"

There are moves afoot to reintroduce another species to the wilds of Devon:
Watch: Are lynx returning to Devon's countryside? | Exeter Express and Echo 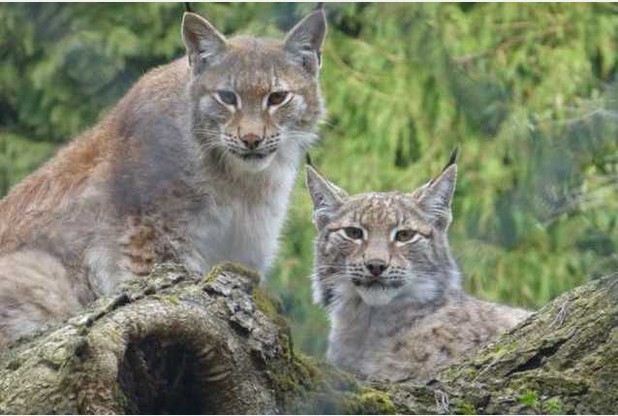 Could wild lynx like these soon roam free in the hills near you?
A wildlife trust has established a breeding programme which aims to rescue this formerly native animal of Devon from extinction and return them to "rewilded" areas.
The Wildwood Trust, which operates a visitor centre at Escot, near Ottery St Mary, is inviting visitors to see the lynx as they champion rewilding in Devon.
Peter Smith, Wildwood's founder, said: "Devon's uplands have been destroyed by a century of overgrazing and it is our aim to return the wildwood to its former condition. By changing the rules of agricultural subsidies and returning a top predator like a lynx, our uplands could blossom with wildlife and draw people from around the world to enjoy a rebirth of wildlife.


The charity claims that rewilding can create an ecological and tourism resurgence in the county. The trust has built a natural woodland enclosure which shows off these formerly native animals that once prowled the woodlands of Devon. They have establishing a breeding programme which aims to rescue this formerly native animal of Devon from extinction and return it to rewilded areas.
Wildwood's two lynx are young brothers, born in 2015, and were a gift from the Royal Zoological Society of Scotland. They can be seen on sunny days lounging on their giant fallen tree or in their den. On wet days, look for them in their warmest den at the side of the enclosure.

The two lynx are about to celebrate their first birthday; Theron, the spottier of the two, is Greek for hunter, a word used in Latin languages for the 'untamed' & Lorcan comes from the old Irish for 'little fierce one' .
Mr Smith said: "Rewilding has many benefits, with more jobs, and cleaner water and air. Rewilding can have a major impact on reducing flooding downstream to farms and towns. The list of benefits far outweighs the negatives and the real challenge of the rewilding movement is to allow a democratic debate for the majority of the population to reclaim public policy on how our wild lands are managed."
The trust said the lynx was not dangerous to people, with no recorded attacks on humans in the wild.
The large cat is a top predator which will change the behaviour of the sheep and deer that have grazed Britain's uplands. Animals will avoid rocky outcrops and gullies, allowing the wildwood to establish and grow, providing ecological diversity at no cost to the taxpayer.
Environmentalist George Monbiot issued a call for the rewilding of Dartmoor and Exmoor at a national parks conference in Bovey Tracy last year.
David George from the National Farmers' Union said: "The countryside that so many people enjoy is largely a product of farming and other man-made interventions. Reintroducing lynx is pie in the sky.
"You can't turn the clock back hundreds, if not thousands, of years. We don't know what would happen. Where it has been done in Spain it's in much larger areas."
Visitors to the Wildwood centre can also see other formerly native wildlife such as red squirrels, wild boar, wildcats, and even beavers on beaver watch evenings.
The park boasts features such as a maze, adventure play area and treetop drop slide.
Find out more at escot.wildwoodtrust.org or call 01404 822188.
Read the view of hill farmer Robin Milton here.
Are you ready to see lynx and wolves on Dartmoor and Exmoor?
Britain's uplands like Dartmoor and Exmoor should be returned to the wild for the benefit of human wellbeing, an Exeter conference has been told. Letting trees...
Anton Coaker: George's rewilding idea is garbage - let's move on
George Monbiot? I've been waiting for the dust to settle, before having my tuppence-worth. And remember, it's my family, my local community, and my extended...

Sheep are the 'white plague' of Dartmoor says activist

Dartmoor has been ruined by sheep, a meeting of national parks chiefs has been told.Writer and environmental activist George Monbiot called for the "rewild...
Wildlife watch: Big cats could return to Devon countryside | Plymouth Herald