The Energiewende: How the supplier is becoming obsolete. ... or: How Germany's sustainable energy transformation is disrupting the utilities industry.

On this week's Radio 4 programme looking at the influence of EF Schumacher on today's economy, the head of energy utilities company Good Energy stated that 'the supplier becomes obsolete' as they morph into 'a platform' or as 'a facilitator for decentralised power' - as most people can generate their own power:
Futures Forum: Schumacher: Is Small the next Big?

Exactly that is happening now in Germany.

The headlines looked at how people were being paid to use surplus electricity generated by renewables:
Germany paid people to use electricity as prices entered negative over the weekend | Daily Mail Online
95% of Germany's energy was provided by renewables last Sunday - ScienceAlert
Germany Made So Much Renewable Energy Last Weekend That Customers Actually Made Money - Huffingtonpost

But there is a more interesting, long-term development happening:

Germany continues to strongly support the country’s Energiewende, which seeks to lift the share of sustainable energy to at least 60% by 2050, as well as reduce the country’s reliance of foreign energy, create jobs and help the Germans meet climate goals. The process is, however, shaking up the utilities industry, as a result the sector needs to reimagine a role for itself and transform its legacy operations to meet changing expectations.
Germany has long prided itself on taking the issue of long term sustainability of the environment, for themselves, and their children, serious. The concept of Energiewende (or “energy transition”) continues to define a generation of Germans' relationship with future generations. Energiewende aims at reducing the country’s carbon footprint by encouraging households, communities and businesses to adopt green energy sources, through a range of levers, including subsidies. The effect of the focus on renewables has been stark, with the country now producing 25% of its energy demand from renewable sources. The long term Energiewende goal would see 60%-80% of energy generation stem from green sources by 2050.
In a new analysis from Oliver Wyman, titled ‘Power Generation Disruption: Germany’s case for change’, the consultancy explores the current Energiewende trend as well as the effect it is having on the legacy utility industries that are seeking to preserve, and even enhance, their networks, in the face of disruptive transformation hitting their frontiers.

The survey finds that Germans have some concerns about the Energiewende programme, with particularly the increase in ‘on-grid’ energy prices cited as an issue. While there are concerns, the majority of respondents are willing to invest in the technology, with more than 60% willing to invest more than $1,100 into a sustainable investment. Two thirds of respondents require some form of subsidy to do so – with upfront costs projected to have paid for itself within three to five years.
The research highlights that support for Energiewende remains very high among three key stakeholder groups, households, industry and utilities. 14% of households believe the strategy is very good and 64% believe it is good. Industry is more positive about the strategy, 22% say it is very good and 57% good. Utilities are a little more reserved, with 9% saying it is very good and 68% good.
Recent changes to the German renewable energy act have been viewed as generally favourable by all groups surveyed, although private households were less positive about the changes than the utilities industry. 26% of households see the changes as negative, and 12% as very negative, while 22% of utilities see the changes in a negative way. 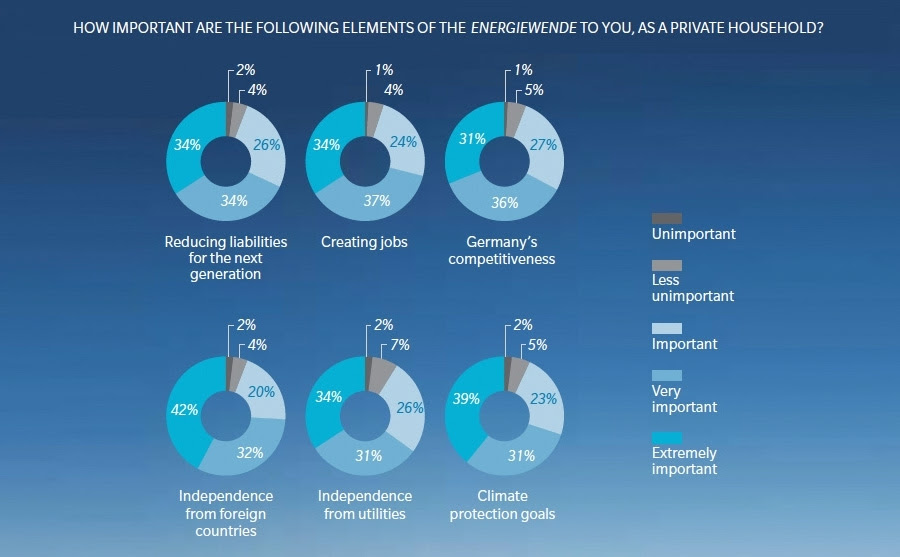 While the changes to one of the Acts that underlay the current Energiewende are seen by a minority as negative, the vast majority of German households views the Energiewende as important on a variety measures.
Reducing the country’s liabilities for the next generation is extremely important to 34% of those surveyed, while a further 34% thought it was very important. In terms of creating jobs, 34% cited as extremely important and 37% as very important. In terms of reducing the country’s dependence on foreign countries, 42% cited the phenomenon as extremely important while 32% saw it as very important. Climate protection goals were cited as at extremely important by 39% and very important by 31% of German respondents.
The consultancy notes that the legacy centralised transmissions systems still operated by utilities may be in trouble as sentiment and technology converge on disruptive generation. The authors of the article further highlight that Germany’s energy transition should serve as a wake-up call for utilities everywhere. "Renewables and direct generation are part of a wave of disruption and innovation that will impact many energy markets in the future – much in the same way that mobile phones disrupted the previously static landline telecom industry and the Internet caused dislocation in a wide swath of retail and media business models. These other instances have demonstrated that treating innovation as a threat will end your business in a hurry; planning ahead, on the other hand, can open up tremendous new sources of value.”