The decision by the District Council to raise substantially the cost of their beach huts has caused quite a stir:
Futures Forum: East Devon beach huts: "If they are losing 26 per cent, and next year want another 50 per cent rent increase, it only goes to show it was a very bad decision in the first place."

This was anticipated some time ago:

By Exeter Express and Echo | Posted: January 29, 2016
A decision to double the rent to hire many beach huts in East Devon has been made earlier than anticipated. The hikes were agreed on Thursday – four days earlier than East District Devon Council (EDDC) previously expected it to be confirmed.

A spokesperson for EDDC said: “To help us decide how much to increase our rents by, we compared our hire charges for beach huts sites in East Devon with those made by other local authorities (Torbay, Teignbridge, Torridge, Brighton & Hove, Adur & Worthing and Poole).

The EDW blog has noted the strangeness of comparing East Devon and East Sussex:

SIDMOUTH ISN’T BRIGHTON – BUT WE KNEW THAT!

Result? 115 people gave up their huts (out of a total if 445), people on waiting lists declined offers and empty sites abounded. They had to resort to advertising on the huts in Sidmouth to get people to take them up.

If sites ARE taken up all it now proves is that:

A. Sidmouth – and Exmouth, Budleigh and Seaton are NOT Brighton.
B. The Asset Management has no idea what asset management is.
C. Only the really well-off can now afford to rent sites.

Thanks Councillor Pook, thanks for nothing.

Sidmouth isn’t Brighton – but WE knew that! | East Devon Watch

It's not just Brighton...

Poole just happens to be one of the most expensive places for a beach hut:
Dorset beach huts up for sale for £200,000 each despite no water or electricity | Daily Mail Online

And there are plenty of other expensive places around the country to 'compare' prices with - why not add Christchurch or St Ives?
Beach huts for HIRE and for SALE... from the UK's leading beach hut company...

The latest Herald carries the story: 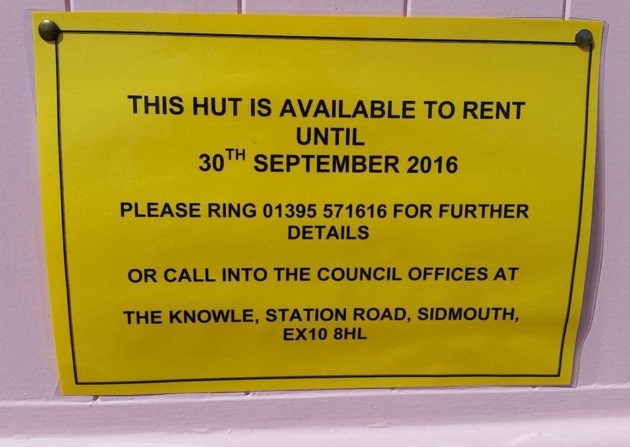 Once-lengthy waiting lists were exhausted for the first time in years as tenants – who will see costs almost double over two years - failed to renew their leases and East Devon District Council (EDDC) was forced to put up vacancy notices.

The authority confirmed early this week that 115 people out of 445 across East Devon decided not to keep their beach huts. It said a high number of vacancies could lead to a review of the charges.

An EDDC spokesperson confirmed the last vacancy in Sidmouth’s 24 huts was filled on Wednesday and added that the majority had gone to local residents – after fears had been expressed that townsfolk would be ‘priced out’.

District councillor Marianne Rixson, ward member for Sidmouth/Sidford, said: “The slow take-up of beach huts in Sidmouth was predictable. At EDDC’s scrutiny meeting, I challenged this outrageous price hike. Previously there has been a waiting list, whereas this year the council has had to resort to adverts on the beach huts to encourage people to rent them. Next year, more desperate measures may well be called for. Despite justifiable opposition from both councillors and residents, EDDC refused to listen to common sense and this has been the result.”

Anna Thompson formerly rented a beach hut at Jacob’s Ladder. She said: “I’m not at all surprised, but I do think it’s sad that people have been denied access to a once-popular resource because of an unrealistic budget decision by EDDC. Because I turned down my tenancy this year, even if they drop the price next year, I will have lost my place and will not be allowed back on the waiting list.”

An EDDC spokesperson said: “The number of beach hut tenants who have decided not to renew is 115 [out of a total of 445 across East Devon]. This equates to a retention rate of 76 per cent. We are currently working through our remaining waiting lists, which have been reopened for the first time in many years, to try and re-let the remaining vacant beach hut sites. If we exhaust this and still have vacant beach hut sites, we will advertise them.

“If, at the end of the year, we reach a position where we still have a high degree of vacant huts, a review of our charges will be undertaken. We will carry out consultation with town and parish councils progressively throughout this year.”