Peak stuff >>> Are consumers getting tired of consuming?

With the demise of BHS, Janet Street-Porter reflects on 'peak stuff' and the end of shopping:
The BHS fiasco is a sign British brands are on the decline | Voices | The Independent

Here is an interesting overview from the food and drinks industry:


Are consumers getting tired of consuming?

In debates around the use of natural resources, a popular narrative is that humankind is consuming its way to disaster - going to hell in a shopping basket if you like. We can do all in our power to make manufacturing and transportation – or just the very process of existing – as efficient as possible but, however much progress we make, it will not be enough unless something is also done about demand.

It is our voracious appetite for 'stuff' that is at the heart of the problem.

According to the ONS, the amount of raw materials – biomass, metal ores, non-metallic minerals and fossil fuels – consumed in the UK in 2013 fell from a peak of 889.9m tonnes in 2001 to 659.1m tonnes. The decrease represents a drop from about 15 tonnes to 10 tonnes per person.

There are a number of explanations for this trend. Greater resource efficiency is clearly partly responsible. While the weight of imported products has risen since 2000, the quantity of material used to manufacture those products has decreased, the ONS said. Technological progress may fuel demand for gadgets and appliances by making them more affordable and accessible, but it can also reduce consumption of raw materials.

For example, the digital revolution has reduced demand for CDs and DVDs, while household goods and other devices become ever lighter and more compact as technology advances.

Post-industrial economies see a swing from manufacturing to service industries, with the resulting lower utilisation of raw materials. This is supported by further ONS data pointing to an increase in resource productivity, the relationship between economic activity and material consumption.

However, the most intriguing explanation put forward is that the UK has reached "peak stuff", that rampant consumerism itself is slowing down.

What is true for the UK could be posited for other developed markets. Indeed, supporting the 'peak stuff' thesis are views expressed by Ikea's sustainability chief, Steve Howard, about the West in general at The Guardian's Sustainability Debate in January: "If we look on a global basis," Howard said, "in the West, we have probably hit peak stuff. We talk about peak oil. I'd say we've hit peak red meat, peak sugar, peak stuff," Howard then went on to characterise saturation point in home furnishings as "peak curtains".

If there is one organisation whose very existence would appear coupled to the unquenchable appetite of Western consumers for 'stuff', it must surely be Ikea. Indeed, some commentators have suggested this was a slip by Howard, in view of Ikea's ambitious growth plans, but this seems unlikely.

Even if "peak stuff" were to render developed countries zero-sum markets, there would always be market share to be gained, even for giants like Ikea. Moreover, Western shoppers may be becoming a harder seam to mine. In comparison, however, consumers in emerging markets have barely started. For that reason, 'peak stuff' can only be greeted with tempered optimism on environmental grounds.

Howard linked IKEA's acceptance of this new normal to its plans to develop business in repairing products. "We will be increasingly building a circular Ikea where you can repair and recycle products," he said.

'Peak stuff' could indeed be about an end to the throwaway consumer culture, but there appear to be multiple drivers acting on consumers and the companies serving them. The growth of the circular economy is certainly a factor, but there is also the idea that people are either simply running out of room, or at the very least want to de-clutter their living space.

The growing self-storage sector in the US and Europe underlines the point. According to the Federation of European Self Storage Associations (FEDESSA), last year saw a 7.1% increase in the number of self-storage facilities across Europe. The UK market is the largest, accounting for 39% of the total number of European facilities, followed by France, the Netherlands, Spain, Germany and Sweden. The biggest growth has also been in the UK, where around 50 new facilities have opened in the last 12 months.

Another consumer trend appearing to underpin theories around peak stuff is the growth in renting in the US. Clothes rental is also back in fashion, with companies such as Rent the Runway offering designer dresses on loan. And, at one extreme, Pittsburgh undertakers Lanigan Funeral Home operates a coffin rental facility, that being the ultimate in possessions that you will only use once.

Perhaps the least believable – but most fascinating – hypothesis is that people are simply becoming bored of consumerism. A visit to any shopping centre on a Saturday afternoon would suggest this cannot be so, and recreational shopping is still very much a feature of modern life. Meanwhile, according to the European Automobile Manufacturers' Association, new car sales have increased across Europe for 31 consecutive months, and numbers have almost returned to pre-crisis levels. The lure of the shiny and new still appears relatively strong.

However much wind remains in the sails of traditional consumerism, what the notion of peak stuff undoubtedly speaks to is increasing consumer discernment. Whether it is because of a lack of space, shopper fatigue or environmental concerns, people increasingly require good reasons to consume.

This is as much the case for the food and drinks sectors as any other, but the implications for companies of developed markets reaching 'peak stuff' are arguably less worrying than for some manufacturing sectors. First and foremost, food and drink are necessities of life. That said, the imperatives of hydration and nutrition aside, food and drink consumption is also about recreation and leisure. Indeed, food and drinks producers span the agricultural, manufacturing and leisure/service sectors in a unique way. The swing towards the service sectors should hold little fear for drinks producers, and in fact provides plenty of opportunity.

In his book, Stuffocation, futurist James Wallman writes about the move away from traditional consumerism towards "experientialism". Millennials, in particular, are prone to thinking about spending and leisure in this way. Food and drinks products are physical consumer goods but are experiential for human beings in just about the most direct way anything could be. And, highly relevant to the 'peak stuff' hypothesis, then they are gone.

If people are concerned about further cluttering up their lives, consumer goods, which are by definition not retained but, quite literally, consumed, are clearly at a distinct advantage.

This column was originally published on just-food.com sister site just-drinks.com.
Are consumers getting tired of consuming? | Food Industry Comment | just-food

Some would argue that human ingenuity and innovation releases resources:
Futures Forum: The promises of technological innovation >>> "The Fourth Industrial Revolution" and the future of work
Futures Forum: Creating/destroying jobs >>> Creative Destruction and Artificial Intelligence

And we are getting quite clever:
We've Hit 'Peak Stuff' Thanks to Technology | Gizmodo UK

And that includes the Bank of England and the Financial Times:


The Bank of England is no stranger to off-beat studies in its Bank Underground blog. Today, it is edging into truly unusual ground: happiness. In short, maybe consumption is over-rated.
“Less is more,” writes Dan Nixon at the Bank.

Economic theory generally assumes that more consumption means greater happiness. This post puts forward an alternative, “less is more” perspective based around the concept of mindfulness. It argues that we may achieve greater happiness by seeking to simplify our desires, rather than satisfy them.

So much for retail sales data.
‘Mindfulness’ is now offered as a course at the Bank of England, the blog says. Awareness of mindfulness can be good for mental health and cognitive skills, Mr Nixon writes.
Some excerpts:

But there are more profound lessons for economics, too.
At root, mindfulness can be understood in terms of what I call – for want of a less clichéd expression – a “less is more” approach to the relationship between consumption and happiness…
We can be happier by seeking to simplify our desires rather than satisfy them; the result is less consumption yet more utility.
The “less is more” theory contests the fundamental notion that, beyond a certain level at least, utility increases with consumption. This is pretty profound.
The debate on secular stagnation provides extra motivation for looking at new ways to achieve happiness.

Read more: Furniture designer Tom Dixon warns ‘we have too much stuff now’

Peak stuff? ‘Less is more’ suggests Bank of England
How less stuff could make us happier – and fix stagnation | Business | The Guardian 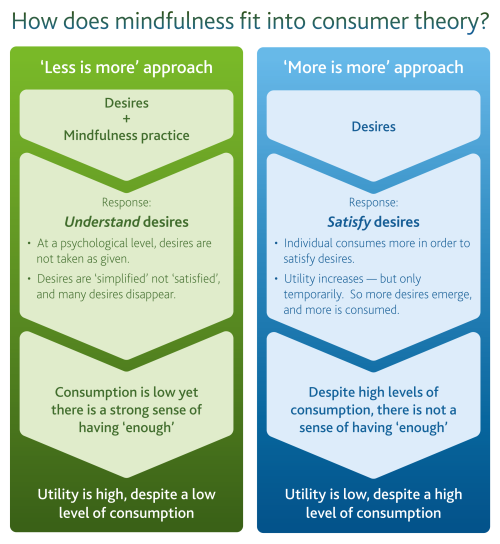 Less is more: what does mindfulness mean for economics? | Bank Underground

See also:
Futures Forum: Are we running out of resources?
Futures Forum: From Sustainable Development to Degrowth: strategic concepts in a time of downturn
Futures Forum: The Circular Economy
Futures Forum: Can supermarkets ever be sustainable? ... 'Localising economies is a better way of making an economy more transparent and giving people more control.'
Futures Forum: Planned Obsolescence: and The Men Who Made Us Spend
Futures Forum: The antidote to Stuffocation: "Sharing, lending, bartering, swapping and gifting networks can all play a part and creating things can be done collaboratively."
Futures Forum: The Story of Stuff: "You cannot run a linear system on a finite planet indefinitely"
.
.
.
Posted by Jeremy Woodward at 08:58