Here's a view from the Speciality Food magazine: 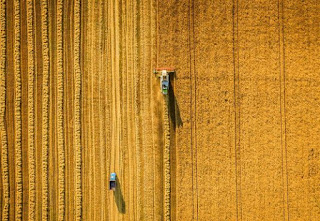 We know that the agriculture places a burden on the planet – with the sector accounting for 21 per cent of global CO2 emissions from 2000 to 2010 – but the impacts have come full circle, with climate change having a destructive effect on farming.

Last December saw temperatures falling as low as -15°C in the UK, while the summer experienced regular thirty degree temperatures. Scientists say it is too early to confirm the exact effects man-made climate change has on the planet, but they widely agree that climate change played a part in the summer’s heatwave.

With summer harvests now at an end, producers are able to take stock of the damage and gain an understanding for how this will affect the wider food industry.

As discussed in the October issue of Speciality Food, many crops have suffered ill effects due to the summer’s drought: wheat, potatoes, onions and feed for livestock to name a few. These and more are yielding a shorter supply, which gives rise to several pressing concerns, from reduced availability and affordability of key staples to the UK becoming reliant on European imports at the expense of British farmers.

Potatoes have been hit hard, with fears of crisp shortages looking to become a reality. According to the Agriculture and Horticulture Development Board’s strategy director for potatoes, Rob Clayton, planting is down 3% from the previous year due to struggles with drilling through the wet spring.

This reduction is equal to around 180,000 tonnes of potatoes, plus the heatwave has resulted in a smaller yield, which exacerbates the problem. While the UK is over 95% self-sufficient in fresh potatoes and 50% self-sufficient in processed potatoes, turning its gaze outward may not be a possibility, and not just out of pride.

TURNING OVER A NEW LEAF

UK lettuce growers have borne the brunt of the heatwave, and even in spite of the arrival of late summer rainfall, the British Leafy Salads Association reports that the crop has struggled. This is because lettuce is put under immense stress with hot, dry weather, and is unable to grow at temperatures above 30°C. However, despite signalling tougher times ahead for lettuce growers – with further extreme weather expected in years to come – other salad leaves are far more resistant to such conditions and may become a viable alternative in our climate-challenged times.

Watercress is a good example: aptly named, it grows in flowing spring water and is usually sourced from stable, reliable aquifers underground, meaning that the temperature is lower and it can keep crops cool.

The National Farmers’ Union (NFU) recently hit out at the government for “failing to act” on promises made by Michael Gove earlier this year to “ease the immediate pressure on farmers”.

NFU president Minette Batters argued that, compared to efforts by devolved governments in Scotland and Wales, England was failing to provide “meaningful assistance” to farmers to cope with long-term impacts of drought. As global warming looks set to incite further extreme weather, how can the government work with farmers to ensure consistent food supply?

For Tim Benton, professor of population ecology and global food security expert at Leeds University, “it’s not simply about developing drought-resistant crops”. He outlines how weather is likely to become more variable and unpredictable, especially if there is a step change in the Gulf Stream, which will mean a plunging of temperatures across Europe and a serious decrease in agricultural production.

There is a need for long-term forecasting, efficient irrigation methods, development of GM crops and an increased range of crops planted among other potential solutions. But, these will only come to fruition if backed by funding and policy, so it is crucial that the government recognise the potential havoc that
weather extremes can wreak, and act fast.

As trends are increasingly driven by millennials’ demand for eco-friendly options – with a recent Unilever study revealing that a third of consumers prefer sustainable brands – perhaps it’s the next logical step that consumers will start opting for food crops that can thrive in spite of climate change. But as many British farmers are faced with lower yields and poorer-quality produce, relying on consumer habits is not enough – the government need to make concerted effort to support initiatives which help farmers cope with the effects of climate change.

Until then, farmers will have to reap the impacts from climate change that the agricultural sector has been sowing for many years.