Knowle relocation project: how vulnerable is Honiton HQ builder? >>> “Like Carillion, this firm has very few tangible assets and a lot of its value is dependent on estimates of future earnings, which may change.”

The spanking new £10m+ building in the heart of Honiton's industrial estate is nearing completion:
Futures Forum: Knowle relocation project: ready to move, but at what cost...

But will it be finished in time?
Futures Forum: Knowle relocation project: how vulnerable is Honiton HQ builder?

Because things are hotting up for the builder:
Interserve shares dive on rising concerns over future - BBC News
ALEX BRUMMER: Precarious position of Interserve reveals the perils of public contracts | This is Money
Interserve says it’s on track amid fears of another Carillion | Business | The Times
Another company with local government outsourcing contracts hits the headlines | East Devon Watch 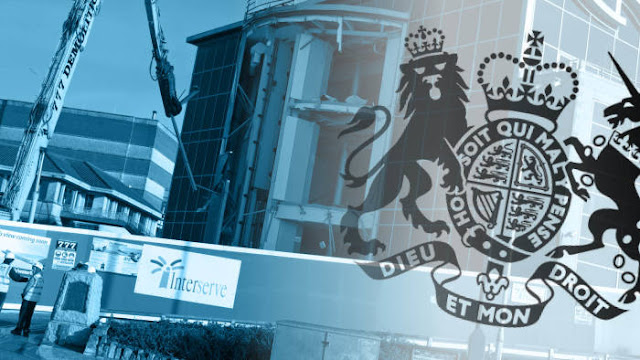 Interserve relies heavily on the UK government for its revenues

Fears are growing over the financial health of Interserve, one of the British government’s biggest contractors, just months after the dramatic collapse of rival Carillion.

Complaints from a business partner over a key contract and an increase in the number of investors betting against Interserve’s shares triggered sharp falls in the outsourcer’s value this week, raising concerns of a fresh crisis in the industry.

“First Carillion, now Interserve, this shows there is something structurally wrong with the entire outsourcing model,” says Adam Leaver, professor of accounting at the University of Sheffield. “The entire industry is in need of reform.”

Interserve employs 80,000 people worldwide — 25,000 in the UK — in jobs that range from cleaning London Underground to maintaining army bases and building a shopping centre in Dubai. It has revenues of £3.25bn but is valued by the stock market at just £75m.

Like Carillion, the UK government contractor that went bust in January, Interserve is a construction company that made bumper profits maintaining schools and hospitals under PFI schemes, before moving into public services following the financial crash.

It has been plunged into difficulty by a series of ill-timed acquisitions and by expanding into probation, healthcare and waste-to-energy contracts, areas in which it had no experience. 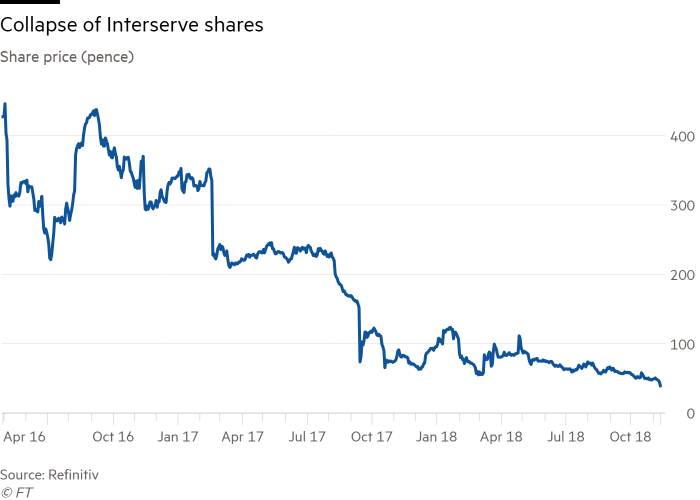 “Interserve seems to be on a downward spiral,” says Stephen Rawlinson, an independent analyst. “Suppliers and subcontractors are increasingly refusing to work for the company and that is leading customers and funders to question their support.”

Interserve paid only 17 per cent of its invoices on agreed terms in the six months to 30 July 2018, according to Build UK, the industry lobby group. The contractor also took an average of 50 days to pay its suppliers.

The company sought to downplay the concerns on Tuesday, saying its recovery plan “is on track . . . and continues to expect a significant operating profit improvement in 2018.” Interserve’s share price, which had fallen almost 20 per cent on Tuesday morning, bounced back to close up slightly at about 40p.

But if cleaning hospitals is one of the regular day jobs, eradicating the rot from the balance sheet is proving a much harder task. Lenders, led by HSBC and RBS, agreed a last-ditch rescue package in March that gave Interserve breathing space to restructure following a breach in its banking terms last year.

There has been little sign of improvement since: the FTSE 250 company swung to a £6m pre-tax loss in the first half, while net debt increased to £645m, including the £31m cost of its financial rescue.

The agreement with the banks came at a price. Lenders gave the company borrowing facilities of £834m until September 2021 — a deal that effectively sold 20 per cent of the business to lenders at just 10p a share. 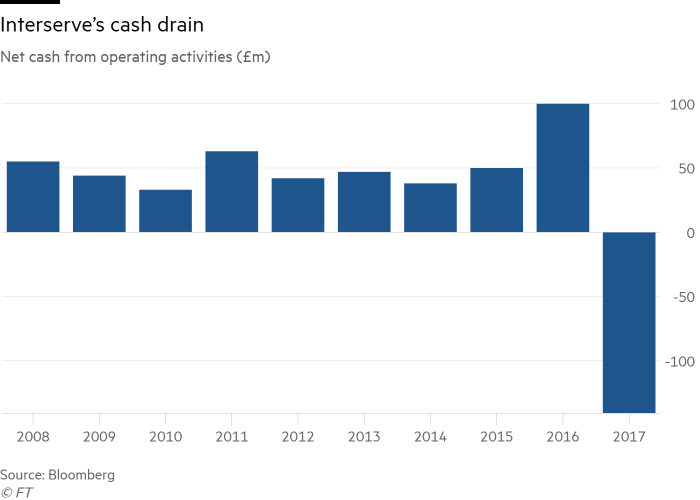 Mr Rawlinson says Interserve ran into trouble in 2013 when it bought Rentokil Initial’s office-cleaning business for £250m — contracts that turned out to be a “mixed bag of low-margin work”. Problems mounted when it bought an oil-services business in the Middle East just before the oil price halved and contracts running a back-to-work scheme for the jobless just as employment levels started to rise.

A turnround plan led by chief executive Debbie White involves 1,500 job cuts, selling off non-core businesses and getting out of its disastrous foray into energy-from-waste plants. But serious issues with a £145m energy-from-waste plant in Derby make it uncertain whether the £162.8m writedowns are sufficient.

The government has continued to award Interserve new work including a £67m deal cleaning embassies for the Foreign and Commonwealth Office. But the company is still trying to renegotiate lossmaking contracts, including one providing probation services for Britain’s Ministry of Justice and another delivering facilities management for US military bases.

A rise in employment costs, including the minimum wage, has also weighed on many of Interserve’s contracts, particularly those delivering healthcare services in people’s homes; rival Mitie’s home-care business was sold for just £1. Interserve has also warned that it is losing money on some construction contracts, while its work in the Middle East is vulnerable to payment delays.

Also worrying investors is the underlying weakness on a balance sheet that, like Carillion’s, carries large amounts of goodwill — the amount paid for a company acquired in excess to the net assets — essentially a guess on future profitability. The company has £427.4m intangibles on its balance sheet, of which £372.9m is goodwill.

Prof Leaver added: “Like Carillion this firm has very few tangible assets and a lot of its value is dependent on estimates of future earnings, which may change.”

Hello Everybody,
My name is Mrs Sharon Sim. I live in Singapore and i am a happy woman today? and i told my self that any lender that rescue my family from our poor situation, i will refer any person that is looking for loan to him, he gave me happiness to me and my family, i was in need of a loan of $250,000.00 to start my life all over as i am a single mother with 3 kids I met this honest and GOD fearing man loan lender that help me with a loan of $250,000.00 SG. Dollar, he is a GOD fearing man, if you are in need of loan and you will pay back the loan please contact him tell him that is Mrs Sharon, that refer you to him. contact Dr Purva Pius,via email:(urgentloan22@gmail.com) Thank you.

I enjoyed reading your article. Please make more interesting topics like this on.
I'll come back for more :)

From Japs a researcher from Always Open Commerce