The Country Land and Business Association (CLA) has analysed hundreds of local authority planning policies - and says they are not helping villages:

More than 2,000 villages across England are overlooked by the local planning process as they are judged to be ‘unsustainable’ due to a lack of public services like a post office. Unsustainable villages are not allocated housing and have very limited development options to improve their sustainability, leaving them in a cycle of decline. Sustainability assessments measure villages against a range of services and amenities more akin to how previous generations lived and used services. Local authorities should factor in how advances in technology have helped to shape modern life and consider how emerging technology will change rural England. Only 18% of local authorities analysed by the CLA include the availability of broadband in their sustainability assessments.

This paper is summarised from the CLA report which can be downloaded here:
FINAL_CLA StrongFoundations Sustainable Villages lo res.pdf

What does sustainable mean?

Local authorities use ‘sustainability assessments’ to score settlements on the range of services available there or in close proximity. Villages are then placed in a hierarchy according to their score, with the Local Plan allocating new housing to those towards the top of the hierarchy. Settlements where development is allocated by the plan are deemed to be sustainable, while those with fewer services are deemed unsustainable.

The impact of not taking more proactive steps to improve the sustainability of small rural locations will be a continuation and deterioration of the metrics shown in this paper. Policy change at the national level is part of the response, but it is at the local level that change is most needed. The most important change required is for the Government to require local authorities to take a proactive role in supporting communities currently considered ‘unsustainable’.

The professional press have been very interested:
More than 2,000 villages overlooked for affordable homes
Over 2,000 English villages 'overlooked for homes due to outdated assessment criteria' | Planning Resource

As has the broader media: 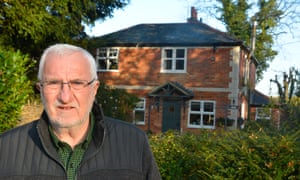 Peter Richardson outside his property in Howe Hill, which is among the villages labelled unsustainable. Photograph: John Robertson for the Guardian


More than 2,000 English villages risk being “frozen in time” because town halls have ruled they are unsustainable and not suitable for new homes, rural landowners have warned.

Cornwall, Wiltshire and central Lincolnshire are the areas with the most villages that, according to local planning strategies, cannot easily be expanded with new homes because they lack access to services such as post offices and primary schools.

Critics say that the system of branding villages unsustainable is being driven by nimby opposition to development. They add that it is causing a shortage of affordable rural housing and that younger people being forced to move to towns and cities. This means some villages will be inhabited by ageing populations, which potentially stores up problems for social care in the future.

The Country Land and Business Association (CLA), which has analysed hundreds of local authority planning policies, said: “The process effectively fossilises these villages instead of seeking to address the reasons behind why services are being lost, creating a cycle of decline.”

More than 200 villages in Cornwall, more than 100 in south Oxfordshire and 75 villages in Huntingdonshire are among those identified as unsustainable.

The CLA said the approach to planning had led to the stagnation of thousands of rural communities, with research showing that out of the 16,000 settlements of 3,000 people or less, 2,154 villages fall into what it calls the sustainability trap.

More than 4 million people in England live in rural villages and hamlets, which is about 8% of the total population. The CLA says that councils are taking the wrong things into account when deciding where homes should be built. It found that only a fifth of councils considered the availability of broadband in their assessment of whether villages could take more homes, compared with the 92% that take into account the availability of a pub.

Tim Breitmeyer, the CLA’s president, said: “Updating rural planning policy to include connectivity in sustainability assessments means English villages will not be trapped in analogue when the rest of the world is in the digital age and can access much of the housing they desperately need.”

Howe Hill, a village outside Watlington in Oxfordshire, is among those labelled unsustainable.

“The consequence of not being able to build new housing is that we will eventually go into terminal decline,” said Peter Richardson, a Howe Hill resident who wants to sell of part of his acre-large housing to build a new house. “Young people are less likely to stay and we need new families coming in to provide economic and social support.

He said the problem was “nimbyism exposed”, adding that there would be less need to build large extensions to other places if more villages were allowed to build small numbers of new homes.

Martin Tett, a housing spokesman for the Local Government Association, said: “Councils are committed to tackling the housing crisis and delivering the right homes in the right places. “Crucially, this includes councils working with their communities to develop and agree local plans, setting out their vision for developments where they live. As every street, village, town and city is different and will have different levels of need and opportunity for housing growth, it should be for councils working with communities to determine how and where new homes are built.”