The decline of the local press: “Councillors and crooks must surely feel relaxed now that so few weeklies have sufficient space or journalists to cover councils and courts.”

Earlier this year, we had further closures of local papers - and comment from the Prime Minister:

We have just seen the demise of one of East Devon's local newspapers:
Futures Forum: View News East Devon to close

However, the group behind the Express & Echo and the Western Morning News has promised investment and commitment to local journalism:
Futures Forum: Trinity Mirror South West takes on new Devon reporters >>> "It is vitally important that local politics is scrutinised and reported on by an independent media."

And there are other people and organisations trying to open things up:
Futures Forum: Debunking fake news in East Devon with 'on-line open-source investigation'

Because we have a lot of work on our hands:
Futures Forum: A conversation on power without responsibility >>> British Media in the 21st Century >>>

The Prime Minister has been talking about these things:
Decline of local journalism threatens democracy, says May | Media | The Guardian

Futures Forum: "The decline of local journalism is a threat to democracy and is fuelling the rise in fake news."

Here's an update on things from the Observer:


‘Councils and crooks must feel relaxed’: why the loss of local papers matters 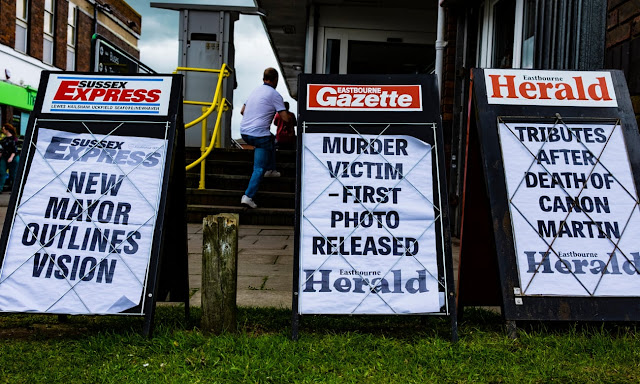 More than 300 titles, along with 6,000 jobs, have been lost in a decade. Photograph: Paul Swinney/Alamy

The collapse of regional press is a blow to democracy. But there may be hope

‘Councils and crooks must feel relaxed’: why the loss of local papers matters | Media | The Guardian
.
.
.
Posted by Jeremy Woodward at 01:00