“We must reduce the amount of material we waste: greater reuse is one way to ensure that pressure on resources diminishes." >>> but in the UK there is a postcode lottery on re-using goods. Some local councils encourage people to take items from recycling dumps – but others forbid it

Last month, the Environment Secretary was urging local authorities to allow people to take away stuff that would otherwise be thrown away: Homeowners should be allowed to scavenge for old televisions, furniture and appliances at dumps so they can reuse them, Michael Gove has suggested.

The Environment secretary told a meeting that he wanted to change rules at council recycling centres so people can recover valuables. Currently, many local authorities ban people from taking away anything their tips,however Mr Gove said he wanted the rules to be relaxed.

According to the Sunday Times, Mr Gove told a meeting: “We must reduce the amount of material we waste. At the moment if I take something to the dump for which I have no use but which you could happily have picked up and reused then you are not allowed to."

The recycling centres in Devon do try to avoid stuff from being chucked - and have a little shop for the better quality pieces that would otherwise end up in the skips:

We are dedicated to reducing, reusing, recycling, composting and as a last option, recovering energy wherever possible.

However, most recycling centres, including those in Devon, do not allow people to 'scavenge' as the Environment Secretary is suggesting:
Are you allowed to take from a Recycling centre? : AskUK

It's happening in Finland, though: 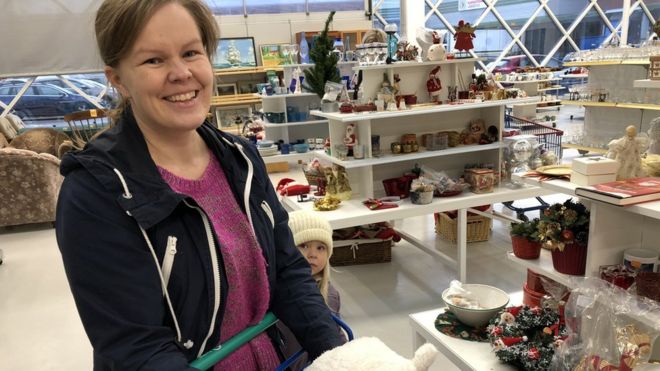 Kati Rossi was looking for a second-hand bookshelf

With her daughter and baby son, Kati Rossi is prowling a suburb of Helsinki in the hunt for a second-hand bookshelf. Across the road looms a Swedish furniture giant, but Kati is scouring a huge municipal re-use centre instead.

“I don’t want to go to IKEA,” she tells me. "I will find something much more interesting here, and much more original. I don’t want to have the same furniture as everyone else. What I buy here will be a fraction of the price and better for the planet.”

As concern grows about the resources we’re using and the CO2 that is producing our goods, does this place hold lessons for the world?

It is one of a network of giant non-profit re-use stores in Finland. Not the regular sort of second-hand or thrift stores you find on the High Street, but giant supermarkets named Kierrätyskeskus. 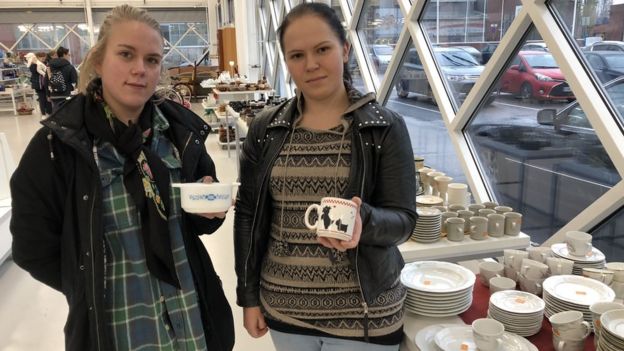 The centres repair electrical goods, upcycle some items with their own brand label, and they even have a digital personal shopper – a smart app which predicts the items you’ll want based on previous purchases.

In the furniture section, two friends on a day off from the office are browsing together.

Hannamarie Johansson tells me: “I’m looking for new clothes for my new job. I bring clothes that I don't use any more. You bring something and buy something.”

Pinja Lauria says: “I really like these places. I used to live in Luxembourg where they have second-hand shops – but not like this. They just had clothes and books, not furniture. I’m looking for new tables today.” 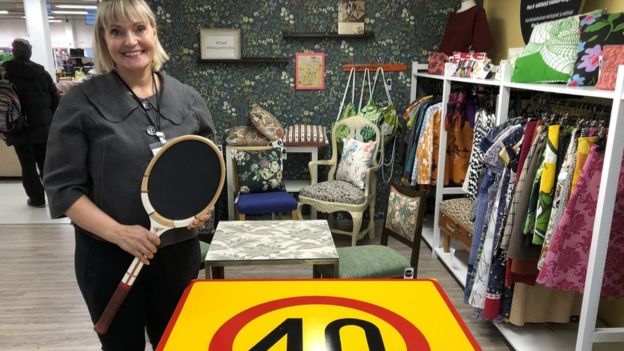 Peppi Mattila is the store manager

And it is so much more than a store. Shop manager Peppi Mattila gives me a tour of the upcycling section of the shop, known as Plan B.

It features some stylish classic clothes made from old curtains (they’re not in fashion so they’ll never go out of fashion). There is also a bench made from a snowboard; a table fashioned from a 40km/h traffic sign; and a stylish tray made from a leather-covered box lid faced with black-and-white cartoon comics.

This range of highly individual items sells for more than standard “second-hand” prices.

Peppi tells me: “We want to create appreciation of old stuff. These things are unique and totally made new. We have to think more and more like this.” 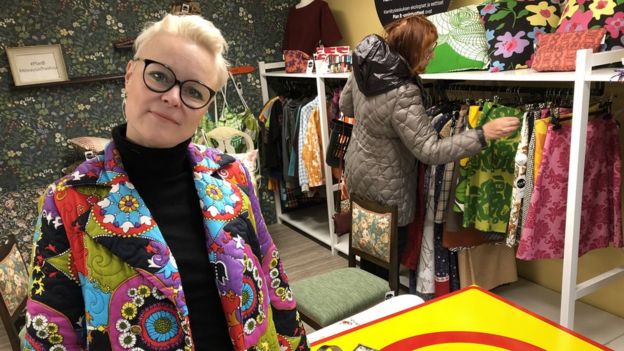 An Instagram blogger Tuire Lindstrom – in an outrageous coat bought second-hand – enthuses over the individuality of stuff here.

She tells me: “I’m only interested in clothing if it has something quirky about it.”

The Kierrätyskeskus store even has an educational mission. 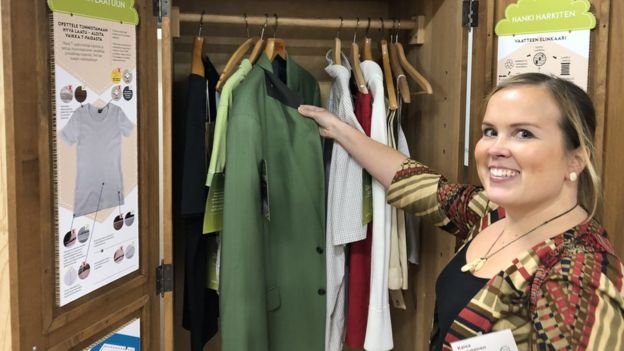 Kaisa Karjalainen with her learning wardrobe

Kaisa Karjalainen, the resident environment specialist, shows me to the “learning wardrobe”.

Schoolchildren come here to learn how to investigate the quality of clothes. If the makers have invested in sewing neat seams or carefully stiffening a collar, they are also likely to have also used good-quality cloth.

“Over recent years we have really noticed an increase in throwaway fashion,” she says. It’s difficult to find clothes that last more than a few washes – we have to put more clothes into the bin because they are so badly worn out.”

Everyone who buys an item from the store gets a little pat on the back on their till receipt, too. It shows how much natural resources you have saved by buying by avoiding the purchase of a new item. 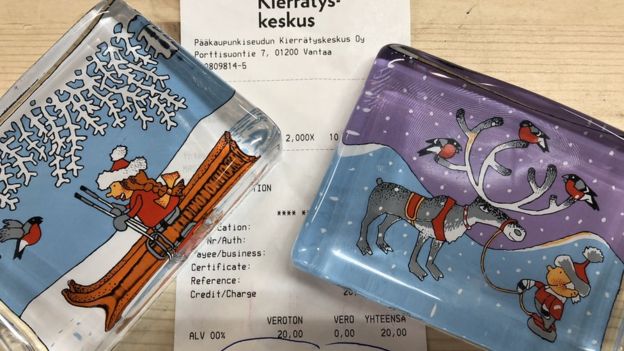 Christmas decorations: helping to save the environment

The receipt thanks me for saving 84kg (185lb) in natural resources used in creating the ornaments - oil, sand, dyes, chemicals and more. The store estimates it saved 50 million kilograms of resources in total last year.

I wondered if giant stores like Kierrätyskeskus would run out of stuff to sell as people supply charity stores and trade things on the Internet.

Maybe people will even try to consume less?

“It would be good if that’s right,” Kaisa says. “But I’m afraid there is so much stuff being thrown away that it’s unlikely to change anytime soon.”

Round the world are countless systems to collect and re-use items, from street scavenging in poor nations to sophisticated internet trading in rich ones.

Australia has an organisation called Reversegarbage. In the US, Ann Arbor is one of many places with a ReUse Center selling a huge variety of reused household and building materials. 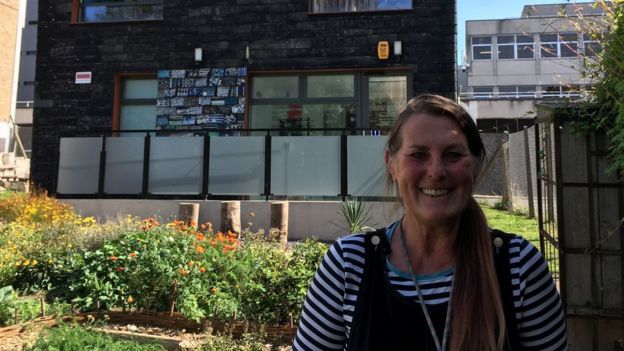 Cat Fletcher is spearheading a re-use drive in Brighton

In the UK, self titled “Re-use Goddess” Cat Fletcher is fomenting a re-use revolution from her base in Brighton. She complains that in the UK there is a postcode lottery on re-using goods.

Some local councils encourage people to take items from recycling dumps – but others forbid it, often on grounds of health and safety and liability.

“We have got to try much harder on this agenda,” she tells me. "So much good material is going to waste.”

In north Yorkshire, for instance, Jim Aldridge took a lawnmower to dump at the local tip. Another customer asked him if he could take it.

“But,” he said, “The employee at the tip said we would both have to drive off the site to hand the mower over. If we did it on site, it was considered to be trading - which was not allowed. He said once the goods left my car boot, they became the property of the council. It’s a bit daft.”

Is this about to change? The UK Environment Secretary Michael Gove will produce a new waste and resources strategy in coming weeks.

He recently said: “We must reduce the amount of material we waste. It’s not an answer to everything but greater reuse is one way to ensure that pressure on resources diminishes. Resource efficiency is good for the economy.”

Will he deliver on these words?

Politicians everywhere are under increasing pressure to re-use resources. The pressure group RREUSE has a simple slogan - it is time to put second-hand first.