The latest idea is to do something about that all pervasive piece of plastic pollution - the discarded cigarette end:
Futures Forum: TerraCycle comes to Sidmouth > a project to collect and recycle cigarette butts

Here's a report from Denise Bickley, head of the Plastic Warriors, after a trip to see how other groups are doing - and a lot of very interesting things they are doing:


I visited Cardiff last weekend (13th Oct 18) as Sidmouth’s Regional Rep for Surfers Against Sewage, as they invited all of the reps for a conference, from Friday 6pm to Saturday 4pm. I drove up after work but got very lost so unfortunately missed most of the Friday evening (including the CEO of Iceland Foods) but was fully ready for everything that Saturday threw at me!
We had planned to start the morning off with a Stand Up Paddleboard clean up of Cardiff Bay, but unfortunately Storm Callum had other ideas. Heavy rain, lashing winds and strong currents meant that was off, and in the end even the planned beach clean didn’t happen as it was just plain dangerous. We made a video of a very short beach clean we managed, but that was all unfortunately. I think if we’d been a day later we could have made an amazing difference as the Bay area after the storm was by most accounts full of rubbish.
Heading back to the venue for the day, we had a talk from Hugo Tagholm, CEO of Surfers Against Sewage. He updated us with everything that is happening with SAS, from a new water quality app, to the Parliamentary Group that he is involved with, the Ocean Conservation Register, and a visit from HRH Prince Charles to SAS’s head office recently – all a far cry from how SAS started out. To see how many people are now involved with the charity is very exciting.
Then we had an amazing talk from James Honeyborn, the Exec Director of Blue Planet 2. He spoke about interesting animals they’d met while filming; shared anecdotes about the cast and their experiences in the deep ocean and in extreme areas. It was amazing to hear him talk with such passion about the series, and about David Attenborough, and he got a very large round of applause. One thing he said will stay with me:

“The Oceans’ capacity to recover is extraordinary”

When left alone, away from human intervention, the oceans will right themselves. It’s us that is the problem of course. James told us of an area renowned for piracy, and how nobody fishes there any more, and the species are all returning in abundance.
One of the stories he told was of a clever fish who had learnt to pick up clams in his mouth and use the same stone to repeatedly throw the clam against, in order to break them open. He said he realised that fish were intelligent. When we were able to ask questions I asked him if he saw fish as food still, now he knows how intelligent they are. He wryly told me he only eats fish he’s caught…not quite the answer I hoped for as a vegan but at lest it’s made him think!
Then Lucy Siegle from TV’s The One Show, journalist, and author of ‘Turning the Tide on Plastic’ spoke to us (while wearing a ‘King David’ T shirt with a picture of David Attenborough). She is amazingly engaging and very funny, but it is unbelievable how long she has been saying the same message. Her trigger point is coconuts wrapped in plastic – she has been having the same argument with supermarkets for 12 years. They disappeared for a while and she thought it was over, but then they appeared again in most major supermarkets. She highlighted how the earth has gone from the Holocene to Anthropocene era (the period during which human activity has been the dominant influence on climate and the environment) and it seems to have largely gone unnoticed. Lucy told us that the BBC have commissioned a show on Climate Change which will be coming soon, told us to read “To Die For” and to watch the recent Stacey Dooley documentary regarding Fast Fashion. She also told us to listen to the Podcast “Pod Save America”. My favourite quote from Lucy is

“Nobody passionately defends a plastic spork”

This resonates – we must get rid of totally nonsense plastic immediately, followed rapidly by other single use plastic.
Then Dan Webb, a man from Margate who found that his council did not recycle anything, and decided to keep all his rubbish for a whole year, spoke to us about how he did it, what he had at the end of it, what he did with it and how the data and statistics broke down. His website is www.everydayplastic.org/
After this we had another chat from Hugo about what is to come, and how there is a DEFRA consultation about the Deposit Return Scheme, open at the moment. For the Autumn Beach & River Clean (ours is on Friday 26th Oct) there is a survey that will be completed. The government at the moment think that just one size of plastic bottle will be accepted, but SAS want all sizes, plus glass bottles, to be accepted. We also will be using a campaign soon to be launched along the “Return to Offender” idea, after the success of the Walkers Crisps campaign. 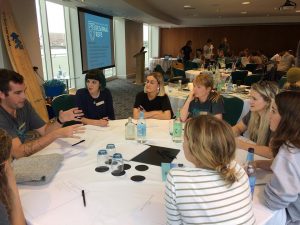 After some delicious lunch (chickpea curry for anyone who’s interested, followed by a delicious vegan cheesecake type desert) we had a talk more about specific roles of Regional Reps, and what to expect in the coming year, and then broke out into groups organised by area; I joined the South West. It was great to be able to talk to the organisers at SAS about what our roles should be, how to get other people to take some of the burden (I always find this difficult because a) I am a control freak who can’t say no and b) that is twinned with an inability to ask for help. I will be changing this soon and asking for more help with beach cleans – in particular getting the stuff to the beach and packing up afterwards, and also making everyone aware that I am just the custodian of the beach clean equipment, anyone can borrow it at any time (with a little notice!) and if there is somewhere better to store it that would be great. It’s all in my garage at the moment.
It was a great short weekend, that re-energised me and made me realise that we all have to step up and equip everyone to be custodians of their local area, amateur scientists, researchers, activists etc. We have to motivate, encourage and educate – while not becoming burnt out and depressed. It’s a difficult line to tread.
Dx