In spring, concerns were being voiced about the amount of traffic going through Sidbury:
Futures Forum: Campaign for safer roads in Sidbury launch > ‘kill your speed not villagers’ > Wednesday 25th April

And in the summer, the campaigners carried out a survey:
Futures Forum: Campaign for safer roads > Sidbury Traffic Action Group conducts speed surveys

The campaigners in Sidbury have now got the results of their traffic survey: 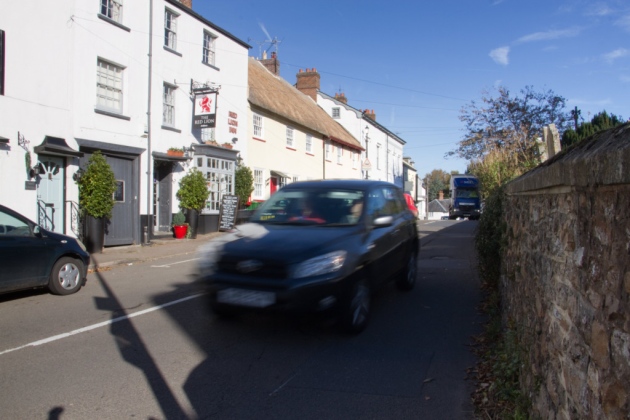 Nearly 30,000 cars are passing through Sidbury every week, a Freedom on Information request has revealed.

Devon County Council (DCC) has released the results of speed and traffic survey carried out on Cotford Road during one week in April.
The data revealed an average of 3,907 vehicles used the road daily, meaning an average of around 27,335 used it across the week. The data showed the average speed of the 3,907 vehicles:
• Only 461 were travelling within the 20mph speed limit.
• 2,776 travelled between 20mph and 30mph.
• 643 travelled between 30mph and 40mph.
• 25 travelled between 40mph and 50mph, and
• 1 was recorded at between 50mph to 55mph.
• 88 per cent did not stick to the speed limit.
• But the average mean speed for the week was 25.4mph.
According to emails, released as part of the request, a DCC traffic engineer said the data showed there had been a ‘moderate reduction’ in speeds in 2018 compared with survey results in 2011. He said the results showed there ‘did not seem to be a significant problem with speeding’, although he did acknowledge most drivers exceeded the 20mph speed limit.
A representative from the Sidbury Traffic Action said: “This survey was carried out in one week, not at a peak time and when there was no road works or diversions in place. Imagine what it is like in summer. People keep saying it is our perception. It is not - it is actuality. It is very clear, the official data demonstrates the vast volume of traffic that goes through Sidbury - and the fact that the vast majority of drivers actually break the limit.”
Councillor Stuart Hughes, who represents Highways, said: “The results of the most recent speed and traffic survey in Sidbury show no significant change to the speed and volume of traffic through the village over recent years. I recognise speeding remains a genuine concern for residents and many feel strongly about the speed and amount of traffic on streets near their homes.
“That’s why I am allocating part of my locality budget to fund a new Vehicle Activated Sign on the A375 at the entrance to the village. We are currently considering several locations.”

The group will be holding a meeting on 21st November: 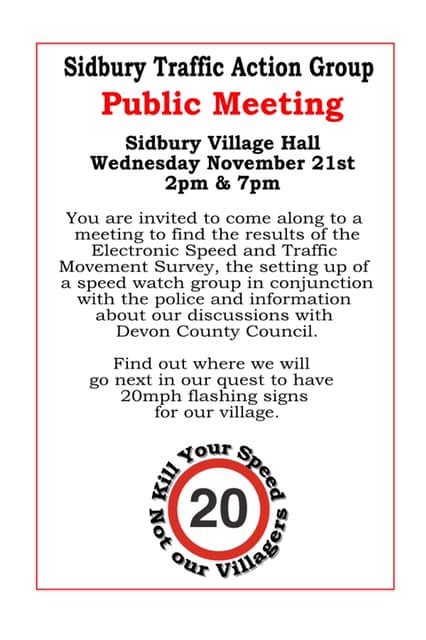