It has been suggested of late that the employment land allocation at Sidford provided for in the Local Plan should be removed:
Futures Forum: Take the business park land at Sidford out of the Local Plan

Exactly the same proposal was made back in March 2015, when Sidmouth's County and District Councillor said the Sidford site should be removed; and that if not and if it remained undeveloped, then it should be 'reexamined':


Furthermore
That the land north of Sidford between the Built Up Area Boundaries of Sidford and Sidbury and in the AONB be designated a Green Wedge.

The site between Sidford and Sidbury on the A375 would have a serious impact on the quality of life for the local residents of Sidford.

With more from his 'District' blog of that month:

Thank you Chairman for allowing me to address the Committee re employment land provision for Sidmouth and the Sid Valley……Cllr Peter Sullivan will be moving an amendment later today which calls for the contentious Sidford site to be removed from the draft plan and replaced by land north of the A3052 in the vicinity and to the east of the Sidmouth Garden Centre….This land has been confirmed available by the land owners and whilst also located in the AONB is by far more environmentally acceptable and is supported by the majority of local residents. It is indeed very close to the second choice site for Devon County Council’s replacement for the Woods Farm Recycling Centre and therefore.. if it had received the most popular vote would have been developed by now…. It would be up to you and the DMC members to decide how much should be allocated but certainly not 12 acres…..

There are many valid reasons why the Sidford site should be removed from the draft plan…flooding…traffic…and the impact on the AONB looking across the valley descending down the A3052 from Trow Hill……..There are also several other reasons that have just come to light and which support the removal of the Sidford site from the draft plan …The River Sid Project…..Visibility Assessment and the site would be significantly surcharged…..and also what I believe to be the most disturbing element…. in that the goalposts have been moved so far following the deletion from the text of (with any retail “ancillary to primary use of each unit”.) which madam chairman would certainly indicate to me that we could end up with a mini Cribbs Causeway on our doorstep spelling disaster for our Town Centre businesses and traffic chaos for Sidford and Sidbury…. I don’t believe County have carried out any vehicle movement predictions based on this significant change?

The amendment that Cllr Sullivan will be moving also makes it clear that the land north of the A3052 should only be developed as and when reqd following other sites reaching their full potential …. THE Alexandria Industrial Estate still has room for further expansion and it is heartening to see that the District Council is supporting the provision of a link road into the site from the B3176 and as County member I shall see how this can now be progressed.

I BELIEVE MY FELLOW WARD MEMBER GRAHAM TROMAN WILL BE ADDRESSING ISSUES RELATING TO Housing numbers, predicted jobs formula and the loss of previous employment sites over the past 20 years and therefore I now move to the second issue of the provision of a Green Wedge between Sidford and Sidbury which Cllr Sullivan shall also be moving an amendment later.

21.6 of the draft plan MAKES THE CASE FOR GREEN WEDGES and I believe that there can be no better candidate than that of the land between the settlements of Sidbury and Sidford firstly to protect the historic village of Sidbury from being absorbed into Sidford and Sidmouth and secondly to maintain the landscape setting in the AONB between the two settlements so that they can be enjoyed by both present and future generations.

In seconding the amendment I must say that I was totally taken back at the joint OS Audit and Governance meeting when Cllr Troman raised the issue of the Knowle/Exmouth model and was told that this hadn't been worked up....Why not? That is the question as it would appear to me to be an excellent option and would retain some jobs in the town.
To invest in your most valuable asset makes common sense and therefore Chairman the amendment would give time for this option to be thoroughly worked up.
More Haste less speed comes to mind here Chairman something that clearly hasn't been applied to the Sidmouth Beach Management Plan with a call for more information and a scheme now at least 5 years away.
At the special O/S Audit and Governance meeting I mentioned the notice of motion that I seconded by Graham Troman put to council well over 18 months ago regarding relocation and Michael Heseltines report to government No Stone Unturned in which he raised the issue of creation of further unitaries.....Not a dead duck as some would like us to believe but very likely to happen within the next 7 to 8 years no matter who forms the next government....that notice of motion still hasn't been debated? What I can say is a unitary Devon would see Sidmouth Town Council taking on more services and will require more accomodation and a scaled down Knowle would certainly fit the bill.

Finally Chairman I found the additional recommendation put to and accepted by the special meeting of O/S by Cllr Claire Wright to put a covenant on the remaining land which the Town Council would take responsibility for totally unnecessary. And furthermore Chairman I believe it smacks of the pot calling the kettle black when you consider that this Council is proposing to build on the grassed terraces which are one of the finest features of the Knowle Grounds.
Its therefore a shame that Cllr Wright hasn't attended a meeting of the town council since becoming the County member for Sidbury because if she had she would have seen for herself how the town council as custodians looks after the land its responsible for so that local residents and visitors to our town can enjoy what they have to offer both now and for the future........and so. Chairman I would urge members to support Cllr Tromans amendment this evening.

Brilliant news this afternoon The Full Council supported my amendment .. Seconded by Graham Troman for the land north of Sidford be deleted from the draft local plan.

Here is my full representation to Council on the amendment:-

Having attended the Special Development Management Committee on Monday I must say Chairman that I found the whole process very frustrating…… First of all following the public speaking non committee ward members were given their chance to speak and I was then almost closed down by the Chairman and the Chief Exec had to have a quiet word ….. I addressed the committee on the Sidford site in the local plan and in the afternoon Cllr Sullivan moved an amendment which was duly seconded by Cllr Allen that the Sidford site be removed from the draft plan and replaced by land north of the A3052 in the vicinity and to the east of the Sidmouth Garden Centre what Cllr Sullivan forget to include was the very important part of the amendment that being ‘To be developed as and when required following other sites reaching their full potential’. ……. The Sidford site has always been contentious with many valid reasons to delete it from the draft plan …. Flooding, traffic, impact on the AONB…No proven need.. and more recently the River Sid Project, Visibility Assessment and that the site would be significantly surcharged however members the most disturbing game changer the deletion of the text on ancillary to primary use of each unit which would appear to leave the door open to a mini Cribbs Causeway on our doorstep and which would put the final nail in the coffin of our town centre businesses….. Cllr Troman gave some important facts and figures which I hope he can give again this afternoon.

Come the debate by committee some 4 to 5 hours after Graham Christine and I had addressed the committee it appeared that members around the table had forgotten what we had actually said in the morning and I therefore seriously challenge the procedure and that of the Chief Executive who during other debates and amendments allowed deletion of some sites but resisted that of Sidford and instead suggesting a form of words to the Inspector regarding the unprecedented opposition to this site………whilst this form of words would and is a step in the right direction I still believe that we could go the extra mile and therefore Chairman when you take into consideration that this council now lends its support to a link road into the Alexandria Industrial Estate where there is room for further employment opportunities and as I mentioned at Mondays meeting that as the County member I shall do everything I can to see the implementation of the link road….. I therefore wish to move the following amendment Chairman that (d) the land north of Sidford be deleted from the draft local plan….. We don't need the site because evidence shows net inflow of workers to Sidmouth plus Sid water pollution study plus AONB plus Town and District member and local residents and organisations opposition.

Thanks must go to all the other speakers who supported and voted for the amendment...(Speakers) Peter Sullivan, Christine Drew, Frances Newth, Mike Allen, and Ray Bloxham ...............The residents and businesses of Sidford, Sidmouth will hopefully be delighted and we shall now work together into getting a link road into the Alexandria Industrial Estate so that it can reach its full potential.

And now the same proposals to remove the site from the Local Plan have been called 'unrealistic': 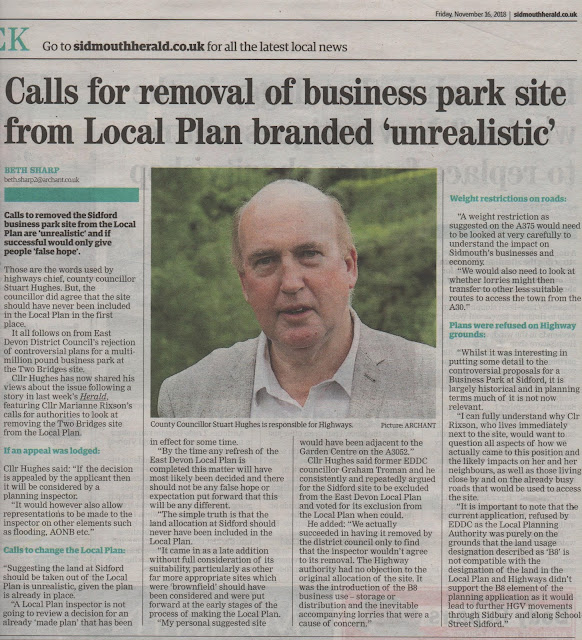