The rise of the 'meanwhile space': how empty properties are finding second lives


Meanwhile use of buildings

Commercial spaces can remain empty when one occupant leaves and another has yet to be found. These empty spaces can blight local areas, particularly in town and city centres, where vacant spaces such as shops can give a very bad impression. This can be a serious problem during recessions, when a number of properties in one area may remain empty.
The term ‘meanwhile use’ refers to the short-term use of temporarily empty buildings such as shops until they can be brought back into commercial use. It takes a potential problem and turns it into an opportunity and helps keep an area vibrant. The landlord will continue to look for a new commercial occupant for the space during the meanwhile use.
Meanwhile uses are generally for the benefit of the local community, for example; meeting spaces, informal training and learning spaces, temporary rehearsal spaces, pop-up shops and exhibitions, and so on. They can offer a breeding ground for innovative ideas and empower the local community. They can last just a few days or several years.
The agreement with the landlord might give the user responsibility for paying business rates and utilities costs but might not require payment of rent, service charges or building insurance. It might specify that the property can only be used for non-commercial purposes.
This can be to the benefit of the landlord who will no longer be liable for empty property business rates, may have lower security costs, and so on. This means they may be better off, even if they do not charge rent.

And here's a piece from the Guardian looking at projects in Paris:

The rise of the 'meanwhile space': how empty properties are finding second lives 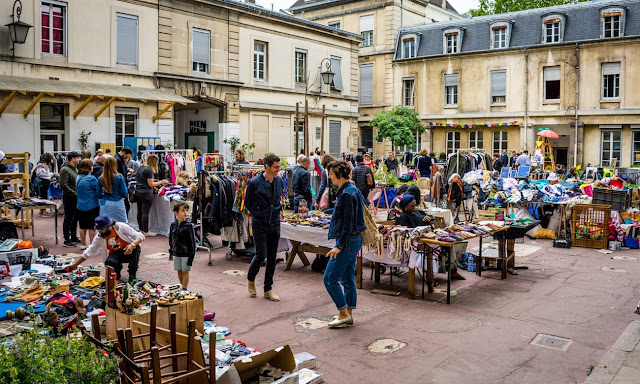 A market at Les Grands Voisins in Paris, formerly the Saint-Vincent-de-Paul hospital. Photograph: -

Rather than let properties lie empty, Paris is learning to hand them over temporarily to community groups and startups

H ospitals are rarely places of cheer and creativity, but the former Saint-Vincent-de-Paul hospital in Paris’s 14th district is one of the most exciting places on the left bank. Former ambulance bays and car parks now house allotments, a boules court, a makeshift football pitch and an urban campsite, and up to 1,000 visitors a day come to browse its market, eat at its cafes or catch a free live performance.

Renamed Les Grands Voisins, or The Great Neighbours, the site is a magnet for Parisians and tourists alike, its former treatment rooms, A&E building and wards now a hub of social and commercial enterprise. Alongside a hostel providing 600 beds for the homeless are artisan studios, pop-up shops and startups.
“It’s like a village, an inclusive space with social areas and job opportunities where different people can interact,” says William Dufourcq, director of Aurore, the charity that runs the homeless shelter. “We were overwhelmed with its success.”
Closed since 2011, the hospital is slated for redevelopment into a new neighbourhood with eco credentials, private and social housing, shops, commercial and public facilities and green space. Planning, clearance and construction on such a large scale takes time and, rather than leave the 3.4-hectare site empty for years, the developer, Paris Batignolles Aménagement, opened it to local organisations rent-free. The lease was scheduled to end this year, but has been extended until mid-2020 while construction begins on other parts of the site.

Les Grands Voisins is an example of a “meanwhile space”: a disused site temporarily leased or loaned by developers or the public sector to local community groups, arts organisations, start-ups and charities. Calls for making use of such spaces in other crowded urban centres are getting louder. A report published in October by the thinktank Centre for London highlights both the need for and positive possibilities of utilising empty urban sites and how this could transform the landscape of cities around the globe.
“The aim was to show the value ‘meanwhile use’ can add in cities where there is pressure on space,” says Nicolas Bosetti, one of the report researchers. He says public and private operators in Paris are more ambitious than those in London in exploring the use of disused buildings from metro stations to former nightclubs for short-term use as charity and cultural venues.
Other meanwhile spaces in Paris include Exelmans, a former police residence repurposed as a shelter for the homeless and refugees, run by Aurore on a two-year lease, and the Parmentier electricity substation, where the art collective La Générale has operated since 2008.
The substation, which is soon to be redeveloped, was included in Paris Reinvented, an initiative from the mayor’s office currently in its second year. Disused public sites are put up for auction to developers and architects who compete with plans for their redevelopment. “Les Grands Voisins showed how something like this can change an area and help plan future urban projects,” says Marion Waller, adviser to Paris’s deputy mayor for urban planning. “We didn’t want to sell buildings to the highest bidder but to the most innovative solution.” 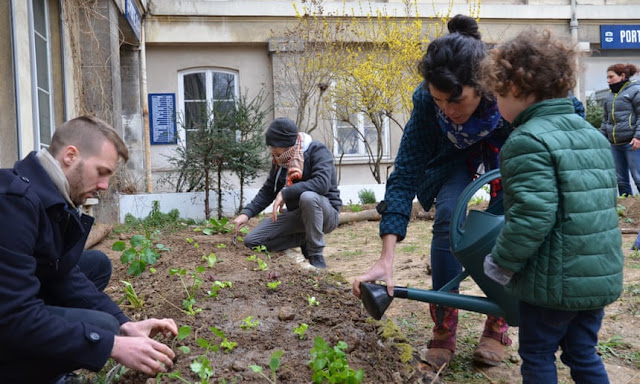 A community graden at Les Grands Voisins
The idea of loaning empty urban spaces to worthwhile causes is gaining ground elsewhere, with thriving projects in the Danish city of Aarhus and Philadelphia in the US, where it’s called “temporary urbanism”. However, in space-squeezed London, urban sites can remain empty for years, mainly because they have no obvious commercial potential or are waiting for permission to be developed.
The Centre for London found that an estimated 24,400 commercial properties in London are currently empty, with around half having been unused for more than two years. The total available vacant space, 6.5m sq metres, is equivalent to 27 times the footprint of Westfield London, Europe’s largest shopping centre. The majority of such places are owned by local authorities and developers. “Only one of 33 London borough councils publishes a database of vacant property and only one council keeps a list of groups interested in vacant spaces,” says Bosetti.
Bosetti thinks property owners could do more to match available sites with needy groups but says local authorities are afraid of squatters or allowing in destructive elements. “One of the main barriers to meanwhile use is the perception that hoarding a site is safer,” he says. “Often the opposite is true. Opening a site to a community and encouraging interaction with residents usually sees a reduction in antisocial activity.”
Squatting and vandalism are more likely if a building remains empty for too long, so one benefit of temporary tenants is the reduction in security costs. Another, according to Simon Hesketh, director of regeneration with the British developer U+I, is the connection a meanwhile space can forge with the community prior to redevelopment.
“We’ll try to organise events in temporary spaces for the widest cross-section of residents, to get their views and ask what they’d like and what works,” he says. “Not just to smooth the planning process, but because we can learn what we might include in our proposals.”

U+I, one of the sponsors of the Centre for London report, has already leased several sites awaiting redevelopment to small businesses and community organisations for temporary use. Hesketh acknowledges property owners worry about reclaiming the space when the tenancy ends but says everyone involved needs to be clear that the situation is temporary.
The Migration Museum in Lambeth is currently occupying part of the former engine workshop for the London fire service. “Having this site has been totally transformative for us,” says director Sophie Henderson. “It has allowed us to prove the concept of what we’re doing, while we look for a permanent home.”
The building is slated for redevelopment by U+I into a mixed-use scheme but is still going through the planning process. Until construction starts, the museum is one of several thriving community organisations granted the option to use it. “It’s been a tremendous gift,” says Henderson. “We couldn’t possibly have done what we have in the past year without it.”
Follow Guardian Cities on Twitter, Facebook and Instagram to join the discussion, and explore our archive here

The rise of the 'meanwhile space': how empty properties are finding second lives | Cities | The Guardian
.
.
.
Posted by Jeremy Woodward at 15:15