And things have been further muddied by the Brexit debate:
Futures Forum: Brexit: and cheap labour for the hospitality and care industries

One approach would be to get innovative and let the market do its thing:
Futures Forum: Creating/destroying jobs >>> Creative Destruction and Artificial Intelligence

Another would be to address the issue of young people who are Not in Employment, Education or Training - which has also been caught up in the Brexit debate:
Futures Forum: Brexit: and Neets

Which would mean 'there should be more training for [British] children':
Futures Forum: Brexit: and providing good quality jobs

Indeed, there have been some efforts made locally:
Futures Forum: Apprenticeships in Sidmouth

In the pro-Remain New European weekly paper, the notion of 'supporting and training British workers' is looked at in the context of Brexit:

The big lie is that there has been a big silence on immigration, I cannot think of any issue on which there has been so much noise, says Denis MacShane

I first stood for Parliament in 1974. Then the only story in town was immigration. Enoch Powell had set politics aflame with his argument that the mass arrival of non-British citizens was disruptive to settled British society.

The same arguments can be heard today as MPs of all parties blame the social fractures that are self-evident in much of Britain on the arrival of European citizens willing to work hard, often in sectors that could not find trained, skilled, or willing British citizens to do the work.

Britain gave up its responsibility to train people in vocational skills during the great de-industralisation of the 1980s. We produced financial not industrial engineers, men who could build hedge funds but could not lay a brick on a brick with precision, line up electrical conduits precisely and safely, or install the copper tubes to allow water or heating on demand in Victorian houses or jerry-built flats.

No EU prime minister can return home and tell his or her electorate that to appease the unyielding Hard Brexiters there is an agreement to allow Britain to begin discriminating against citizens of other partners and allies in Europe.

Instead, why not look at the British labour market rules, as fashioned by both Labour and the Tory-LibDem governments, which unfairly tilt the balance against British employees.

For example, free movement does not apply to work for government, nationally-owned industries or agencies. The NHS employs 57,000 EU citizens and they are welcome here. But might it be better to require investment to train sufficient doctors, nurses and other hospital staff?

Another way to support the domestic labour market is to insist on full training qualifications for many jobs. This again assumes that there is a structure of obligatory apprenticeships with a commitment to offer a job at the end of the training period.

When firms have to abide by industry-wide pay agreements negotiated with trade unions as in German-speaking Europe as well as most Nordic countries and the Netherlands it is harder to offer low- or minimum-pay jobs which do not sustain a family but which are attractive to men or women coming from countries where wages are far lower and jobs hard to come by.

Another mechanism would be to enforce rigorously those EU social rules like the posted workers directive and the agency workers’ directive. Low-pay employers have driven a coach and horses through these directives, to employ, at the lowest rates possible, workers from eastern Europe, delivered by gang-master style employment agencies, at the expense of local British workers.

Instead of some Labour MPs talking of work permits, an updated “Passport to Pimlico” for City bankers (but not baristas), or undefined “managed migration” it would be better to make the case for a more balanced internal labour market.


Already the EU was mulling over a so-called ‘emergency brake’ on access to welfare benefits for the first years of a EU citizen working in another country. Again there is little evidence that EU workers came or come to Britain to access benefits. It is, rather, the job offers that matter. But making official such an ‘emergency brake’ would ease fears, not only in Britain, about too rapid a mass arrival of foreign workers, especially in unskilled working class jobs.

Prime Minister May says she wants to see more fairness in the workplace. Measures to help British workers go with that agenda. Many firms will moan. They have to ask themselves if being excluded from the single market is a price worth paying if, as an alternative, the EU principle of non-discrimination on grounds of nationality can be made compatible with supporting and training British workers.

The Association of Employment and Learning Providers (AELP) would agree:

If the government wants to serve the needs of learners, employers and the economy, it need look no further than AELP’s submission ahead of the Autumn Statement

On the morning after the EU referendum, the Association of Employment and Learning Providers (AELP) issued a statement saying that the possible ending of free movement of labour underlined the need for the UK to develop more home-grown talent through skills training. Attending the Conservative Party conference, I heard the prime minister and home secretary say the same.

In fact, the government had been considering changes to the current system, but has changed its mind:
Sector welcomes apprenticeship funding 'U-turn' | News
Tories U-turn On Apprenticeship Cuts | Huffington Post

And across the board, there are calls to beef up the apprenticeship system:
GUEST BLOG: Why Apprenticeships offer a lifeline to the UK’s tech industry - ITWorks

Youth unemployment is a big problem throughout the Western world – not just in the UK.

The UK is a mid-table performer in this league – 21st out of a total of 35 countries. At the top of the league table is a group of northern European economies – Switzerland, Germany, Austria, Iceland, Norway, Denmark and the Netherlands.

So what can we learn from these better performing economies to improve the prospects of our young people in the world of work? Three key policy messages stand out from PwC’s research.

First, vocational education and training is of critical importance – a system where young workers benefit from classroom teaching to raise their skill levels while they are in the early phase of their careers. This approach works particularly well in Germany. In the UK we also have a long tradition of apprenticeships. However, our traditional apprenticeship system based on manufacturing industry was undermined in the 1970s and 1980s as the structure of the UK economy changed and traditional manufacturers cut back jobs and training opportunities.

However, there are big delivery challenges created by this shift in emphasis. Colleges of Further Education are crucial to delivering apprenticeships and other work-related training. There is a widespread perception in this sector that its contribution to education and training is not valued as highly as universities – and that the funding provided may not match the aspirations and targets set by politicians. 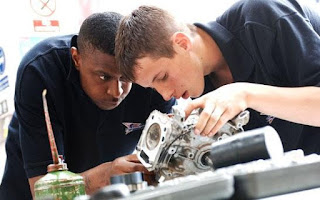 A second policy theme is to make sure that employers are engaged with young people and schools, so there is more familiarity with the world of work throughout the education system. This can include work experience, career advice, mentoring and community youth initiatives supported by business. In the early stages of their education, young people need to see the positive opportunities available in the business world – particularly in the dynamic areas linked to new technologies.

Third, we need to make sure that young people don’t drop out of the education and training system because they feel socially excluded and de-motivated. Wherever you grow up, you should have access to a good school with high aspirations and educational standards.

Alongside these positive messages, it is important to dispel a few myths about youth unemployment. One is that older workers are displacing young workers. This view is not supported by our PwC research. Economies which offer good opportunities to workers over 60 generally also perform well in terms of employment training opportunities for young people. These economies tend to have more flexible labour markets and a culture of training and development at all age levels.

Nor can we blame high immigration for youth unemployment, here in the UK or elsewhere. The countries which are ahead of the UK in the Young Workers Index – such as Germany, Nordic Countries and US/Canada – have also experienced high immigration. Immigration creates economic growth and economic activity which can benefit younger workers. The key issue is to make sure they are equipped to meet the challenge.

To finish, comment from the 'Apprentice':
The Apprentice: Claude Littner warns there is a lot to be concerned about by Brexit | TV & Radio | Showbiz & TV | Daily Express
.
.
.
Posted by Jeremy Woodward at 13:28