The Homecare Deficit: "An admission that 'care in the community' is failing miserably – at a time when care in community hospitals is being slashed beyond the bone."

The proposed cuts in hospital beds in Devon is to be taken up by 'care in the community':
Futures Forum: The future of Sidmouth's hospital >>> "Until we can absolutely ensure that we have got social care right, we should not look at unnecessarily closing community beds that some people will have to use."
Futures Forum: Hospital beds and social care: "The NHS will not be able to care properly for the growing population of frail older people unless the availability of social care increases in line with rising need."

It is local councils who are responsible for care in the home:
Funding care - Care and support guide - NHS Choices
Local authority funding for care costs – do you qualify? - Money Advice Service

However, in a report out today, it is clear that councils are increasingly unable to pay:
Older people's homecare at risk from £513 million UK deficit: UKHCA Media Statement

UKHCA exposes the under-resourcing of state-funded homecare using information obtained under Freedom of Information enquiries to all 211 councils in Great Britain and the Health and Social Care Trusts in Northern Ireland in a major report "The Homecare Deficit 2016" , along with a media release and infographics from the report. 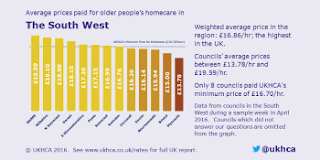 Our new report demonstrates the funding gap between what councils pay for homecare and the costs of services which must meet the National Living Wage. We reveal that the average price councils paid for homecare in the UK in April 2016 was just £14.58 per hour, compared to UKHCA's Minimum Price for Homecare of £16.70 per hour.

The rates that so many councils are paying independent and voluntary homecare providers illustrate the root cause of instability of local homecare markets and unacceptably low pay and conditions of the homecare workforce supplying care through contracts with councils and Health and Social Care Trusts.

The national press has reported extensively on it:
Councils aren't paying enough to cover the costs of home care for elderly patients | Daily Mail Online

And the East Devon Watch blog has commented on the report:

An admission that “care in the community” is failing miserably – at a time when care in community hospitals is being slashed beyond the bone.

This is the BBC's coverage:

Nine out of 10 councils in the UK are failing to pay realistic prices to support older and disabled people in their own homes, the industry says.
The UK Home Care Association calculated the minimum price councils should be paying was £16.70 per hour, but the average was over £2 less. Councils said they had been left with little choice given the squeeze on their finances by the government.
But the UKHCA said the situation was threatening the future of the market. It warned agencies were struggling to recruit staff and maintain quality, noting growing numbers of organisations were handing back contracts to councils.
It comes after the Care Quality Commission said earlier in the month the sector was at "tipping point" with cuts leading to more pressure on hospitals and deteriorating performance.

Council carer: 'You have to be clock-watching'


Kimberley Hassall works for Somerset Care, a social enterprise which provides home care for councils across the south of England. She says because of the pressures in the system, there is simply not enough time to do everything she wants to do, and so she has to prioritise things like medication.
"I do feel with some people you would want an extra half an hour just so you can put the washing on, change the bed or change their clothes." She says there is constant "juggling" to make sure she can see all her clients. "You have to be clock-watching," she added.
Her bosses agree. Currently 80% of the work Somerset Care does is council-funded, but it is looking to shift the balance much more towards private clients in the future as the agency feels it cannot maintain the quality of care with the fees being offered.
The home care market looks after nearly 900,000 people, providing help for daily tasks such as washing and dressing. About 80% are funded by local councils.
The UKHCA asked all 208 councils about the fees they paid, with 186 providing data under the Freedom of Information Act.
It bases its £16.70 minimum price on the cost of paying carers the national living wage and running costs for the businesses with a profit margin of 50p an hour. The average paid by councils was £14.58 an hour, with Sefton, South Tyneside, North Tyneside and Blackburn paying the least at under £12.
The average is higher than it was 18 months ago when the UKHCA last did this survey, but the number of councils not paying a "fair price" has increased because the rise has not kept pace with the increased costs that come from paying the national living wage, the UKHCA said.
Colin Angel, of the UKHCA, said another £500m needed to be invested in the market to bring the fees up to a sustainable level. "Underfunded home care is an urgent situation, which must not be allowed to continue," he added.
A Department of Health spokeswoman said the government was "committed" to providing high quality and dignified home care. She said money was coming into the sector through the Better Care Fund, which is largely funded by the NHS to encourage joint working between councils and the health service.
Local authorities have also been allowed to increase council tax by 2% a year this Parliament to pay for social care - although councils have claimed this is not enough to plug the shortfall in their care budgets because of the wider squeeze on their funding.
A Local Government Association spokesman added: "The market for publicly-funded care is simply not sustainable as it stands."