An exciting and unique project is happening in Exeter:


E-bikes are now available to rent from five docking sites across the city, with more coming soon
Exeter has become the first city in the UK to launch an electric bike scheme, which city officials hope will cut car use in favour of cleaner, healthier forms of transport.
The Co-Bikes scheme was launched last week by the team behind Co-Cars, a pay-as-you-go car-sharing club based in the South West, in collaboration with the Department of Transport, Devon County Council and Exeter City Council. It is expected to become a model for similar e-bike sharing schemes elsewhere in the country.
Mark Hodgson, managing director of Co-Bikes, said the scheme will change the way people travel in the city. "We all know that our cities are becoming more congested and spread-out, and a travel revolution is needed to help people more easily, quickly, enjoyably and affordably reach their business, study or leisure destinations," he said in a statement. "Electric bikes are the catalyst for this revolution and for an easy, enjoyable, electric Exeter. Because of their small footprint, they can easily be docked on the street by transport hubs, business and retail parks, and residential communities – helping people link up other transport options in the way that best suits them."
There are currently five docking stations around the hilly city of Exeter, including one at the train station, with three more due to be added in the next six months. Much like London's 'Boris Bike' scheme, riders can pick up and drop off their cycles at any docking station in the city.
City officials hope the extra power offered by the bikes' batteries will encourage higher cycling rates around the city, which is relatively hilly. Each bicycle has enough battery capacity to cover up to 60 miles with power assistance and can travel up to 15 miles per hour. Rides are priced at £1.50 per half hour, but the price drops to 75p per half-hour for members.
Alongside local and national government, the scheme is also backed by Great Western Railways and the University of Exeter.

With further coverage from the Express & Echo:

Exeter can claim a UK first today as the city’s groundbreaking on-street electric bike hire scheme launches.
Co-bikes aims to make getting around Exeter easy, enjoyable and affordable by conveniently linking up other forms of transport. The electric bike hire scheme is expected to be replicated in cities nationwide.
After a launch event at Exeter Central Station at 2pm on Thursday, October 13, users will be able to register on the Co-bikes website and download a smartphone app to enable them to hire electric bikes from docking stations across the city.
Initially 15 bikes will be available from three locations: Exeter Central Station, the University of Exeter’s Forum and Digby and Sowton Park and Ride.
Each dock has between four and eight bikes. More are due to be added as additional docking stations go live at the Civic Centre and County Hall later this year. By spring next year the scheme will be extended to eight sites in and around the city. 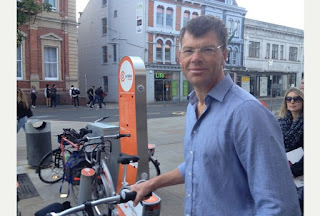 Mark Hodgson, Co-bikes MD
Co-bikes MD Mark Hodgson demonstrated how the system works for the Express & Echo on Wednesday ahead of the launch. He explained that while users are encouraged to take appropriate safety measures, helmets are not required by law and it is up to users whether they wish to wear one as they are not provided.
The scheme is designed to appeal to people who are not regular cyclists, so the power-assisted bikes mean zooming around town and climbing Exeter’s hills requires little physical exertion. There are seven gears to choose from, depending on how hard you want to pedal and whether or not you are going uphill. If no docking spaces are free when you want to drop off the bike, you can simply lock it to any fixed point within 30 metres of the hub.
Mark said: “After years of planning, we’re very excited to be launching Co-bikes in Exeter. The Co-bikes electric bikes are changing the way that people travel around the city and are affordable and easy as well as being great fun to ride. We all know that our cities are becoming more congested and spread-out, and a travel revolution is needed to help people more easily, quickly, enjoyably and affordably reach their business, study or leisure destinations.
“Electric bikes are the catalyst for this revolution and for an easy, enjoyable, electric Exeter. Because of their small footprint, they can easily be docked on the street by transport hubs, business and retail parks, and residential communities – helping people link up other transport options in the way that best suits them.”
Co-bikes is the first city-wide network of electric bikes for self-service hire from on-street docking stations. Riders can hire, ride and drop the bikes off at any Co-bikes site – much like London’s ‘Boris Bike’ concept but with electric bikes.
The scheme is the brainchild of the team behind Exeter-based Co-cars, the fastest-growing hire-by-the-hour car club in the South West, with cars available across Exeter, Salisbury, Dorchester, Barnstaple and other towns.
While the bikes are available for hire by anyone on spec, Co-bikes also offers joint membership with Co-cars. A single smart card will give members access to all of the bikes and cars under the Co-bikes/Co-cars umbrella. This is the first one-card membership scheme for car and bike hire in the UK. 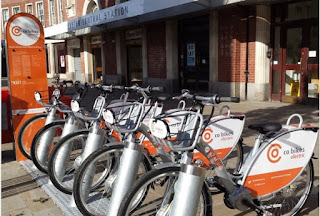 Co-bikes is also the first UK electric bike member of the fast-growing global nextbike network, which has normal UK bike share schemes in Bath, Milton Keynes, Coventry, Belfast, Stirling Glasgow and in over 100 locations worldwide. This will give Co-bikes members automatic access to bikes at cities across the UK and overseas.
The e-bikes can be hired and returned to any docking station on the Co-bikes network. Like its sister company Co-cars, Co-bikes are hired on a pay-as-you-go basis.
People can hire the bikes on spec, or become a joint member of both organisations to gain discounts on both bike and car hire. Prices start from 75p per 30 minutes for members and £1.50 for 30 minutes for non-members.
The initiative has been launched with support from the Department for Transport, Bikeplus, Devon County Council, Great Western Railway, the University of Exeter and Exeter City Council. Devon County Council has helped fund the scheme.
Councillor Stuart Hughes, Devon’s cabinet member for highway management, said: “We’re pleased to have been able to help Co-bikes make this groundbreaking scheme in Exeter a reality. “The Co-bikes provide a truly sustainable travel choice that makes it easy to get around the city, and opens up the option of travelling by bike to more people.
“The initiative complements the county council’s infrastructure improvements, such as the new rail stations in and around Exeter as part of the Devon Metro, to help tackle congestion and support economic growth.”
For more details and to sign up for Co-bikes, visit co-bikes.co.uk or call 020 8166 9851.