On the River Otter: beavers, nature tourism and rewilding

The Beavers on the Otter seem to be doing very well since their official release earlier this year:
Futures Forum: On the River Otter: releasing beavers as part of the DWT's "groundbreaking project"

Not everyone loves the beaver:
Eccentric baronet offers £1,000 reward to kill beavers on his estate because they are 'devouring' his trees - Telegraph

But the general public are very taken by the creatures, as reported across the national and international media:
Captivating pictures show they're back in our rivers - and DAM good at breeding: It's the beaver baby boom!   | Daily Mail Online
Reduce flood-risk through rewilding, says new report from Rewilding Britain - The Ecologist
UK′s most talented architects are not human | Global Ideas | DW.COM | 04.10.2016
How beavers will transform the UK, AsiaOne World News

With a piece from the latest Herald: 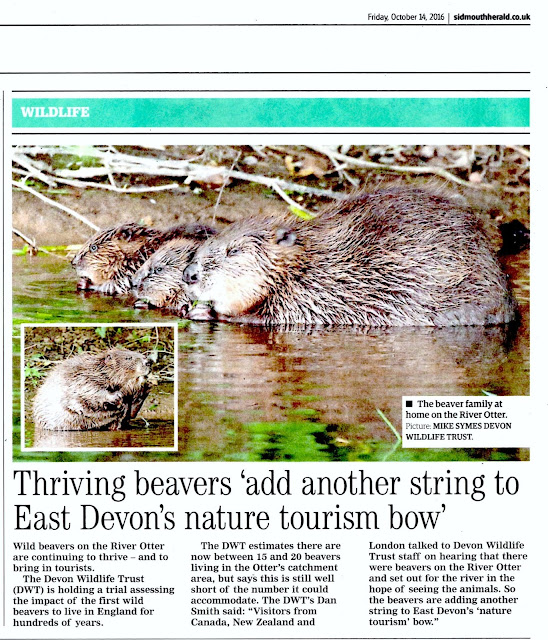 This is very much part of the general 'rewilding' movement:
Futures Forum: Rewilding and rural communities: "The only reasonable argument to pay farmers £3bn in subsidies is ecological restoration."

With this piece from the Guardian earlier this year: