Making millions on 'high-quality specialist retirement accommodation' in Sidmouth, rather than spending on S106 cash for affordable housing

How useful is the S106, now the Community Infrastructure Levy, at actually providing funding for 'affordable housing' from developers?

In Sidmouth, there are doubts:
Futures Forum: Fortfield Hotel ... to ... Sanditon apartments ... to S106 cash
Futures Forum: Knowle Relocation Project: How to classify the proposed development: as C3 housing or as C2 care home?

And across the South-West not much seems to be forthcoming:
Futures Forum: "Not a single home that could be described as "affordable" within government guidelines is being built, or is for sale, anywhere in Cornwall."

The Town Council's planning committee has reacted very angrily to proposals for large-scale development - with very little on offer for 'affordable housing': 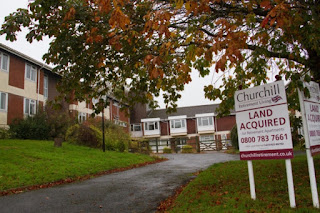 Civic leaders have slammed a developer’s ‘insulting’ offer of just £41,000 towards ‘affordable’ housing - when it stands to make millions building on the site of a former Sidmouth care home.


Town councillors have reiterated their opposition to Churchill Retirement Living’s plans to demolish Green Close, in Drakes Avenue, and build 36 sheltered housing apartments for the elderly.
They said the housing stock for older people cannot keep growing without also creating homes for nurses and carers to look after them – and argued the developer could cut into its 30 per cent operating profit margin to pay for it.
Planning committee members suggested Churchill should pay at least £360,000.
Councillor Ian Barlow, committee chairman, told the Herald: “Churchill’s profit margin is the one of the highest in the industry.
“They say they can’t pay more than £41,000 or it won’t be profitable – but those 36 homes are probably going to be worth £6-7million.
“Churchill is making a profit and taking it out of the town. They’re bringing in older people who will use the facilities, but they’re barely putting anything into the pot.”
The £41,000 referred to is a ‘section 106’ payment – cash that is meant to mitigate the impact of developments and fund improvements such as ‘affordable’ housing. The contribution depends on factors such as the size and number of dwellings being built.
Churchill is proposing to build 36 apartments in place of the 23-bed Green Close care home, which was run by Devon County Council until cutbacks brought about its closure in 2014.
The planning committee, which met last week, ruled: “Members noted that a contribution of £41,208 had been offered by the applicant towards affordable housing. Members expressed the view that this was an insult to the community of Sidmouth and urged the local planning authority not to accept the offer.”
Cllr Barlow compared the Green Close proposal with the Sanditon development, on the plot of the former Fortfield Hotel.
The developer there built 29 apartments and made a £1.5million ‘section 106’ payment – 36 times what Churchill is offering.
Cllr Barlow said the firm can avoid a larger payment because it is creating sheltered housing, adding: “We’re concerned that a lot of places are being provided for the elderly, but there’s nowhere being built for younger people.
“If there’s no provision at the same time for a nurse or a carer to live, who is going to look after them?”
Churchill’s planning director, Andrew Burgess, told the Herald: “We are disappointed by Sidmouth Town Council’s decision, since we have been consulting the community and working with the planning authorities for several months to develop plans for an attractive and sustainable new retirement community that will bring benefits to local people and the local economy.”
He said the proposed affordable housing contribution is based on a detailed viability assessment, industry best practice and factors such as the market value of the site.
Mr Burgess added: “We will continue to work with the council and the local community to ensure we can deliver the high-quality specialist retirement accommodation that is urgently needed by older people in Sidmouth.”
The application has been recommended for approval by EDDC’s planning officers, who noted the ‘comparatively modest’ financial contribution.
The authority’s development management committee will decide its fate on Tuesday (November 1).