Cities can ease the pressure on the countryside >>> "Instead of building new houses in greenfield sites, we want to see local councils putting pressure on housebuilders to support urban regeneration"

How can towns and cites and towns improve on the planning system?
Futures Forum: Community Voice on Planning: National Conference report >>> exploring the mess that is the current planning system

One idea might be to revisit the 'garden city/town':
Futures Forum: Green cities, garden cities @ Radio 4

The Rural Services Network reports on the latest ideas from the CPRE:


Cities can ease pressure on countryside

MORE attractive towns and cities would ease development pressure on the countryside, say rural campaigners.
Housing should be developed alongside transport infrastructure for economic, social and environmental benefits, says the Campaign to Protect Rural England (CPRE).
The charity argues that high-density development near to high-quality public transport services could boost businesses and jobs.
It also calls for more well-designed homes and more diverse, exciting communities, arguing that they would reduce pressure on the Green Belt and the wider countryside.
The recommendations are made in CPRE's 'Making the Link' paper which, it says, builds on emerging government thinking.
CPRE policy adviser Trinley Walker said: "To build the homes we need and make our towns attractive for residents and businesses, housing development and transport must go hand in hand.
"Good access to public transport should be an important factor when councils make decisions about where to build houses – yet it often gets side-lined.
"This means that in many towns the potential for regeneration, quality housing and better connected communities is missed."
The paper highlights the government's recent NPPF consultation identified 680 commuter hubs suitable for high density development.
It argues that attention can also be given to smaller places like market towns, which delivering connectivity, services, employment and business opportunities for rural communities.
Situating high-density housing near transport hubs can concentrate development on brownfield sites in need of regeneration and increase connectivity to employment centres, says the paper.
This has the potential to make towns more attractive for residents and business, halt damaging urban sprawl and reduce car use and road congestion, it argues.
The paper suggests a number of options to encourage such development.
These include reduced business rates for local businesses and the roll-out of planning tools to help identify suitable locations for development.
The paper calls for higher-density development based around public transport hubs, planned around local services and waking and cycling.
High density development needn't mean tower blocks in market towns, it says.
Terraced housing and mansion blocks can provide high density homes and preserve the unique character of towns, the paper argues.
'Making the Link' is the sixth paper in CPRE's Housing Foresight series, which aims to provide innovative policy solutions to critical housing issues.

Here is what the CPRE has to say:


Our countryside is vanishing under new housing 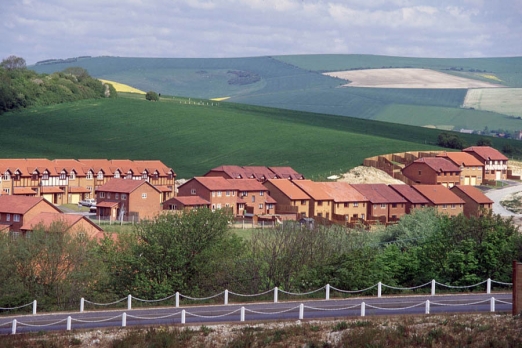 Everyone needs a place to live, but the way in which this is being done means that urban sprawl is nibbling away at the green spaces across England. Housebuilding covers more countryside than any other kind of development.
Successive governments have made new housebuilding a priority. Local councils are being offered financial incentives in return for permitting new developments.
Housebuilding means climate-changing greenhouse gas emissions, increased road traffic and congestion, more strain on water sources, and increased quarrying in the countryside. We are losing the tranquillity from green open spaces, fields and woodland – and the pressure to build more houses will only increase this.

Our viewWe want to stop this increasing urban sprawl into the countryside. We believe that there are many other ways in which people across England can be housed properly.Instead of building new houses in greenfield sites, we want to see local councils putting pressure on housebuilders to support urban regeneration, so that people have greater options for homes in thriving, pleasant communities without moving out of town. Where new houses do need to be built, developers should be making a lot more use of ‘brownfield’ sites, which have already been developed in the past.

Posted by Jeremy Woodward at 02:51