Plans for Port Royal: anticipating a Regeneration Board >>> and 'scaremongering' over including the Ham in the Scoping Study

Last week's Town Council meeting discussed the 'scaremongering' that has been taking place over what's going to happen at Port Royal:
Futures Forum: Plans for Port Royal: anticipating a Regeneration Board >>> and 'scaremongering' over land-swapping at the Ham

Sir
With regard to the letter from Councillor Turner I feel I must defend myself, and by extension Councillor Booth who responded to me. The responses from both Councillors have been very helpful in helping understand how members of the Town Council view things.It is upsetting for Councillor Turner to accuse me of rumour-mongering and scare-mongering when my fears had been raised by the inclusion of a picture of the northern end of the Ham in their Project Brief for the Scoping Study.

[Photographs reproduced below from the Project Brief; the 'northern end of the Ham' is in the bottom right: @ Agenda_STC-050916.pdf] 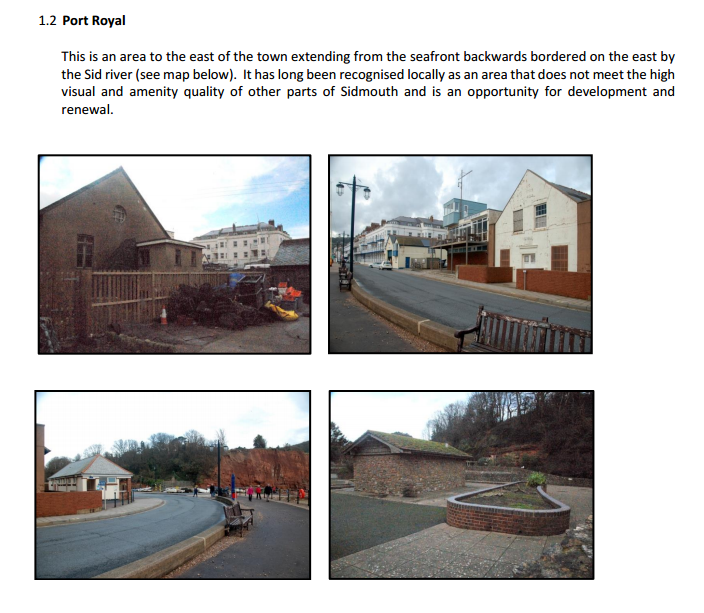 I am at a loss to understand why that photograph was included if there is no chance of the land being up for redevelopment.

[Map reproduced below from the Project Brief for the Scoping Study; this includes the Ham as 'Recreation Ground': @ Agenda_STC-050916.pdf] 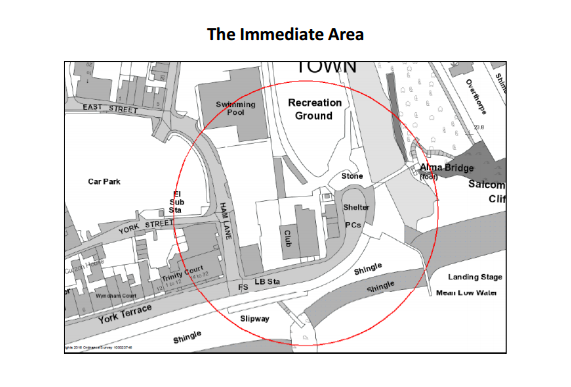 I am very heartened by Councillor Turner’s statement that he would ‘chuck out’ any proposal to include the Ham (by this I assume he means any area included in the Ham Conveyance of 1896 ) but question why, in that case, he and the other councillors didn’t demand the Project Brief be redrafted and the picture removed.

If anyone can be accused of causing alarm, or starting scares or rumours, it is Sidmouth Town Council and East Devon District Council who both approved the inclusion of this photograph in a document which is to be supplied to companies tendering for the work of assessing the scope of the area to be redeveloped!

Has this unaltered document has been sent out to interested companies? When will we be allowed to see the map which is to accompany the Project Brief?

The photograph referred to shows the pumping station operated by South West Water - which is situated in the former 'boat park' in the very northern part of the Ham - as illustrated here: 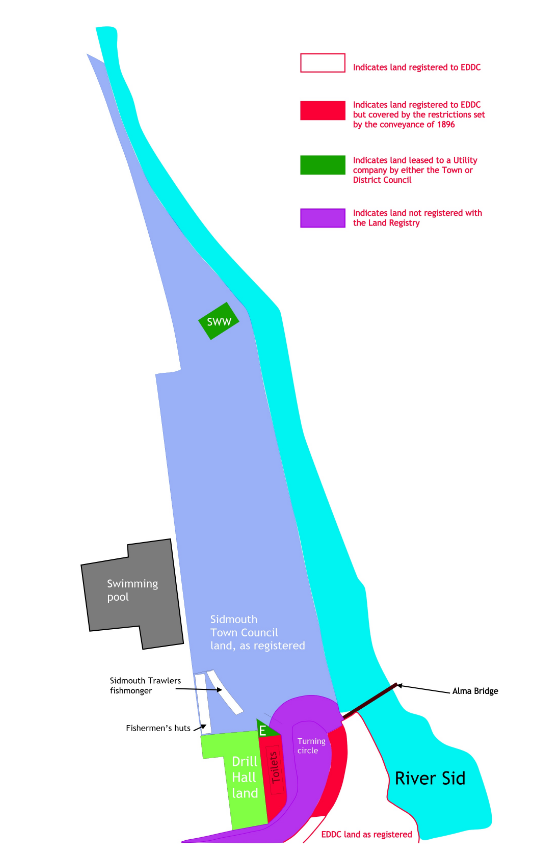