This is from today's letters pages in the Mail: 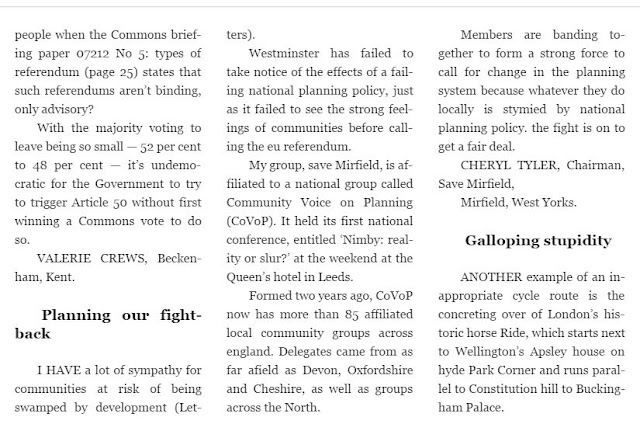 With a report from the conference on the CoVoP site:

The National Conference took place in Leeds in October and attracted many delegates from Yorshire and Cheshire as well as those from further south as as far away as Devon.

To answer the headline NIMBY – reality or slur?

There are people who just don’t want anything built near them; we doesn’t represent those people, we want to see the sustainable development in the right places. Most communities aren’t anti-development – they’re anti-bad development, and rightly so. The main cause of NIMBYism is bad development in the wrong place, so if we want to reduce NIMBYism we need to start building the houses people need and want to live in, in sustainable places. That means building the right types of homes in the right places, and they must be affordable to the people who need them. The government is failing to do this, and in fact most of its housing initiatives are boosting the demand without addressing supply.

The total Objectively Assessed Need across the country comes to much more than the 200,000 homes per year advocated by the government and targets should be realistic not aspirational if 5 year land supply figures can be achieved and development planned effectively.

Community Voice on Planning | A National Alliance to provide communities with an effective voice on planning, enabling them to protect their greenfield and green spaces.

And a report out today from the East Devon Watch site:

“Community Voice on Planning (CoVoP) held its first National Conference “NIMBY, reality or slur?” recently at the Queen’s Hotel in Leeds. Formed just over 2 years ago, CoVoP has more than 85 affiliated local community groups across England, including over 20 in the South West. Members are banding together to form a strong cohesive force to fight for changes in the planning system.

Delegates from all over England attended, from as far afield as Devon, Oxfordshire, Cheshire and Yorkshire. Speakers included representatives from the Campaign for Protection of Rural England (CPRE), the Town and Country Planning Association, Beckett University Leeds and CoVoP. Land banking, loss of greenbelt and the flawed methodology for predicting housing requirements were among the topics covered.

Three local MPs, Paula Sheriff, Jason McCartney and Greg Mulholland attended and as a panel, they answered questions from the floor. They were subjected to some fairly stringent questioning as members of CoVoP have felt very frustrated by the lack of community involvement in the planning process and by the perception that Parliament tends to ignore their views until an election is pending. Delegates agreed that with an appeal-led planning system for the largest housing sites now in place, the National Planning Policy Framework has totally failed to deliver the housing that is needed, of the right type and in the right places.

Cheryl Tyler of SAVE MIRFIELD said “ It is well understood that the larger developers prefer to build on virgin green belt land. Some of this will be prime agricultural land that the country can ill afford to lose. In the National Planning Policy Framework, building on green belt should only be under “special circumstances”. When this type of land is used the costs of new infrastructure needed largely falls on the public purse. It would be interesting to see how much more this costs us than building on brownfield first.

Over the whole country there is a real problem with land-banking. This puts up land prices and reduces the number of homes actually built. What happens then is more land is required and so the cycle continues.”