'Independent workers' and the 'gig economy'

This is part of the 'gig economy':
Futures Forum: The sharing economy >>> “This on-demand, or so-called gig, economy is creating exciting economies and unleashing innovation. But it is also raising hard questions about workplace protections and what a good job will look like in the future.

Here's the view from Salon.com:

What if millions of American workers were being denied health insurance, job security and the most basic legal protections, from overtime pay to workers compensation to the right to join a union? What if tens of billions of dollars in taxpayer revenues — money desperately needed to address everything from crumbling roads to education to health care — were never making it to local, state and federal treasuries? What if thousands of companies were violating the law with impunity? 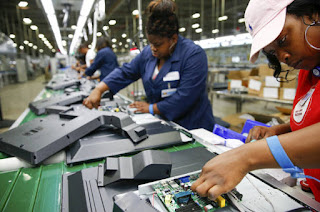 That is exactly what is happening in the United States today, thanks to a rampant practice known as worker misclassification — illegally labeling workers as independent contractors when in fact they are employees under the law. In some cases it’s occurring in plain sight, in others it’s more hidden — but regardless of the circumstances, it is taking an enormous toll on the country.

According to the Economic Policy Institute (EPI), workers misclassified as independent contractors can be found in nearly every industry, and the phenomenon has grown considerably with the rise of the gig economy. Uber, the ride-hailing company, has become the poster child for worker misclassification, with numerous lawsuits alleging that Uber wrongly classifies its drivers as independent contractors. But Uber is hardly alone — examples of worker misclassification can be found in scores of new sectors, from housecleaners to technical workers. 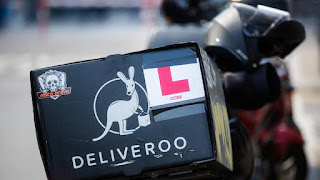 Between 20 and 30 per cent of people in the US and Europe are working independently in the so-called “gig economy” according to a new study that counts moonlighters as well as full-timers.

The survey of 8,000 working-age adults by the McKinsey Global Institute suggests that the phenomenon of independent work — at least on the definition the researchers have chosen — is more widespread than official data suggest.

It also finds that while most people are happy to be “gigging”, a substantial minority of about 30 per cent are doing it as a last resort. Poorer households are more likely than richer ones to participate in independent work — and to be doing it for lack of better options.

This underscores the fact that underemployment and low wages still bedevil economies like the US and UK, even though their official unemployment rates are low at 5 and 4.9 per cent, respectively.

A fierce debate has broken out this year about the dangers and opportunities of a world where more workers are cobbling together an income through independent “gigs” rather than relying on traditional employee jobs.

Advocates say this style of work allows more people to participate in the labour market, giving them the flexibility they want. Critics say employers are offloading risk on to “independent” workers who do not enjoy employee protections such as the minimum wage or sick pay.

The debate over the “gig economy” is complicated by the fact that there is no agreed definition of what exactly it is.

McKinsey’s researchers defined “independent workers” as people who chose when to work, had multiple employers and could move between jobs fluidly. The researchers included people on temporary contracts of less than a year, so long as they were not “permatemps” who were effectively working like employees but on rolling short-term contracts.

Not everyone will agree with this definition. Temp agencies, in particular, are privately furious when people lump them into definitions of the “gig economy”, since they usually employ the temps themselves and provide them with employee rights and benefits.

And there is the whole 'culture' around the 'P2P economy':
Futures Forum: The sharing economy >>> “A lot of people want to do the right thing but they are struggling because the systems and culture aren’t right. Companies and governments have got a big role to play in doing that.”

To finish, here's the view from the Foundation for Economic Education:


The Independent Workforce Is Taking Over

The days are long past when a person worked from 9 to 5 at the same company for the entirety of their working lives. The ways people earn money are changing, and understanding these new dynamics is key to developing a policy environment that allows new business models and innovations to thrive. A new survey from the McKinsey Global Institute sheds some welcome light on this issue, and in addition to helping to answer who is in the growing independent workforce, they help explain how and why these people participate.

Researchers surveyed roughly 8,000 people from the United States and some European. They excluded what they call “fissured workers” or the people involved when companies use vendors or subcontractors to fulfill non-core functions like technical support or security, because these individuals “are expected to keep regular work schedules with little autonomy, and they have a continuous relationship with their employer.”

Segmentation of Independent Workers in the United States: 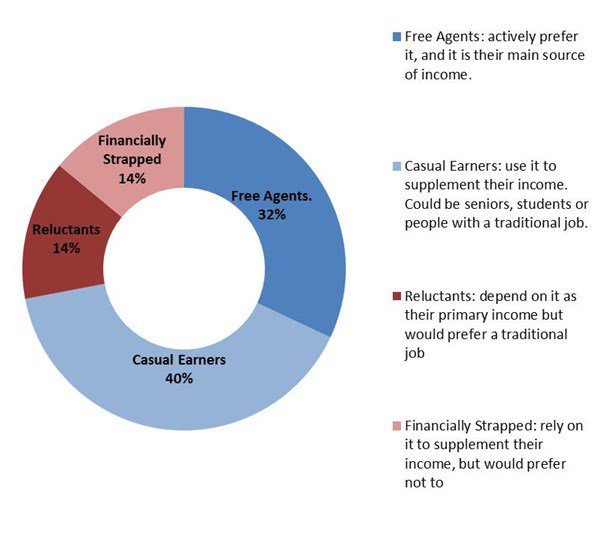 The largest segments in the U.S. are the casual earners and the free agents accounting for 72 percent of the total, which the McKinsey team dubs as participating “by choice” as opposed to “by necessity.” They enjoy being able to take advantage of the new options in independent work, and might be attracted to the autonomy and flexibility that it offers relative to a traditional job. The “free agents” who choose these non-traditional ways to earn, report higher satisfaction that those who choose traditional jobs on 12 of 14 measures, and are equally satisfied when it comes to income security and benefits like health care. They report being more engaged in work, enjoy having control over hours, and the opportunities for learning, among other aspects. Casual earners who use independent work to supplement their other income also report higher satisfaction compared to people in traditional jobs by choice in things like independence, work atmosphere, and flexibility...

Some of the recent growth in the independent workforce has been the rise of new digital platforms, and the authors suggest developments in that sphere could further transform the market for independent work by allowing for larger scales, richer information signals, and lower barriers to entry for new participants.

We don’t know what the future of work will look like, but we do know it won’t look the same as it did last century. Our public policies were designed to function in the traditional labor market, and many of them are misguided or already have serious flaws. With these new developments, they are also at risk of becoming increasingly out of date.

This first appeared at Cato at Liberty.


The Independent Workforce Is Taking Over | Foundation for Economic Education