Who should pay for the building and upkeep of roads?
Futures Forum: Subsidies and social engineering: or why we build roads.
Center for a Stateless Society » But Who Will Build the Roads?

It's a question which is being asked by a Presidential candidate, who laments an America where “our roads and bridges are falling apart”, while striving tirelessly to avoid paying for one pothole to be mended:
A free market in tax is a groteseque reality | Nick Cohen | Opinion | The Guardian

It's a question being asked in these parts too:
Futures Forum: Investing in roads in East Devon: who pays ... and who benefits?

You could ask for sponsorship:
Futures Forum: Getting potholes filled: and asking multinational companies to pay their fair share of tax to make it possible

You could reduce the wear and tear on roads:
Futures Forum: Councils, 'take note'! >>> “The future could be one where bikes rule the road, just as they did in the 1890s."

Or you could get members of the public to look after their roads - which could be seen in rather different, and somewhat brutal terms:

While some would still argue that a more prominent role for the third sector is a good thing, by ‘bridging the gap’ between the state and the market and between the government and society, there is sufficient evidence to suggest that this “institutional fix”, as some commentators have described it, has enabled the state to protect its legitimacy and maintain its control, while avoiding responsibility and cutting costs under the guises of ‘flexibility’ and ‘innovation’.

What’s more, this steady encroach by government on voluntary and community organisations, through such mechanisms as government contracts and partnerships, has managed to ‘professionalise’ many of these organisations, with all the usual political side effects: closing down any scope for real, radical change or state-critical thought, much like the corporate philanthropy of big foundations has done with other organisations and social movements.

Jennifer Wolch calls this “para-state apparatus” that carries out welfare state functions the “shadow state”, while others have dubbed the process the “voluntary” or “community turn.”

The Daily Mail has been asking similar questions:


By THOMAS BURROWS FOR MAILONLINE 6 October 2016

A cash-strapped council is training members of the public to fill in potholes it cannot afford to mend itself. Devon County Council wants to create an army of volunteers to fill in holes in what is believed to be the first of its kind in the country.

Residents are given two days of training and supplied with equipment and materials as part of the 'Dig-It-Yourself scheme supported by the government. A pilot scheme across five parishes proved such a success they now plan to roll it out across the whole of Devon. 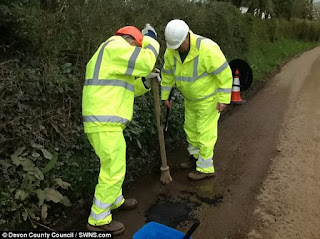 Devon has the largest road network of any highway authority in Britain - which costs the council £60m-a-year to maintain. They came up with the idea for using residents to fill in potholes after a £21m shortfall in funding this year. The volunteers have repaired almost 200 potholes and the council said they are all still intact.

Officials are now expanding the scheme to other areas of Devon and has pledged a further £100,000 to it.

Volunteer Barry Thrussell, 69, said: 'During the pilot scheme I filled in 25 potholes. I got involved to keep the roads in a good condition and it saves a big bill.'

But he said training residents was not the a long-term solution.

He said: 'Provided you've got people who are community conscious it's a way forward but I wouldn't say it's the ideal way forward to maintain the standard of the roads. In an ideal world the council would have a sizeable budget and keep the teams they used to have to keep that strength of workforce.'

County councillor Stuart Hughes, who is the county's Cabinet Member for Highway Management, said: 'The results have been impressive. Minor pothole repairs have been successfully trialled by our Community Road Wardens in a number of pilot areas across the county.

'I'm pleased that we've had chance to make sure the system is tried and tested and I'm sure other wardens across the county will now want to take up the opportunity to carry out similar work. The Instarmac material has worked extremely well and all of the wardens have found it easy to use.'

He added: 'The Road Warden scheme came from requests from local Councils asking to be allowed to do more, as we're unable to do as much of the minor work as we continue to face budget reductions from central Government. The Community Road Wardens compliments our highway maintenance service by providing flexible support which enables communities to deliver their own priority needs.' 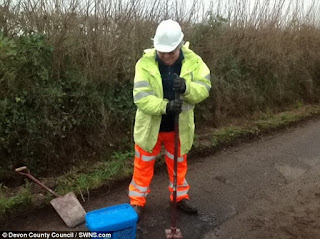 The Department For Transport said they welcomed the scheme.

A spokesman said: 'We support councils that develop innovative ways to fix roads that are appropriate for their area, and provide value for the taxpayer. We will continue to monitor Devon County Council's Community Road Warden project.

'Well-maintained roads help deliver better journeys and get people around. We are giving councils across England £6 billion over this parliament to improve highways in their area and are also providing £250 million specifically to tackle the blight of potholes.

The Local Government Association said a number of other local highway authorities are now considering rolling out similar schemes of their own.