In just over a month, we'll be having elections for the County Council:

Devon County Council elections - all you need to know
By WMN_PGoodwin | Posted: March 23, 2017 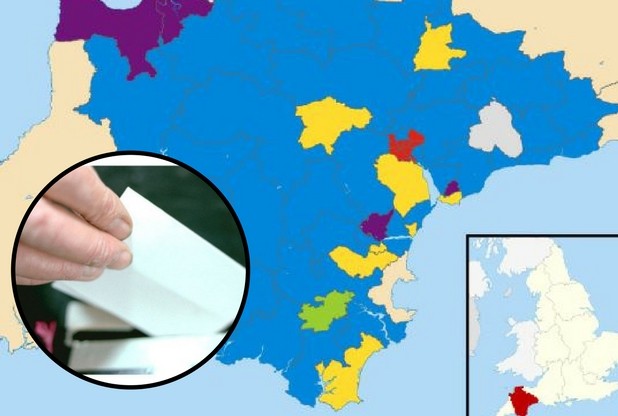 The whole county goes to the polls in May

The countdown has begun to a countywide election on May 4.

On Monday, Devon County Council will publish its notice of election, firing the starting gun on the county poll.

Candidates will vye for 60 seats on the council, currently dominated by the Conservatives.

Just over a week later, on April 4, is the last date for nominations. Voter registration closes on April 13 with the closing date for postal votes on April 18. A week later, publication of Notice of Poll takes place on Tuesday April 25.

The polls open at 8am on Thursday, May 4, closing at 10pm with the results announced the next day, Friday.

Labour and the Lib Dems face an uphill task to overturn the large Conservative majority. Four years ago, the Tories won 38 seats to the Lib Dems' 10 with Labour returning seven seats, followed by UKIP with four and three independent candidates. This time there will be two fewer councillors with 56 single-member electoral divisions and two two-member divisions.

At the close of polling, ballot boxes will be secured overnight, the votes having first been sorted and verified and the votes being returned to boxes and resealed. Verification of the votes will take place immediately after the polls have closed in each of the city, borough and/or district council areas.

As in previous elections, counting of the Votes will not begin until the Friday May 5 – all taking place at the same time, starting at 10am and declared by around midday.

And the County website is urging electors to register:
Elections 2017 | Democracy in Devon
Call for East Devon residents to register to vote - News - Sidmouth Herald

Elections are also happening across the border:

The 2017 local elections: time to bury councillors, or to praise them?

Posted on December 12, 2016by bwdeacon
We are now less than five months away from one of our infrequent four-yearly opportunities to express our democratic view of Cornwall Council. As the Council’s leadership desperately clings on to the tiger of housing growth, no doubt people will be asking themselves as local elections near, ‘what have councillors ever done for us?’ Others won’t ask; they’ll be loudly calling down a plague on all of them.
This may be a bit blunt. I’m sure most councillors believe they’re doing their best for Cornwall and its communities and are not, as so many assure me, in the pay of upcountry developers and determined to transform our land into a Little England by the Sea as quickly as possible. The more proper question therefore becomes ‘why have councillors been unable to raise credible opposition to population growth policies and developer-led planning?’

Linden Homes advertise Lifestyle Cornwall for some
While not actually wishing to bury councillors, it’s surely time to remind some of them of a few home truths. Many councillors are clearly beyond redemption, uncritically swallowing wholesale the advice of their officers, kowtowing to London’s orders with scarcely a whimper, or perhaps not possessing the wit or wisdom to challenge conventional ‘mainstream’ policies. It’s the others I worry about.
Over the past month or so I’ve heard from three Cornwall Councillors (from different party groups), all genuinely concerned for the future of their land, all deeply worried by the lemming-like drive for massive building projects and renewed people-led growth that threatens to transform the landscapes around our towns and villages. Yet none of them seemed to have discussed their concerns much with fellow councillors across party lines who might share their views. None seemed fully aware of campaigns outside their particular patch. Intra-councillor communication is one problem, while external communication is the second.

Exciting urban extensions for others
Why are councillors unwilling to take a lead and organise? Why can’t those who rightly question the Council’s direction of travel forget their party labels and coordinate their opposition? Instead of moaning about the constraints imposed by central government, constraints that are all too real, why don’t they do more to publicise their dilemma? Is it not possible to oppose central government diktats publicly, while educating Cornish voters about the straitjacket the Government imposes? Can’t they do more to point out how the Council’s leadership complies too readily with those diktats?
At MK’s recent Annual Conference for example, their councillors admitted that they ‘did too much without shouting about it’. So why not do more to shout about it? First, they could surely make more effort to publicise what they’re doing. Second, they could pro-actively disseminate information they come across that illustrates the absurdities of the current Council strategy or the various ways in which Cornwall is being treated unfairly. Look at the MK website and you’ll find surprisingly little such information.
Surely MK and other councillors could build more bridges to campaign groups and campaigners outside, who can then spread this information through the grassroots. There’s a huge amount of energy and anger building up in local campaign groups as people see the changes unfolding around them and begin to realise what the elites have in store for us. But there’s also a lot of confusion and ignorance as well as anger.

Can councillors understand the consequences of their strategy?
The danger is that people take a blanket view and blame ‘the council’ and all councillors for what’s happening. We’ve seen over the past year where this can lead, if left to stew unfocused in this way. People will vote for the first demagogue that comes along. They end up protesting against the establishment by electing slightly more marginal members of the same establishment, some just chancers and others who deliberately fan anger and fear into racism and bigotry and offer simplistic solutions but no substantial remedy for a system that’s unfit for purpose.
To prevent that, we need a grassroots populism, also anti-elitist, but confident in its ability to replace the failed elites, not with a set of chancers from similar backgrounds but with genuine and credible voices of localism and community democracy.
Councillors who can see through the Council’s corporate agenda need to stand up, join with campaigners and begin to discuss how to make the future of Cornwall an issue in next year’s local elections. We can’t let things go on the way they are. So how do we best challenge the people-led growth consensus that grips our policy-makers and replace it with a more sustainable vision of Cornwall? Who’ll make the first move?