There are all sorts of questions being posed as to what exactly this means:
Futures Forum: Greater Exeter forges ahead as "the epicentre of the Heart of the South West Local Enterprise Partnership"

This is the view from Mid Devon: 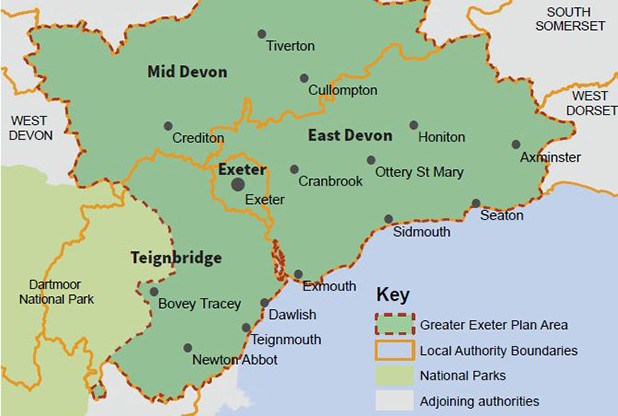 Greater Exeter Strategic Plan
Plans to create a Greater Exeter Strategic Plan have raised fears that councils are "sleepwalking" into becoming unitary authorities.
Mid Devon, East Devon, Teignbridge and Exeter City councils, in partnership with Devon County Council have teamed up to write the Greater Exeter Strategic Plan (GESP) which looks forward to 2040.
The plan will address the future housing needs across the area, ensuring enough is built of the correct type and at the right locations to suit people's budgets. It aims to help communities to thrive, jobs and infrastructure is also required, but it's also recognised that each area has special environmental qualities which need protecting and enhancing so it remains a great place to live, work and visit.
The GESP will sit above District-level Local and community Neighbourhood Plans, taking a long-term strategic view to ensure important decisions about development and investment are coordinated.
Its purpose is to establish an aspirational and joined-up vision for the area to:
Meet the area's housing needs in the right locations
Secure economic growth and increased prosperity
Provide transport and infrastructure improvements needed to support sustainable growth
Safeguard and enhance the environmental assets of the area
There is also a 'call for sites' process running alongside the consultation, providing the opportunity for individuals or organisations to put forward suggestions for areas that may have the potential for future development. 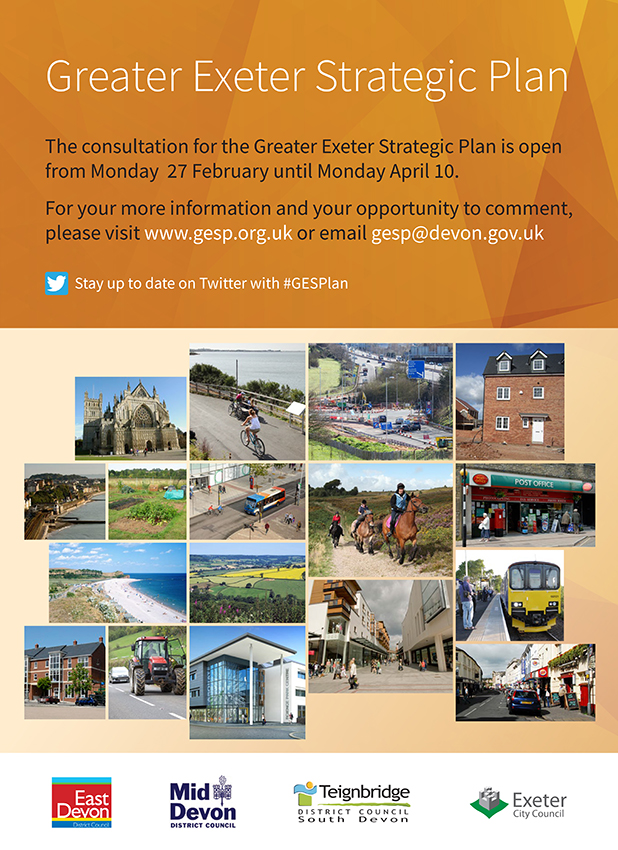 She said: "We're looking like we could be ceding power to this planning partnership, and I know people will shake their heads and say no, but there are several points which worry me.

"Exeter needs land and you can imagine where I sit in my ward, Exeter City Council could be looking at developing the swathe of land that is between Silverton and Exeter and similarly between Thorverton and Newton St Cyres. If you look at the East Devon side there are huge estates marching across that land, so this worries me.

"It worries me that it's being done by degree and almost by stealth. When we went to the public to talk about the sort of governance the district wanted, they didn't like the cabinet, but unfortunately we didn't get the 3000 signatures we needed in that period of time.

"I've seen this happen before and I would really like to know that the very least we would do is have a state of the district debate on this Greater Strategic Exeter Plan."

Councillor Nikki Woollatt, Independent for Cullompton North added: "Members of the public may well see this as a step towards unitary. To reassure everybody, I don't think there's any problem with having a consultation with the public prior to ceding any powers that we have held.

"People are going to start putting two and two together and if we're open and say we will consult, I think that would be for the benefit of the public."

She said: "The name of this outfit is misleading and I do think that it would be helpful it weren't called the Greater Exeter Strategic Plan because it makes the whole of the rest of the districts which are involved, subordinate to Exeter.

"None of those districts will want that and they don't see it like that and I think it would be helpful if you could perhaps consider giving it another title."

"I can give everybody's categorical assurance that I have not been at any point to discussions relating to forming a unitary authority that includes Mid Devon," he said.

"This is an excellent opportunity to reflect on how our residents and businesses live their lives across council administrative boundaries and to start embedding our shared aspiration for a successful future in plans for the Greater Exeter area."

Other council leaders have welcomed the GESP.

Councillor Jeremy Christophers, Leader of Teignbridge District Council said: "The creation of a strategic plan across a wider economic geography responds to how people actually live their lives.

"Combining housing options with job opportunities and providing the proper transport will support our ambition for local people to the live the lives they wish for. As councils, we need to work together to deliver better results for the future - clearly, this is the way forward."

Councillor Paul Diviani, Leader of East Devon District Council added: "It has been clear for some time that there was a significant gap left with the demise of the Devon Structure Plan and without wishing to re-invent the wheel, we should be establishing a strategic plan for our greater Exeter, greater Devon area which has input from Devon, Exeter, Mid Devon, Teignbridge and ourselves.

"We are the epi-centre of the Heart of the South West Local Enterprise Partnership and we need to ensure we have a central, aligned, significant role to play as we take our well-established partnership forward."

Cllr Pete Edwards, Leader of Exeter City Council said: "Every weekday 37,000 people commute into Exeter and 11,000 people head out of Exeter. These volumes are second only to Cambridge and it is imperative that we address housing, transport and infrastructure in a joined-up way to respond to this reality."

Councillor John Hart, Leader of Devon County Council said that the emerging relationship between the four authorities in preparing a single Local Plan for the area was a positive step.

He said: "It will help the planning system to work efficiently to boost the supply of housing and growth required.

"We are pleased and well-placed to be part of this collaborative way of working, which will improve and streamline our planning system."

"The District and City councils already have their own Local Plans and have been working together on planning issues for many years alongside the County Council. There is now much more expectation from the government that councils will work across their boundaries to deal comprehensively with development needs."

People in the area are being invited to share their views about the future of the Greater Exeter area and the key issues that need to be addressed. The comments received will help to inform a new joint plan that will identify the housing, jobs and infrastructure needs across the four districts in years to come.

A consultation is being held between February 27 and April 10 2017 for residents, developers and landowners to submit their comments, which will form part of the first phase of the plan preparation process.

Each council will also be holding exhibitions for the public to find out more about the plan: