How many oaks are in the Sid Valley?

Thanks to Victorian and Edwardian landowners, Sidmouth has many mature trees and the Park and Gardens around Knowle in Station Road are home to some of the finest and well worth a visit.

This month I want to introduce the oak trees in Knowle. There are approximately 600 different Oak species and Knowle is home to six of them: English, Sessile, Turkey, Red, Pin and Holm Oaks.

Holm Oaks are easiest to pick out because they are evergreen, with dark green leathery leaves that look a bit like bay leaves. Leaves on young Holm Oaks have small prickles, hence the scientific name Quercus ilex, which means Holly Oak. There is a magnificent pair of Holm Oaks in the Lawns area of the Byes and a large one in Powys which faces you as you walk out of Knowle Drive onto Station Road.

There are several English Oaks in Knowle ranging in age up to about 200 years old. One of two native species, the English Oak is a haven for wildlife from nesting birds to leaf-eating caterpillars. The leaves are the classic lobed oak tree shape on very short stalks. A distinguishing feature is that usually there are two small lobes pointing back down the stalk. The English Oak has an alternative name, the Pedunculate Oak, because its acorns are carried on stalks. 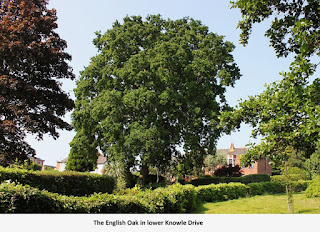 The other native species is the Sessile Oak. Sessile means without a stalk and this refers to the acorns which, unlike the English Oak, are produced very close to the twig. However, the leaves have longer stalks than those of their Pedunculate cousins, also they do not have the small backward pointing lobes at their base. Sessile Oaks are much rarer than English Oaks and the only one I can find in Knowle is a youngster aged about 50-70 years that stands by Balfour Lodge.
The largest tree of any type in Knowle is a huge Turkey Oak that stands inside the double gates on Station Road near the concrete base once used for the Folk Festival. At a height of thirty-four metres (110 feet) and with a trunk diameter of nearly two metres, this tree is about 250 years old. I defy anyone to stand under this majestic canopy and not to have a sense of awe. There is a smaller one which has very interesting, deeply cut leaves in the shrubbery behind the large Monterey Pine in the garden of Knowle. Turkey Oaks can be distinguished by their acorns which take eighteen months to mature and have a hairy cup. Unfortunately, the Turkey Oak is host to a gall wasp whose larvae damage the acorns of native British oaks.
On the western side of the park and walk car park is a large Red Oak. It is called a Red Oak because, in its native North America, its large leaves with their pointed lobes turn a glorious red in autumn. Disappointingly, they tend to just go rusty brown in the UK climate, but this is still a substantial tree. There are several younger ones around the park.

The sixth species of Oak in Knowle is the Pin or Spanish Swamp Oak. This has very deeply cut leaves which put on a good show of autumn colour. There are two beside the large Red Oak, another at the top of the large bank facing Station Road, and a third is struggling amid the brambles and rhododendrons as you enter the gardens at the southern end of Knowle Drive.

You can find out more about the trees in Knowle on this website and the Arboretum’s Sidmouth Town Trail leaflet takes you through Knowle.

How many oaks are in Kassel?

The play on words in German makes much more sense:

From Wikipedia, the free encyclopedia
Jump to navigationJump to search

7000 Oaks – City Forestation Instead of City Administration (German: 7000 Eichen – Stadtverwaldung statt Stadtverwaltung) is a work of land art by the German artist Joseph Beuys. It was first publicly presented in 1982 at the documenta 7.

With the help of volunteers, Beuys planted 7,000 oak trees over several years in Kassel, Germany, each with an accompanying basaltstone. In response to the extensive urbanization of the setting the work was an long and large-scale artistic and ecological intervention with the goal of enduringly altering the living space of the city. The project, though at first controversial, has become an important part of Kassel's cityscape.

The artwork, circa 2008.
The project was of enormous scope, and met with some controversy. While the biggest difficulty of the project was raising the money, the project had its share of opponents. Much of it was political, from the conservative state government dominated by the Christian Democrats. (The mayor of Kassel was a social democrat who stood by Beuys). Some people thought the black stone markers were ugly, even piling pink stones on the sites in 1982 as a prank. Also, a motorcyclist had died as a result of one of the stone markers. However, as more trees were planted people's perception of the project as a parking lot destroyer had met with increasing tolerance.[1]
“I think the tree is an element of regeneration which in itself is a concept of time. The oak is especially so because it is a slowly growing tree with a kind of really solid heart wood. It has always been a form of sculpture, a symbol for this planet ever since the Druids, who are called after the oak. Druid means oak. They used their oaks to define their holy places. I can see such a use for the future.... The tree planting enterprise provides a very simple but radical possibility for this when we start with the seven thousand oaks.” (Joseph Beuys in conversation with Richard Demarco, 1982 )
"The planting of seven thousand oak trees is only a symbolic beginning. Contrary to its initiative, progressive features such a symbolic beginning requires a marker, in this instance a basalt column. Future goals for the project included: a) an ongoing scheme of tree planting to be extended throughout the world as part of a global mission to effect environmental & social change "the purpose of educational activities"; b) a growth of awareness within the urban environment of the human dependence on the larger ecosystem educational outreach ; and c) an ongoing process whereby the society would be activated by means of human creative will social sculpture."
Beuys' art works and performances are not about entertaining and amusing the audience. It is an awakening message from the tradition, a recognition of the whole based upon a new concept of beauty that extends beyond the instant gratification.
"I not only want to stimulate people, I want to provoke them." (Bastian, Heines and Jeannot Simmen, "Interview with Joseph Beuys," in the catalog exhibition, Joseph Beuys, Drawings, Victoria and Albert Museum, Westerham Press, 1983, no folio)
It is a movement from the tradition, the expected, and the established for an inclusive openness. Completed in 1987 by his son, Wenzel, on the first anniversary of his father's death (and included in documenta 8), the project is still maintained by the city.[2]

Beuys' 7000 Oaks work is an example of the thread that links the Situationist International's approach to art and its re-creation by new groups continues to evolve through a new generation of socially conscious organizations that merge art, education, and environmental issues in their work. In 2000, the Center for Art, Design and Visual Culture (out of the University of Maryland, Baltimore County) developed the Joseph Beuys Sculpture Park and Joseph Beuys Tree Partnership and planted over 350 trees in various parks in Baltimore Parks with the help of over 500 volunteers including children from local schools.[3] The project was organized around Beuys' philosophy that ‘everyone can be an artist’ by acknowledging the creativity inherent in volunteers planting trees on their own. The goal of the project was also to “extend the traditional role of the art gallery so the gallery extends out into the city”.[4]