Last month, there were efforts made by all to keep down the plastic pollution:
Futures Forum: Trying to keep Sidmouth plastic free during Folk Week


Record numbers of volunteers are anticipated this weekend to help clear litter from the UK’s beaches, in the 25th annual Great British Beach Clean organised by a leading marine charity.
The Marine Conservation Society (MCS) has been running the four-day beach cleaning event for the last 24 years and expects the 2018 event to beat all previous records. Originally a modest citizen science project, it has become the largest and most longstanding beach litter survey in the UK, with all items recorded according to an internationally agreed methodology.
In 2017, 6,944 volunteers attended beach cleans at 339 locations all over the UK from the north of Scotland to Cornwall, Northern Ireland to the Channel Islands. This year, before any litter has been picked, 7,391 volunteers have pre-registered at 432 coastal spots.
Last year’s helpers retrieved 718 bits of rubbish from every 100 metres cleaned – 10% more than in 2016.
Much of the waste was plastic, prompting the MCS to call on the government to urgently introduce a charge on single-use plastic items, such as straws, cups and cutlery.
Litter classed by the MCS as “on the go” items made up 20% of all rubbish found on the UK’s beaches, while 63% was dumped by the public. The charity categorises drinks cups, plastic cutlery, foil wrappers, straws, sandwich packets, lolly sticks, plastic bottles, drinks cans, glass bottles, plastic cups, lids and stirrers as “on the go”. Shockingly, there was a 94% rise in the number of wet wipes found on UK beaches in a single year.
More unusual items retrieved in previous years include; an artificial Christmas tree, socks, pants and bras, dentures, half a canoe, a French bullet proof vest, and half a TV set.
Lizzie Prior, MCS beach and river clean-up project officer, said previous years’ experience showed that numbers registered pre-event could triple over the weekend itself. “Last year, by this time, a couple of thousand volunteers had registered, but our final figures were just short of 7,000. Since then, we’ve seen the BBC’s Blue Planet II effect, so that more and more people have been keen to clean beaches at our many events throughout the year. We hope it’ll make this year’s Great British Beach Clean the biggest, by volunteer number, ever.”
The Great British Beach Clean is sponsored by Waitrose for the second year in a row, with cash from its carrier bag sales in England supporting MCS’ year- round beach clean programme. “Our coast is important to all of us, so the Great British Beach Clean is a key opportunity to reduce pollution, especially from plastics,” said Tor Harris, head of Responsible Sourcing and Sustainability at Waitrose.
Record numbers expected for annual British beach clean | Environment | The Guardian

And the Sidmouth Plastic Warriors will be there: 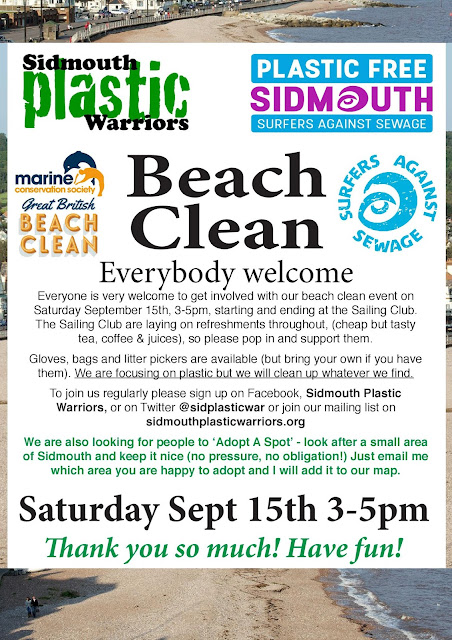 Thanks for your informative words you shared awesome article and I hope you will write on meet and greet at manchester as well thanks in advance.