An article in the Independent a few years ago pointed to a trend which has been realised since:

BYE-BYE TO THE B&B

Fusty bed and breakfasts with their loud carpets and louder landlords have remained stubbornly unchanged for decades. And now they could be facing face their final chintzy curtain.

The expansion of budget hotel chains and the emergence of travellers with high standards but tight budgets, are forcing the old-fashioned, low-grade guest house out of business. More than 1,500 B&Bs with fewer than three stars have closed in England since 2007, a cut of more than a third. In Scotland, one- and two-star B&Bs are down by 63 per cent, while the number of budget hotels is up 80 per cent. A third of guesthouses and B&Bs in the UK report having fewer guests in last month's school half-term than in 2010.

It could all spell the end of shared bathrooms, early breakfasts and nylon sheets. And one man, it seems, must take a large share of the blame – Lenny Henry. The comedian, actor and star of Premier Inn commercials has become the figurehead for the explosion in budget hotels.

Alex Polizzi, Channel 5's Hotel Inspector and granddaughter of the hotelier Lord Forte, said. "I am not at all surprised budget hotels are killing off the grotty B&B – and I am quite pleased. B&Bs got a bad name because of the standards. I get depressed at how often I have to say cleanliness is important. People are being more discerning."

Despite the economic gloom, tourism remains one of the UK's economic success stories and the advent of the "staycation" has helped the industry survive the downturn. However, B&Bs have seen sharp drops in bed occupancy rates in the past year or two. In hotels, bed occupancy is also down, but to a much lesser degree.

Premier Inn, Britain's biggest budget hotel chain, has huge expansion plans, including doubling in size in London by 2016. Patrick Dempsey, managing director of its parent company, Whitbread, said: "Our growth means that we can offer even more people a great night's sleep in the best locations."

Bye-Bye to the B&B | The Independent 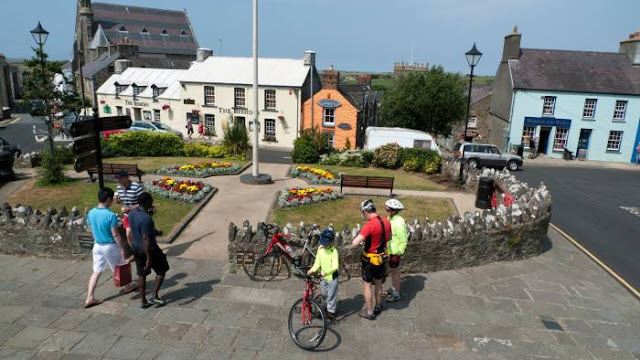 If all goes according to Whitbread’s plan, the first sight to greet pilgrims approaching St Davids and the holiest shrine in Wales next year will not be the tower of the city’s medieval cathedral but a new Premier Inn.

Residents in this enclave of south-west Wales are in uproar. Although the community of some 1,300 people is just a drop in the ocean of Whitbread’splans to reach 100,000 rooms nationwide by 2020, a vociferous No Premier Inn (NOPi) campaign is proving to be a case study of how a multinational deals with a local revolt.

The city (locals bristle at the tag “village”) and the windswept St Davids peninsula with its sea-lashed cliffs have so far escaped globalisation, preserving a spirituality enhanced by its history of numerous saints.

Narrow streets and stone houses feature almost exclusively with independently owned shops, galleries, B&Bs and eateries. The proposed Premier Inn, with 63 rooms, 160 beds and a restaurant, would be three times bigger than any other hotel here. 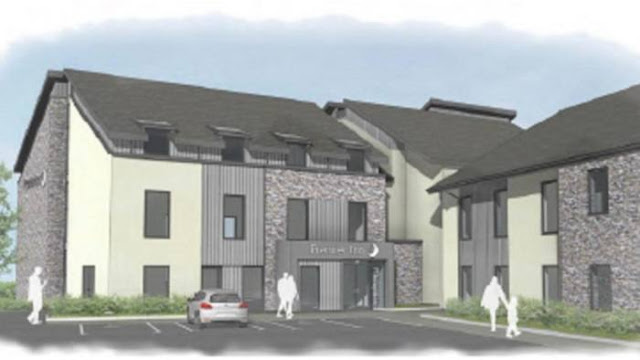 Artist's impression of the Premier Inn, which would be three times bigger than any other hotel in St Davids

Whitbread says the hotel will provide 20 jobs and attract more visitors to boost the local economy. Residents reply it will hit local accommodation providers hard, extract profits for Whitbread shareholders, and rob St Davids of the distinctive character that has drawn visitors for centuries, including Joseph Turner, who painted its ruined Bishop’s Palace in 1795.

Neither will Whitbread source its supplies locally. It says food, drink and linen will be trucked in, with more than 450 deliveries a year.

“Premier Inn will just wipe out everybody,” says Tracey Foster, who has run a guesthouse for 30 years and, among other things, takes exception to Premier Inn’s purple branding. “All my German, Swiss and Austrian guests say what a beautiful unspoilt place. Do you really want to turn around and see a big monstrosity of a purple sign outside it?”

With more from Wales Online:

Not in my town: Farmer Gerald Miles is against the building of a Premier Inn in St Davids (Image: Mike Walters)

As you drive into the smallest city in the UK, the first things that strike you are the quaint shops, inviting cafes and restaurants, unadorned pubs and charming B&Bs. They’re nearly all independent. And several of them have the same sign in the window. In the instantly recognisable bright purple of one of Britain’s biggest hotel chains it says this: “No Premier Inn St Davids”.

When you head down a stony side street fittingly called The Pebbles, St Davids’ jewel hits you: the magnificent cathedral and adjoining ruined palace that mark this place out as strikingly unique and hugely important to Welsh histoty.

From lovely old town to fabulous, historic city - in the space of 30 yards.

So when hotel giant Premier Inn revealed its plans to build a 63-room, three-storey hotel within a mile of the cathedral, the reaction of some of St Davids’ citizens shouldn’t be too hard to imagine. The plans are part of wider proposals to develop land on the way into the city. It would include around 75 new homes, some of which would be available to rent from a housing association.